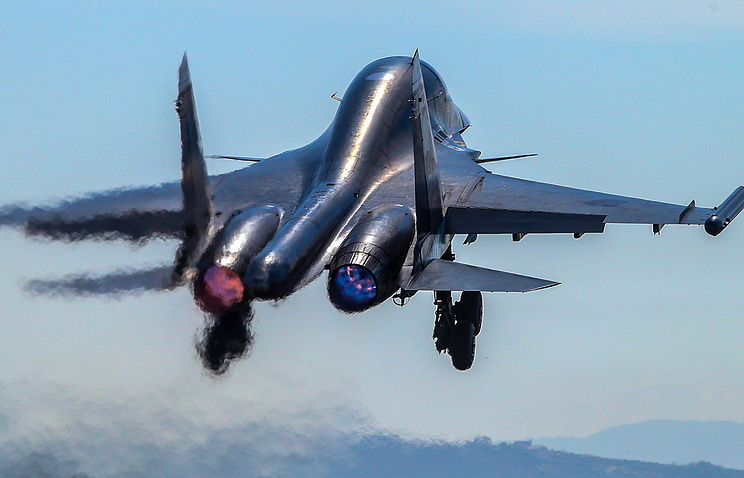 On March 5, warplanes of the Russian Aerospace Forces carried out several airstrikes on the town of Ma’arrat Misrin in the eastern part of the Syrian Greater Idlib region.

The airstrikes, which were carried out by Su-34 fighter-bombers, wiped out several positions in the outskirts of Ma’arrat Misrin, a stronghold of al-Qaeda-affiliated Hay’at Tahrir al-Sham. According to the London-based Syrian Observatory for Human Rights, the airstrikes didn’t result in any human losses.

The area between Ma’arrat Misrin, Kafriya, al-Fu’a and Binnish is infested with foreign jihadists. Many headquarters and camps of al-Qaeda factions are also located there.

The airstrikes came on the first anniversary of the ceasefire in Greater Idlib, which was reached in a meeting between Russian President Vladimir Putin and his Turkish counterpart Recep Tayyip Erdogan.

A year into the ceasefire agreement, the situation in Greater Idlib is still far from being stable. Several terrorist groups rule the region.

Turkey deployed thousands of troops in dozens of posts in Greater Idlib. Yet, ceasefire violations take place on a daily basis. Furthermore, Ankara has failed to open the Lattakia-Aleppo highway, the M4, so far.

Damascus and its allies, first and foremost Russia, have stepped up their attacks on militants in Greater Idlib. However, a full-on operation in the region seems unlikely.

I keep telling this to the various tukish guppu moghal around here that Russia, China and Iran will dismantle their Al-Qaeda country, but it don’t register with them. The hilljack won’t fight for them…….not goin happen!

So it was a reaction from minus to smile for nice airplanes with nice well know relios photos on.

Dont worry. It wont happend. I have minefields around me because of someone like You.

Maybee Your ears are not big enough:)

No, they know the plan is on track…….asiatic mongol republic will be dismantled. No other way to handle this.

My world is not as small and narrowminded as You. If You can read I support terrorists You insinuate, You should go back to childhood and begin with Duplo and later on Lego.

Putting in mongols in this just say how You are Yourself in geografy and history.

And when was it? Turks came from north of the black sea and caucasus 5.000 years ago, which also is proven by that.

So as a minimum You have to go back 5.000 years – and next they went to there from Mongolia by bicycle or what ??? And one more thing: Whats wrong with people comming from Mongolia.

Created hitosry also say we came from Adam and Eve and later on someone stranded on mount ararrat with Noah as pilot.

..And You are the reason for them

Chinese soon will be Your next first language

As long as You all kill each other, its fine with me. If not, its not.

This ain’t about muzlim ya dumb cvnt. Nobody here cares about religion. Only you peddle it cuz you ain’t got any feet to stand on joker…..lol

Oh look, that long dead dream of the Zios. Now they’re clinging to a fraction of a fraction of that and have lately been packing quite a lot. Sinai, Suez, then Southern Lebanon and Gaza. They will lose more if they keep on dancing with the devil on every bit of their fake borders in occupied areas. Too bad the pro-peace camp pretty much died forever in Israel ever since the Netanyahu-engineered assassination of Rabin… that was maybe the only time when long-term settlement and stability could have been a prospect in the region. Of course something had to be done to perpetuate chaos instead !

Communisme was better. It took more years to collapse themself.

Selfie again. Use a mirror. It dont use electricity.

So what. All know that for years.

And what does Dementia Joe say about it? he should be angry at the Russians killing his soldiers, right after he took them off the terrorist list.

I’d imagine so,after a few minutes for it to sink in.

you know Houthis is better than Assad ?

I was presented for this: Clarence Spangle Jens Holm • 17 hours ago Я рыцарь Орден Дракона . . . убийца турок. and had to use google translate and thats several times form him.

So why not give back one and zeros as well.

Great blow those animals to hell,but there will be no real change until Idlib is liberated with a massive military operation,it should have happened before the ceasefire when the SAA were on a roll,they had just taken Sarabiq from the Turks and their terrorists,now it will be a bigger job.

You are still in the fanatisme, that You think thos epeople in Idlib are more liberated for decades right now.

You still deny to wonder why millions and millions dont support the devastating non and wrong develloping grabbing terror system by Assds.

by golly gosh darn don't ya no