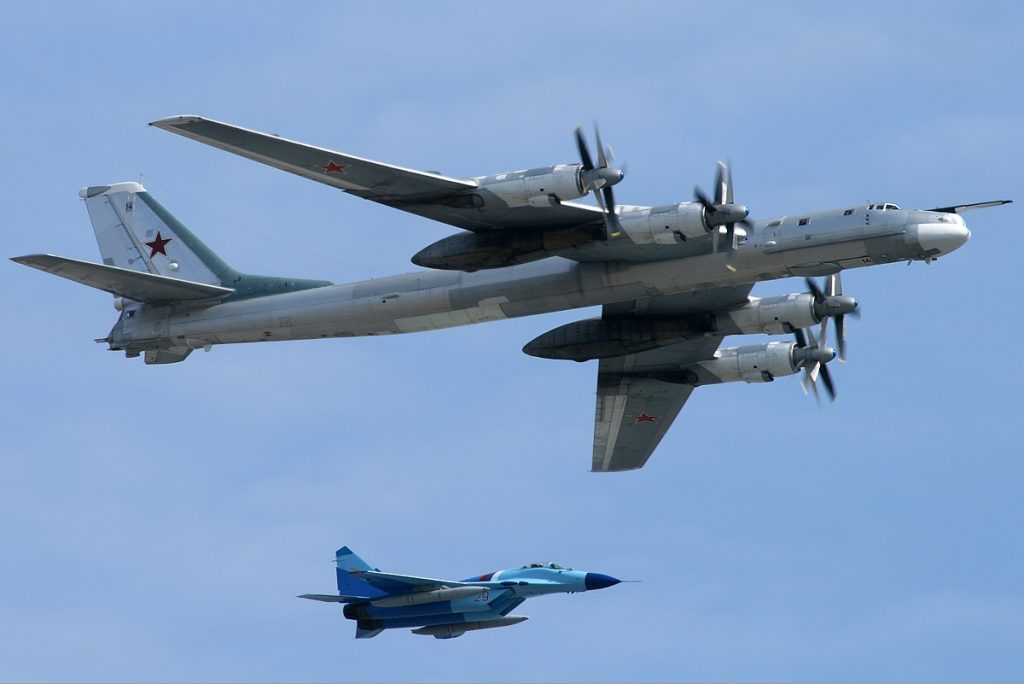 According to the Russian Defense Ministry, the cruise missile strike destroyed three large arms and ammunition depots, and a terrorist command center near the city of Uqayribat in the province of Hama.

The strike was made from the range of about 1,000 kilometers. The Tu-95MS bombers took off from an airfield in Russia. The Russian Aerospace Forces’ Su-30 fighters based in Syria prvided air cover for the strategic bombers.

Russians are bombing shit out of USA/Nato,Turkey,Israel,Saudi and Jordan terrorist.

Uqayribat Is being softened up to crumble any ISIS attempt to make a stand there, Salamyah – Uqayribat approach will dismantle all ISIS positions in the area.

The periodic strikes with Kalibers and Kh 101 missiles from various platforms is a strong indicator that Russia is practicing the destruction of NATO (or any other enemy for that matter) infrastructure. Since its own air force would be challenged to fight NATO successfully in the skies for longer than a day or two- due to the limited number of fighters and bombers it can field (I guess the ratio is about 4 to 1 in NATO’s favor- Russia must have reasoned that striking the NATO infrastructure in Europe and Middle East is the only feasible solution to bring the forces in balance or better bring NATO generals to their sense and dissuade them from even attempting anything foolish.

Luckily Russia has variety of lunching platforms for these advanced missiles and their numbers is only likely to increase in the years to come ; so, unless the Neocons and the Zionist are in suicide mode, that should give US and NATO a pause from attempting any stupid moves around Russia’s borders. As far as missile technology is considered, my bet is on Russia’s engineering. They may be behind US in fighter jets and naval assets, but when it comes to missiles, armor, reactive artillery and electronic warfare my bet is on Russia.

On what kind of dope are you?

No dope, he is saying russia would nuke NATO airforce on the ground, which is of course true in the case of WW3.

Too much vodka brings on delusions of grandeur.

More like too much Schnapps brings on your delusions of Grandeur. Or you hitting the pipe ?

Nope. Gave that up years ago. Can’t do that young man stuff anymore, but do enjoy a good Scotch.

Best scotch I ever had was Tullibardine 1988, i got it in 2007 after I graduated from collège.

I guess: Mid-pubertry almighty syndrom. But good news: normaly this is just a passing phase… ;-)

Unlike your Down syndrome…

Kaliber, KH101, Iskander missiles would pulverize command, communication centers and airfields all over NATO, Russian generation +4 fighters and fighter bombers outclass F-16s and Typhoons, I would take a Suk 35 over Typhoon any day. Yes, the Russian aircraft numbers are not there yet, however, their acquisitions continue at full speed and by 2025 they will have sufficient numbers. Air superiority quality aircraft coupled with a layered deadly surface to air defense, and an advanced point location A2/AD in Kaliningrad would give the Russians air control over Europe.

Now you have done it. What you forget is Russia is the sole superpower on earth (in the minds of the southfront posters). They are obviously the most powerful military force on the planet. This is why in some posts these same people that will now attack you will point out Nato expansion as a clear sign of Russias power. Sanctions are mere tools for Russias own economic benefit. Russia allows the US to fly gigantic slow moving cargo planes into Syria on a daily basis and Russia allows the US to fire cruise missiles at Syria as well as IDF air raids out of simple fairness to there military counterparts. In short dont come here with any factual information or logic. It does not apply. Its obvious to all the Russias 50 su 35s would defeat all of Nato in a mere few hours.

How many do they have? How many are they able to produce?

This is a warning.

This missile could easily be used to nuke israeli nuclear silos…

They would never attack Israel though

Never say never, i have never imagined Russia to have war with Georgia or terrible relation with Ukraine.

Israel is stepping over the line, a warning is a warning.

Dream on, sleep we´ll, and thank you for the fish!

Whho is dreaming you idiot?

This is a nuclear capable high precision stealth cruise missile, there is nothing to conjecture here, using it on IS is a complete overkill.

A very fertile opportunity for Russia to test all sorts of new weaponry. THIS IS a leaf that Russia has picked out of US books only difference being that US did this always illegally on innocent population e.g Vietnam, Afghanistan, Iraq, Libya, Syria etc and Russia is doing it on murderous scum dogs. Successful participation in Syrian quagmire is certainly going to pay Russia in long term.

They drop to the right altitude and they fire the engines very accurate missiles , think NATO is worried at seeing the precision.

Accuracy should surprise no one, because GLONASS is operational for some time.

I hope this support continue constantly without any stop up to the end of the terrorists (all of them).