In recent days, speculation has swirled regarding whether another chemical-weapons attack will soon take place in Syria, as sources in both Syrian intelligence and the Russian military have warned that U.S.-backed forces in the U.S.-occupied region of Deir ez-Zor are planning to stage a chemical weapons attack to be blamed on the Syrian government.

Concern that such an event could soon take place has only grown since the U.S. government announcement this past Thursday that the U.S. would provide$6.6 million over the next year to fund the White Helmets, the controversial “humanitarian” group that has been accused of staging “false flag” chemical weapons attacks in the past. Notably, the White Helmets were largely responsible for staging the recent alleged chlorine gas attack in Eastern Ghouta, which led the United States, the United Kingdom and France to attack Syrian government targets. That same attack in Eastern Ghouta had been predicted weeks prior by the Russian military and Syrian government, who are warning once again that a similar event is likely to occur in coming weeks.

An additional and largely overlooked indication that another staged attack could soon take place has been the recent movements of U.S. military assets to the Syrian coast, particularly the deployment of the Harry S. Truman Carrier Strike Group (HSTCSG).

As MintPress previously reported, the deployment of the HSTCSG – which consists of some 6,500 sailors — was first announced in April prior to the U.S., France and U.K. bombing of Syria. However, the group did not arrive until after that bombing had taken place.

While the April bombing was called a “one-time shot” by U.S. Secretary of Defense James Mattis, the fact that the Truman strike group’s deployment to the region was not canceled after the bombings occurred led some to suggest that the U.S. may have been anticipating more strikes against Syria’s government in the coming months. Indeed, soon after the U.S.-led bombing of Syria, U.S. Ambassador to the United Nations, Nikki Haley, declared the U.S. was “locked and loaded” should the Syrian government again be accused of using chemical weapons.

Now, amid claims from both the Syrian and Russian governments of another chemical weapons provocation, as well as the U.S.’ renewed funding of the White Helmets, the strike group’s deployment directly off the Syrian coast has only given greater credence to those previously voiced concerns.

According to a recent announcement from the U.S. Navy:

Bringing the Harry S. Truman strike group back into the fight against ISIS sends a powerful message to our partners that we are committed to peace and security in the region, and anywhere threatened by international terrorism. Once again, we demonstrate the incredible flexibility and capabilities of a carrier strike group: we are combat-proven and ready to answer the call anytime and anywhere to carry out any mission we are directed [sic].”

The statement also noted that fighter squadrons would be working with the strike group to “conduct precision strikes on ISIS targets” as part of the U.S. coalition’s Operation Inherent Resolve, which claims to be aimed at eliminating the presence of ISIS in Syria and Iraq. In addition to the strike group, a reportfrom SouthFront last month provided evidence that the U.S. had recently established a military garrison near the Jafra oil field, the exact location cited by both Syrian and Russian sources as the likely location for the future staging of a chemical weapons attack.

Fog of war: U.S. aiding the very terrorists it vowed to exterminate

While the U.S. has publicly claimed to be moving military assets as part of its campaign against ISIS, the fact that the U.S. has recently been accused of aiding ISIS in Syria — both as a pretext for its indefinite occupation of Syria’s Northeast and as a means of distracting and weakening the Syrian government that it has long sought to topple — casts doubt on the official narrative.

Indeed, since the U.S. and its proxy force, the Syrian Democratic Forces (SDF), took control of northeastern Syria – nearly a third of the entire country – last November, neither group has done anything to target the ISIS pockets in the area until the recent June 4 announcement by Mattis that the U.S. and the SDF had “re-commenced” their offensive after a lengthy hiatus. The U.S. has yet to offer an explanation for the hiatus and reports have not yet surfaced regarding the specific actions of the new offensive to target ISIS.

However, during the “hiatus”, and despite its occupation of the territory, the U.S. has re-trained ISIS fighters and regrouped them into small militias which have been placed under the SDF banner. In addition, SDF defectors have asserted that the U.S. and SDF regularly collaborate with the terror group. 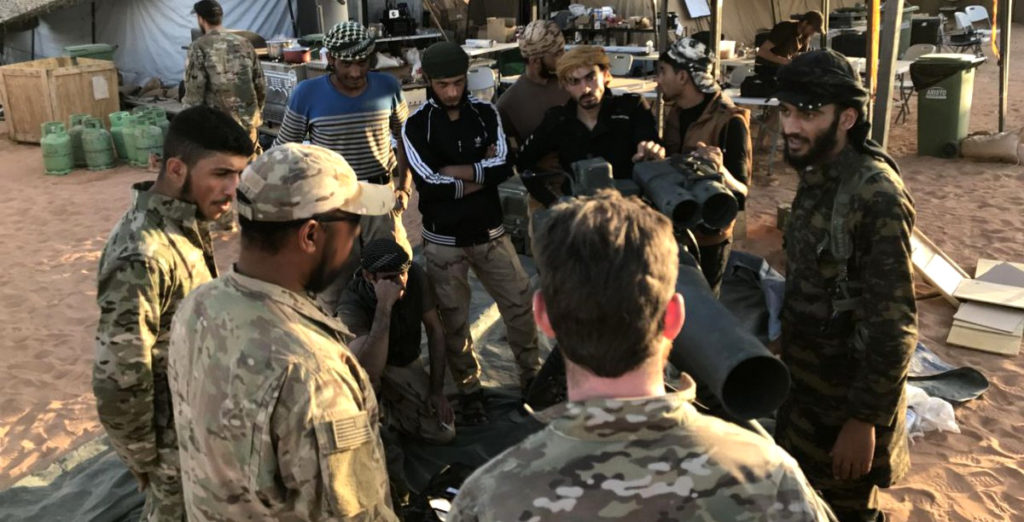 More recently, the U.S. again threatened the Syrian government over the latter’s planned offensive aimed at removing militant groups from the Dara’a governorate in the south of Syria. On Friday, the U.S. State Department announced that the U.S. would issue a “decisive response” if the offensive goes forward as planned. Given that the militants in the Dara’a governorate are either ISIS, Al Qaeda or their affiliates, the U.S. threat against a Syrian military offensive targeting these groups has been largely interpreted as a U.S. move actually aimed at protecting ISIS and Al Qaeda.

Given that the U.S. has been documented to be retraining ISIS fighters and protecting ISIS in the portion of Syria it occupies and elsewhere in the country, the movement of U.S. military assets such as the Truman strike group suggests that the official claim that those assets will be used in “the fight against ISIS” may not be what it appears.

Indeed, accusations by Russia and Syria of an imminent “false flag” chemical weapons attack, as well as the U.S.’ renewed funding of the White Helmets to the tune of over $6 million, instead suggest that the Truman strike group’s new deployment to Syria is in preparation for the U.S.’ predetermined response to anticipated accusations regarding the Syrian government’s alleged use of chemical weapons.

.. And the other one “on stand-by”.. http://www.informationclearinghouse.info/putin-nat.jpg

It is my hope that this is part of the faction left over from the previous regime, and that they get their butts handed to them.

This guy (?) might have some latent interests in Syria too.

proves my point…..onw world government with jerusalem as its capital, under satanic jewish leadership……..and they are all in to it..usa,russia,eu,china etc,…which countries do not recognize iSRAEL…..those are the onew being hammered now, in syria, russia is playing a double game(we are here to help SAA), turkey is playig a double game(we are here because of kurdish terrorists),usa/nato are playig a double game (we are here because of ISIS)….there is no good russia or bad russia, there is no good usa or bad usa, there is no good eu or bad eu, there is no good china or bad china….they all have the same agenda………..like a coin… russia and usa…..two sides but still the same coin..the same AGENDA….jemen is too a great example of russias and natos double gaming…all UNSC agreements on jemen just help one party…the party of the invaders..that includes banning all weapons delivery to the houthis but not to the invading forces, on the contrary…the invading forces get tons after tons of the most modern weapon systems. The upcoming SAA offensive in the south-west daraa area will bring light to alot of questions.40,000+ SAA soldiers will start trying to take back their homeland….will they get ambushed by nato airforce?by israeli airforce?what will their so called allied nation russia do?This offensive will change the momentum in one way or the other….if no bombing ambush occurs then the SAA will win this battle in less than 2 weeks bacause of the overwhelming man and military hardware power which would then again make this army of 40,000+ look for its next targets up north or in the east……if the SAA gets bombed and butcherd by nato/israeli airforce this would not only be catastrophic for this part of the SAA army but catastrophic more in the sense it would send a message to other SAA groups, to opposition fighters including SDF and ofcourse to the jihadis that we (nato) control the skies.If this should occur , its all out war from that moment on for syria,lebanon(hezbollah) and iran.Those countries which do not recognize the satanic jewish illegal entity called israel.

a r u talking about the latest attack yesterday? not only did those pricks bomb SAA, but nato also bombed iraqi troops

Sadly, these US shannanigans will continue until they pay a terrible price.

If you want to read about some real war crimes, check this out.

And here is the whole collection https://pbs.twimg.com/media/DfoD4aDUcAAyZok.jpg

“Russian-Syrian Warnings of a Coming False-Flag Chemical Attack Have Ring of Truth” If you know it, then DO SOMETHING against it, bomb the sh*t out of that USrael8i g@rbage, don’t just sit there and take notice of that. People on the ground that like ASSAD risk their lives informing you about such actions in preparation.. and you RUSSKIS, with your cutting-edge technologies.. just make noise in your affiliated PRESS and MEDIA F*king “tango-dancing” with the filthy enemy :( Even call them “our Western partners” ( ???????!!!!! )