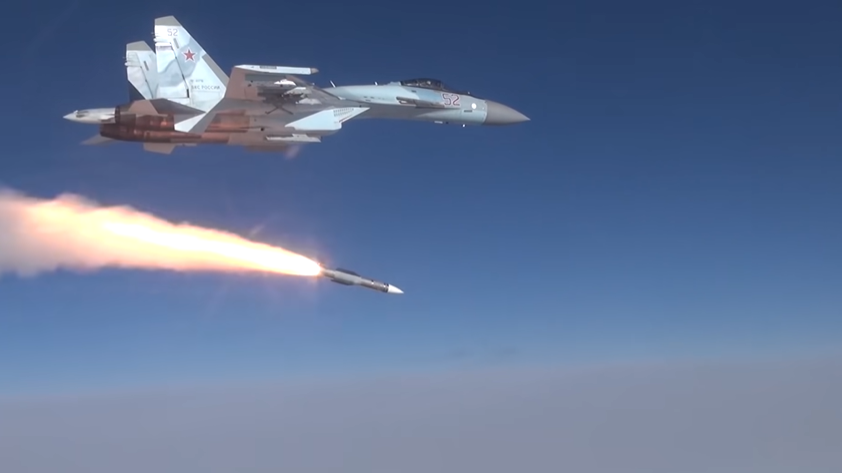 A Su-35S fighter jet of the Russian Aerospace Forces firing a R-37M missile during a test. Source: the Russian Ministry of Defense.

The R-37M was developed by Russia’s JSC Tactical Missiles Corporation (KTRV) to engage all types of aerial targets [fighter jets, bombers, transport aircraft, helicopters, cruise missiles and drones] day and night and under all conditions, including hostile electronic countermeasures, from a very long rang.

The missile’s range exceeds 200 kilometers, and it is capable of hypersonic speed, more than Mach 5, in the final stage of its flight.

The R-37M utilizes a complex guidance system. An inertial navigation system, built on high-precision laser gyroscopes, guides the missile for most of the flight path to the target. If the target suddenly changes course, the missile trajectory can be corrected from the launching fighter jet via a secured data link. The active homing radar 9B-1103M-350, which was developed by JSC Research Institute (Agat), is activated in close proximity to the target causing its warhead to explode and to avoid detection until too late. 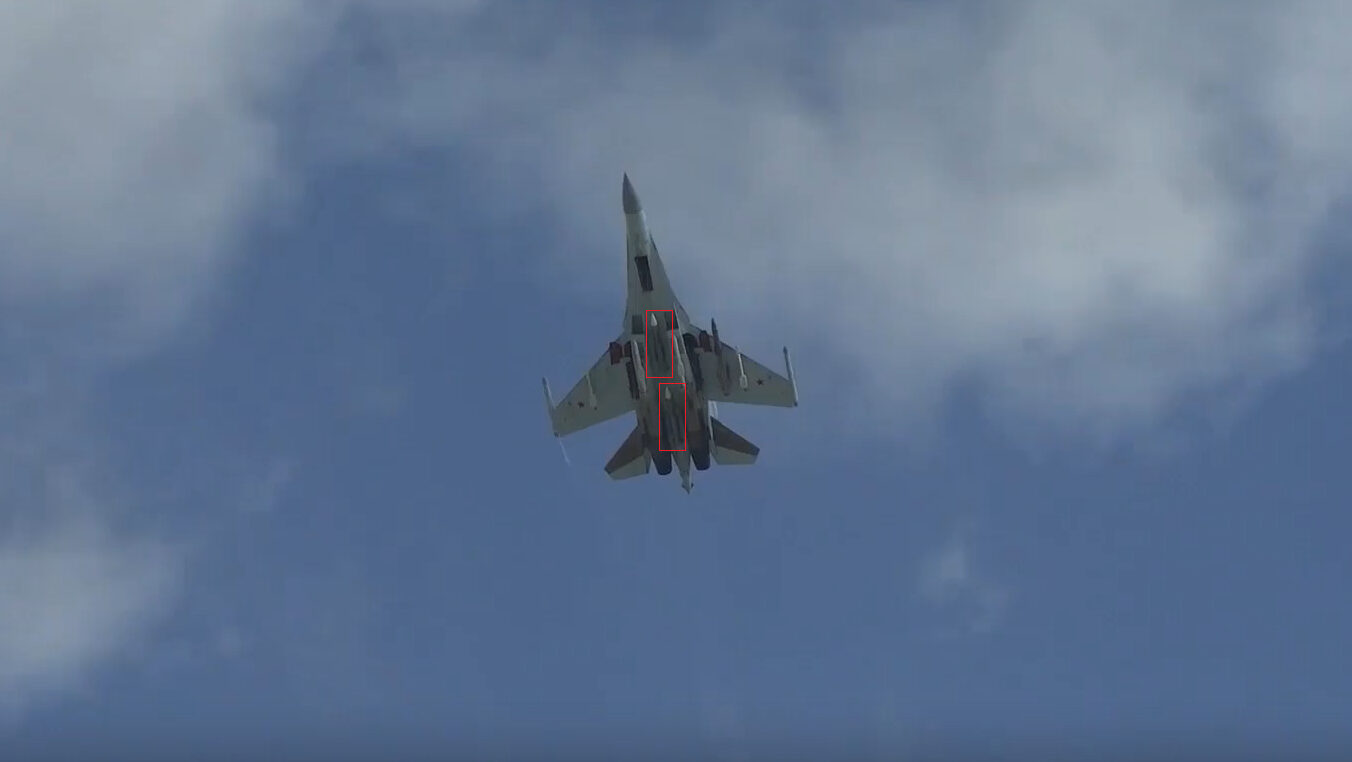 The use of R-37M missiles during the special military operation in Ukraine was first reported in October. Since then, several Ukrainian warplanes have been reportedly shot down with the advanced missile. In one alleged case, a Russian Su-57 used the missile to shot down a Su-27 of the Ukrainian Air Force (UAF).

The R-37M will further solidify the VKS air dominance over the theater of operations in Ukraine. The missile poses a real threat to the remaining capabilities of the UAF.

We are Hacking at the branch of r1a slavic communists who would turn on Ukrainians, who are the Rightful Exodus Jews, whereas putan is stupid enough to bet on satanyahu.

No slavs Except Ukrainians

Excuse me, but what are you drinking?

Do not transfer money to the owner of the site until he clears his site of Zionian queers. You don’t have to pay for a site like this. Let the fagots pay him.

I think it is no good idea to lead the missile by the jet. Why not using a laser pointer to mark the target by the missile and follow it until destruction?

Yes, but it seems that Ukraine has unlimited fighters because they are always around.

The NATO stooges keep delivering their old planes to the Ukranazees, right from the military museums in Warsaw, Riga, Prague etc.

And yet the proud people of Ukraine still kick the fucc out of the retarded russian trash LOL ,

Stop your gibberish and go and fight dumbass

Well there are only a few hundred soviet aircraft left in western stockpiles. Most of which are not flightworthy. They are spending millions to upgrade and maintain these planes to send to Ukraine where they are shot down in a glorious waste of western tax payer dollars. If you do not have control of the skies, you simply don’t use aircraft in such a manner. You establish a surface to air ground complex capacity to shoot down the enemy. Sadly this will never happen as doing so will require sufficient radar capacity which nato can only provide from external sources. Radars set up in Ukraine usually last a week or so before being terminated. The Russians recent pull from kherson has allowed a shift in combat experience and capable units to the east. There is also the notion that the Donetsk region might fall sooner to russian forces as the pace around Bakhmut and the capital is quickening. Additional there might be a thrust back into Kharkov region given the increase in russian activity along the border and northwestern Luhansk region. Some western military experts and even suggesting the Russians mighr pull off a winter offensive blitz which would be interesting.

LOL russia is doing very poorly in the skies of Ukraine with anything that flies , Russian invading trash is going no where but home and most likely in a bag , OH WAIT putin dont want to pay no poobles so maybe they rot where they dropped ha ha ha ha .

You aren’t crazy, you are stupid. My guess is that you are, like the dozens of Hunkies in Canada to whom I have spoken, completely wrapped up in the Ukraine narrative, ignoring the fact that a Jewish neo-con Victoria “Cookies” Nuland, ran a coup d’etat involving Ukrainian Jews Yatseniuk and Klitschko (and likely others). This conflict was inevitable, because the bankers need another war to cover for the “Great Reset” aka the next wealth transfer to the elite. You and your ilk are reasons why Trudeau v1.0, with his multiculturalism has destroyed Canada. If you have a hate on for Putin and Russia, go to Ukraine and fight. If you survive, stay there. We have no strategic interest in Ukraine, it is not a neighbouring country, nor does it have anything we need.

The Nazis of Ukraine are fighting not for themselves but for their western sodomite handlers.

Please stop using the fake “Nazi” narrative. There is nothing “Nazi” about these people. They are ulltra-Nationalist Galiceans long before the “Nazis” ever existed. Yes, there were the Bandera types who collaborated with Germany to rid themselves of the communists who had just starved millions to death, but that didn’t make them “Nazis”. Churchill, Roosevelt and the rest of the “free world” collaborated with Stalin to defeat Germany. Does that make them communists? What kind of “Nazis” would be in favour of not being neutral, joining the international banking cartel created EU, depending on the international banking cartel’s IMF run by the (((US Federal Reserve Bank))), having Jewish oligarchs, Jewish Presidents, and openly wanting to be a “big Israel”? It also plays into the Soviet/Russian lie of the “Great Patriotic War” https://defence.pk/pdf/threads/operation-groza-soviet-invasion-of-western-europe-july-6-1941.293859/

Ha ha ha how many of these shitt planes does the war losing wasteland have left , LOL not for long EH.

Russia has no air superiority or ground superiority. Russian forces are being expelled from Ukraine.

Ukrotard trolls failing and raging. What is the current total number of dead Ukrainian military personnel since 2014?

Lots i suppose, but surely not enough…..yet.

He’s not a bitch, just a mentally retarded guy who needs psychiatric help he can’t pay for. What say we start a small crowd fund………….!

By the way, the guy is so stupid he can’t even spell the Russian Defence Minister’s name correctly, haha.

His mother was a Jew whore who sucked donkeys in Tel Aviv alleys. He works the glory holes at the train station renting out his anus to Ethiopians.

I’d be impressed, if my brain didn’t warn me: “Soon the Ukrainian saboteurs/MI6/Mossad/Russian traitors will blow up the ammunition like they did in Saki airfield in Crimea, destroying all the aircraft too”. (and the Russian MoD said “no aircraft was damaged”)

Why moderator don’t kill this stupid ukie stack of shit?

Russia is making mistakes after mistakes in this war. These mistakes will inevitably lead to their defeat. Correcting them is not going to be easy and will definitely lead to more deaths of their soldiers.

I have never seen or heard in recent memory a country capturing territories and then willingly give them all back to their enemy without a fight. This is very incredible.

I’d be no shock if you’d kept good tabs throughout the Syrian conflict where the Soviets been doing the ‘pullback’ & the ‘loiter’ over & over again. I long ascribed it to deliberate Conflict-Extention possibly for troop training & weapon system fielding. The Prolongations could also be due to unspoken objectives or Alliances.

Lol what Ukraine airforce, it’s reduced to remnants now, good to take down what little is left but the main focus should be on blowing all bridges of the Dnipro now and battering all Ukro afilliated fighters with missiles and artillery.

Do exactly what Cocainsky threatened to do do Crimea, push back, get their backs to the dnipro river and make them stay there.

Whomever is spam your comments section needs to be stopped. Have someone track them and block them from posting. This is commercial terrorism and should not be tolerated. Thanks.