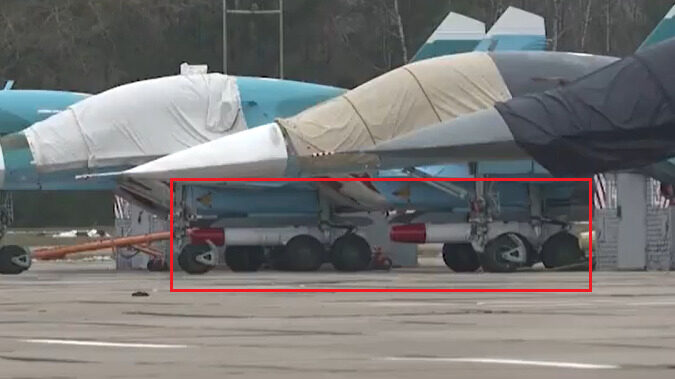 Screengrab from the Belarusian Ministry of Defense footage.

Russian Su-34 fighter bombers deployed in Belarus for joint air drills were spotted armed with Kh-35U cruise missiles in footage released by the Belarusian Ministry of Defense on January 19.

Belarus and Russia launched a series of joint military exercises on January 16. The air drills will be held until February 1 using all of Belarus’ military airfields.

The Kh-35U, which is the latest version of the Kh-35 subsonic cruise missile, was developed by Russia’s Tactical Missiles Corporation. While the original version was just an anti-ship missile, a land-attack capability was added to the new version. This explains why the missile was sent to the joint drills in Belarus, a landlocked country.

The cruise missile navigates towards its target using a GLONASS-aided inertial navigation system. For terminal guidance, the missile is equipped with an active radar seeker.

The missile has a maximum range of 260 kilometers with a speed of no more than Mach 0.85. It can fly as low as four meters before hitting its target. The air launched version is armed with a 550 kg high explosive fragmentation shaped charge warhead.

The Russian military has been using the air and ground launched versions of the Kh-35U to strike high value targets of Kiev forces since the beginning of the special military operation in Ukraine around a year ago.

Russia and Belarus stepped up military cooperation in the last few months in the face of threats from Ukraine and the NATO. Recently, Kiev have been warning from a large-scale Russian ground offensive from Belarus. However, even the United States does not agree with these claims.

Earlier this week, National Security Council official John Kirby said that the U.S. does not see evidence that Belarus intends to join the Russian special military operation in Ukraine.

The judgment day is coming for the Nazis. And their collaborators.

Russia Is Looking Like A Fool, No Really!
Reply to  1 poseidon nuke enough to tsunamize the whole UK

Even the leader of Belarus doesn’t respect Putin anymore, he was caught saying in a interview last year,that he couldn’t believe that the War was taking so long, even Putin’s Supporters know that the Russian Military is Incompetent and Belarus would be smart not to get dragged into a endless War with Russia

Because the Russians have Men and Military Equipment stationed in Belarus, but the Incompetence of the Russian Leadership and the Cowardice of the Russian Soldier will squander any Victory that would appear the Russians would achieve by starting a Winter Offensive, run away Belarus from Russia while you still have a chance, you only will be disappointed, like the Donbass Residents that continue to get shelled!!

Clyde
Reply to  Russia Is Looking Like A Fool, No Really!

No, really, there are a quarter of a million Russian soldiers currently operating on territory lost by the failed Ukrainian CIA project. You fucking imbeciles have been trying to take Donbas for nine years and now you’ve lost two more oblasts. The people who are fools are dipshit Ukretard imbeciles like you. Donbas residents get shelled because you and the rest of OUN 2.0 are degenerates.

There isn’t many fighting Ukrainians left, looks like NATO will be fighting Russia against the last Pole. Bring it on mudderfucker!

Natalie Biden was 13 likes this

Belarus knows that they have to support Russia, because if Russia loses, Belarus loses too. NATO has its plans ready.

Our plans are just as UN. The people in Belarus has to decide themself in normal way by one vote each making seats in a sober parlamant with a sober Governess.

Just as for Ukraine, they has the right to decide their own destiny and is no part of us as EU and Nato but in trade and devellopment, we are open for a something for something helping up their level.

Just as for Ukraine we want normal fare. It says visible effective systems with no corruption and oligarcs.

They also by that has to have a normal tax system, so tax go to schools, education, health, hospitals and a descent pension.

Most peole know we also has people and organisations, which sometimes becomes too big in a very unsuber way. We dight them almost all we can. It makes no sense to accept the Belarussins make even more of them home and here.

Tell that to the people of Donetsk.

I just tell how things are. Stalin and Krustjov created Ukraine being a greedy westwrad failure from the start later on even added Russians as a state in the state.

Just as for several other parts of USSR it was made, so USSR could inva de and protrct not only the minority but take the whole uprising state back.

Thats exactly what colonials as Britts, French and others has done. Most of that has been unsuccesfull too.

I decide nothing. But if I did many years ago, I would have voted 2 of those provinces back to Russia right away. They have own schools, own ideas by Moskva. All antennas are for Moskva as well.

We did that for Denmakr and Germany in 1920 and only took back half they took in 1864. Ever since we have had good relations both ways.People live in one country and work in the other one. Thet share hospitals, direbrigades and the police can cross free and fast, so criminals cant escape by leaving the country.

They also keep the nature well in the same way and museums has languages and sober telling about old days as neutral as it goes.

Russia and allies are going to steam roll, what’s left of ukranazis.

We all know. You are Lukashenko, Assad, Eritrea, Cuba and North Korea. More like aliens to the rest of the world to me.

China, India, Brazil, South Africa and many other nations also. Why don’t you tell the whole truth?

Russia should nuke Poland and cut off NATO supply to UA. This also will send strong message to NATO and many NATO nations will back off.

Are you serious nukes? are you an idiot or a skitzo no sane person would ever use nukes.

yeah, but what he tries to say, is that poland is a shit country so are the people…

Nukes means death for all of us not just for poolish

And the reasosn for it: They made Russia as the only one loose WW1 three times. Next russia had to wait to get West ukriane until Hitler took the Polish western parts.

Next Rusticans ignored the uptise in Warzaw against Hitler, so many non communist was killed.

Next by that the Poles by very good reasons never has given full support for the USSR expansionisme as much as they could.

So today is different. Even Poland in many ways are small, they do support the rest there should be under low or none Russian influence. By that mainly West Ukraine is family but not Poland.

The Russians also has censured away that Pilsutsky Poland took away the hopes for autonomy or more for West Ukriane by defeating the nationalist there. By that it became Polish until Hitler and Staling divided Europe for a while.

Poles also do remeber the Molov trade with Hitler very well. We all do.

Lanza the white incel, you’re back!

Whatever you say, li’l white incel.

Why is it that all too many Military Minds the world over love to park vehicles in close proximity, especially in a conflict zone?

Surely it is more sensible to train soldiers in drills that better protect vehicles and soldiers alike.

I see 2 man reasons: 1) Stupidity and 2) lack of decentral distribution.

We have the too too much problems here too for hay. Yes hay. It sometimes gets in fire by itself and all of it burns away. Its should be divided, so they only might loose half or a third.

Risk spreading is no sciene.

I guess the German men shouldn’t have gotten themselves all killed trying to exterminate the untermensch on behalf of IG Farben and the Anglo-American bankers.

Even the leader of Belarus doesn’t respect Putin anymore, he was caught saying in a interview last year,that he couldn’t believe that the War was taking so long, even Putin’s Supporters know that the Russian Military is Incompetent and Belarus would be smart not to get dragged into a endless War with Russia

Because the Russians have Men and Military Equipment stationed in Belarus, but the Incompetence of the Russian Leadership and the Cowardice of the Russian Soldier will squander any Victory that would appear the Russians would achieve by starting a Winter Offensive, run away Belarus from Russia while you still have a chance, you only will be disappointed, like the Donbass Residents that continue to get shelled!

Clyde
Reply to  Russia Is Looking Like A Fool, No Really!

But you have to hand it to the Ukretards: they have an intense and unique ability to make themselves look like incredible dunces.

lol@ Ukraine ever thinking it was winning lol

it’s not easy trying to spare the population in a war. Despite everything, this is a commendable position for the Russians.But with intelligence and perspicacity, I hope that Russia does not leave these far-right leaders behind. in his bloodthirsty army. Up them Russia.