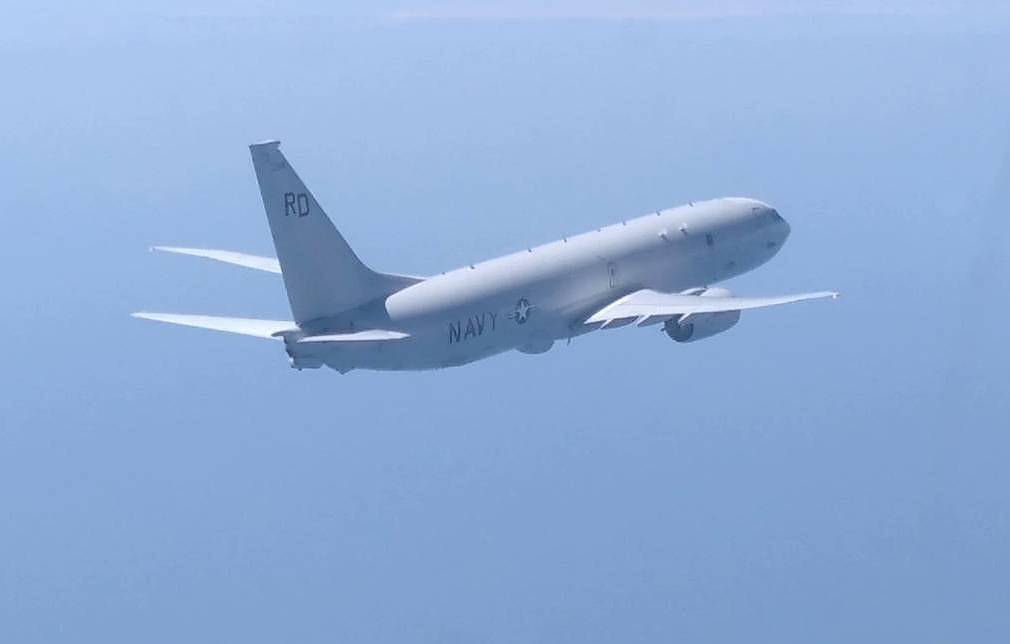 On July 31st, the Russian defense ministry said it had sent an Su-27 fighter jet to intercept a U.S. surveillance plane over the Black Sea.

The US aircraft changed its course away from the Russian border.

According to the military, on July 31, an air target approaching the state border of the Russian Federation was discovered over the neutral waters of the Black Sea, and a Su-27 was raised from the air defense duty of the Southern Military District to intercept it.

“The crew of the Russian fighter approached a safe distance to the aerial object and identified it as the EP-3E US Navy radio-technical reconnaissance aircraft,” the command noted.

This is the fifth such case in the last eight days, the previous ones happened on July 23rd, 24th, 27th and 30th.

In particular, on July 30th, the Russian Su-27 from the air defense unit of the Southern Military District also took to the air to intercept the US Air Force RC-135 strategic reconnaissance aircraft and the US Navy P-8A Poseidon base patrol aircraft over the Black Sea.

A video was released showing the interception.

The Russian National Defense Management Center noted that the entire flight of the Russian Su-27 aircraft took place in accordance with international rules for the use of airspace.

“The US reconnaissance aircraft have not violated the state border of the Russian Federation,” the Center added.

There were no clashes of any sort, and as soon as being intercepted all of the US aircraft returned to their host bases.

Interception is a waste, time to start shooting down the dumbass Americunt Pimpeovirus afflicted cunts. 150,000 of the deadbeat bankrupt scum have died of their own CIA fanned virus and 25,000 alone will die this week, and the stupid Jew brainwashed morons want to destroy Russia and control its immense wealth.

That would make USA forget of Iran sanctions in a matter of minutes :)

I’m sure the marines and the sailor didn’t expect that big AAV-7 amphibious beast to be their last resting place. Sh*t happens.

U.S. GPS system is absymal, they get lost multiple times a week, they should switch to Glonass… Thankfully Russia showed them the way home before they crashed into the sea. Safe trip home guys…

They just wanted to take some HQ shots of topless girls sunbathing on Crimea coast.

Russians do that with us here at Bornholm too.

Still searching for russian submarines in Stokholm sewer?) Come to WC with aware, may be you’ll see a periscope there.

We can do swimming in the Hrbour of Copenhagen. Bu the problem now is, that the big ceaning system has to be repaired and partky updatet.

And yes. When Russia deploy missiles in the middle of us in Kaliningrad, we fx buy 4 korvette Scud missiles and a bunch of smaller ones.

All should calm at least some down.

“Since then not even the US military have dared to enter Denmark.” It was very funny. Keep on.

We have the right to fly in International waterways of free navigation after the International Rules of Order of Freedom where an American want to fly. But as Russia dont want freedom, they are scared to death by our values and our democracy.

Therefore US Airforce will continue to circulate around Crimea where we invested $5 billion bucks, and give the innocent Crimean people freedom until Russia have understood it.

Its not the innocent civilians in Crimea that are wrong, they have done nothing.

Its the Russian Government who deny them the human rights to gay marriages inside a Church so they also can get Jesus.

…and thats not the only freedom thing they are being denied!

Looks like a quote form “Doctor Strangelove”.) Do you remember that insane general at air-force base? He spoke the same!

One of my favorite all time movies!!

So the conformal fuel tank on the SU-27 is actually a fluoride mister? This should help to prevent tooth decay in the region. :D

Is this meant as some form of sarcasm? It probably is, considering those Crimean people that I have personally spoken to (and a few of them actually consider themselves ethnic Ukrainians) have told me the exact opposite – a huge improvement in their quality of living after reunification. Russia has also invested massively in the region which has resulted in further benefits to the local population. Kiev, on the other hand, pretty much just looted the region after it became part of the post-Soviet Ukraine, resulting in certain industries to shut down completely, such as agriculture, which is now again thriving. Google “Crimea economy” if you don’t believe what my acquaintances there have been telling me. Trying to hand Crimea back to Ukraine would cause riots all over the region – I suspect most Western governments also realize this, as evidenced by the relatively half-hearted sanctions towards Russia, especially from the EU, which appears to be aimed more at resolving the situation in the Donbass than any real expectation around changing the status of Crimea.

It should be sarcasm, another way it was very stupid speech.

“they are scared to death by our values and our democracy”

Ha! Ha!! Ha!!! What freedom you say about after kidnapping people and torturing them in Guantanamo? What kind of freedom iraqis got after invasion twice? Freedom from their own life?

Innocent civilian people of Crimea have voted for Russia in referendum. Occupied serbian Kosovo – no referendum. This is about your democracy.

But the Atlantic pact still need to “hold russian afggression”.)

You totallly ignores or are censured away from,what Europe says about it.

Russains hardly can leave their contry with tanks unless we transport them and they have no money:)

In the other hand we never will accept Russian as Neocolonislisme against smaller and weeker states. Fx it also has been normal to trade with the Baltics more then 1000 years.

Russ even are the name for the trading there for Novgerod and Kiev all the way to Byzants and the Aral lake. So we see USSR as buillding a wall in everything and not only west of Berlin after WW2 and not Russia are “not agressive”.

They even took Bornholm in intensions to keep it. Thats how it was.

Are you trolling me?) Poor attempt.