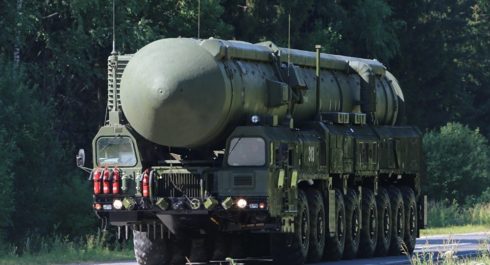 “Overall, 21 ballistic missiles, 19 autonomous launchers, 33 combat duty support vehicles, 7 command posts and 310 other integral parts of the systems were delivered,” the state-run news agency TASS quoted Stepanov as saying. “A total of six launches of intercontinental ballistic missiles were carried out in 2017 to extend the warranty periods for the operation of missile systems that are on combat duty, and also for training purposes. The hardware showed its operation in a normal mode and the assigned tasks were accomplished.”

In that case, Russia should donate its ‘old’ missiles to the Houthis, who have a few pesky neighbors that won’t stop meddling in their affairs. The invaders’ capitals need to be wholly transformed into a non-crystalline amorphous solid to ensure Yemen’s security. It’s the only way to be sure.

When you think about it, it’s sad that a country is forced to spend it’s resources on such horrible weapons instead of betterment of it’s population, because it is threatened by a bully and it’s mad puppeteers that don’t understand anything but the language of brute force.

It’s happening to Russia, to China and to my own country. In the meantime, we can be happy that a “first strike policy” and “preventive war” has no place on the table of strategic planners of these countries. It’s a sad truth that we need these weapons just to save ourselves from the common enemy.

Disclaimer: Such day may never come. I am not responsible in any form or shape for the bursting of warmongers’ bubbles and therefore cannot be liable for any kind of miscalculation, so there!

A superpower is required to develop weapons of such destructive powers to preserve the mutual assured destruction equation; the missiles in questions are the mobile Yars that provide a mobile element (that is able to deploy and maintain their locations uncertain) to a ground based ICBM force.

Yor take on Satan SS-18, consider its successor the Sarmat ICBM, if Satan was ugly and deadly, Sarmat supersedes the Satan by a wide margin.