Russia One TV channel in its weekly news program released possible targets in the US, which can be hit by the recently revealed Zircon hypersonic missile in the event of a hot war between the US and Russia.

According to the Russian sate media, these targets are:

Such reports in both Russian and US media show the current level of tensions between the sides, which is unlikely to reduce in the near future.


MORE ON THE  TOPIC:

mustn’t forget tel aviv in the first wave – a couple of dozens from the Caspian and the squatters are history!

Uhh, one would be enough. A couple dozen would seriously affect the whole mid-east.

We know Russia poured much of their defense budget on missile system. However this hypersonic missile will pass by NATO defenses system before it landed to different US targets.

European NATO theatre is out if the equation, since the described targets and the weapons range demands a relativ close-in launch.

If only you had been born with a brain?

Also, take out the US-bases on Guam and Diego Garcia, as well as the massive
Al Udeid Air Base in Qatar. Eliminating those three alone will reduce America’s strategic movement abilities at least by half.

I had to crop this picture to get it under 5mb so that it would upload onto the thread from my phone. 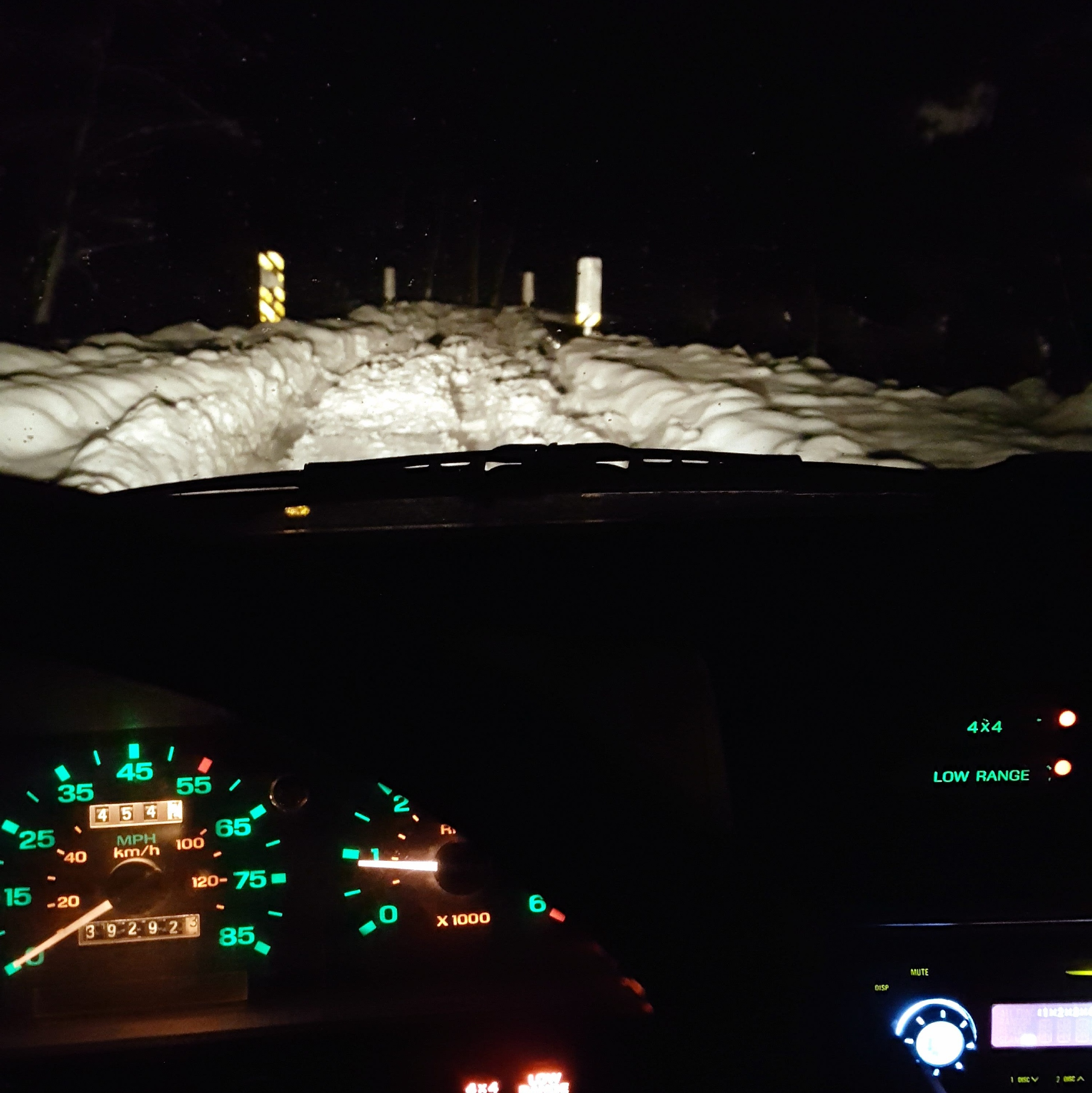 This is a river crossing from the ET/ED/non conventional contact op that I just got back from in the mountain wilderness. If I have to head for the hills if we get nuked. At least I’ll be better prepared for it than most people.

This is a report of an encounter in the US between US military and law enforcement and bigfoots involving murder, suicide and cancer. I would handle this type of encounter differently than they did.

Prior to my own close encounter with these creatures. I would have questionrd the veracity of this type of report. Now I’m inclined to think that it may be true.

The state police located a large pot plot in the wilderness 30 years ago. And perhaps something else. Because they called in not only the DEA, but also military.

Evidently the pot growers put out bear traps as booby traps and a female bigfoot with a young child stepped in one and was severely injured and crippled. When the military got there they encountered the mother and child, 2 adolescents, and a large male attempting to assist the injured female.

They were ordered to kill them all. The child and maybe 1 of the adolesents escaped. The male charged the soldiers and was killed. And the female was captured.

You have a very vivid imagination , sonny. You should consider writing fiction as a profession when you grow up.

I’m not imagining anything. I’m 60 years old and have more experience and first hand evidence of these matters than 99.9% of the population. But if doing the ostrich flat earther thing is your speed, have at it.

Wow, those are useless remarks. How the missile is supposed to travel 1000s of miles to strike the heart of the US when it’s range is 1000km only??

I thought this was an anti-ship missile. Not at all sure what this article is telling us.

This article should help. https://southfront.org/russias-zircon-hypersonic-cruise-missile-what-we-know-so-far/ Zircons are to be sea and air launched. This means ships in the Atlantic or Pacific, near US coast can hit targets. It can be used to attack ships or land targets. The range is also why none of the targets are near the central US, only near the coasts.

The article is selling bullshit so don’t buy it. Yes, the missile is an anti-ship missile. It cannot sustain a long flight because of its speed.

It could, of course, if it were an American one. But you American assholes can only whine about it….

You are forgetting that it is a scramjet, the range of a jet is much larger than a rocket. The US is working on scramjets, and Australia believe it or not has had more success than the Americans.

Why are you comparing scramjet with regular jet engines?

I did not compare scramjets to regular jets, because obviously they cannot travel at hypersonic speeds, I compared to a rocket motor.

Actually it’s not about engine, it’s about speed at material. At such high speed, the missile will simply burn if it flies long distances.

You assume that because the US has not developed a material or methodology to sustain high speed over long distances.

Many people such as yourself said that high speed torpedoes were impossible, until Russia developed supercavitating torpedoes.

‘What gets us into trouble is not what we don’t know. It’s what we know for sure that just ain’t so.'(Mark Twain)

I think I failed to explain. Ru says its missile has a 1000km range, which would make it a medium range missile. I think I am convinced with that. I was saying about very long range. lets say above 1500km. That would be impossible I think.

Similar to TLAM …. both land attack and anti-shipping variants.

It blows things up, ships cities, in fact anything flying the stars and stripes.

yeah…. these remarks dont help it at all. 1000km is already good enought to nuke the carrier battle groups

Why waste nukes to destroy carrier battle groups? Couple of hypersonic missiles will be enough.

It is a hypersonic missile you moron.

Yeah that’s what I am saying. You misunderstood. I said couple of hypersonic missiles (zircons) will be enough.

submarine, they’re all along the coast

It would be a suicidal mission.

” It would be a suicidal mission. ”

How , exactly ? You do realize , I hope , that a submarine is not a sitting duck like a destroyer or other surface naval vessel.

No not a suicide mission, but even if it was, I think that quite a few Russian sailors would sacrifice their lives if it meant that the horror that is America was destroyed for all time.

Suicide as in mutual assured destruction- MAD. The message here is that the US is far from invulnerable.

Russia’s new generation Yasen-class submarines are to be armed with the new hypersonic cruise missile.

Do you really think that the bombers will be able to carry the missiles off the coast of the US to deliver a strike on its heartland? I am also skeptical about submarines. Undoubtedly, this weapon is a great achievement for RU, but it was created for different purposes, not the one the article is telling.

Submarines are the key platform for stated targets. The aircraft launch capacity is incidental information – had assumed discerning readers would grasp that – as TU-160 is a supersonic Mach 2+ strategic bomber, the largest and fastest bomber in current use.

Zircon won’t be the only weapon used, the Sarmat is on standby plus Poseidon, Burevestnik, Avangard and the Shkvalthe fastest torpedo will be used against the US Navy. Looks like game is up for the US.

Understand this: russia has always maintained its capabilities to destroy US in the event of a war. Russians are already able to this without even the newest weapons that president putin unveiled. My whole point is, zircon has a different purpose. It was created to strike the surface ships, not the US mainland.

Most antiship missiles have a secondary land attack function. There’s nothing new about that. You’ve read about stealth from various coatings and body shapes designed to misdirect reflected radar waves. What if I told you that ionizing the airflow around an aircraft could make anything stealthy, even a gigantic blimp?

It appears you want to strike US with a specific missile at any cost. Why would you do that when can do so with ballistic missiles??

Yes, anti-ship missile can be used for land attacks, but why would you use a hypersonic missile for that purpose when you can do so with a subsonic missile?

War is not merely physical destruction, it involves psychological destruction as well. Missiles that cannot be stopped would directly impact on the sacred cow of American invincibility, something the PNAC references in its first paragraph of its manifesto.

Besides, the US has stated that it would view the use ICBMs as
an assumed nuclear attack, weather or not the ICBMs carried nukes or conventional warheads.

Hahahaha they’re going to hit us with their fake missiles

at it again white trailer trash exposing your witless ignorance and inability to be coherent or intelligence – truth is that moronistan (aka usa) is deadly scared of iran and the scars from vietnam is deep and won’t go away and that was a small agricultural minion that actually defeated the mighty but seriously stupid morons from moronistan. and iran is by far more clever (than any moron from moronistan) and far more deadly than vietnam so donny, being slow, is right in not going for an outright attack on iran – it’s a defeat waiting to happen for moronistan.

so trailer trash, is fun having you here with seriously dumb comments worthy of a stupid schmuck from say somewhere in tel aviv or haifa or hicksville moronistan. it’s all the same, moronistan close to bankrupt and the squatters about to be evicted to kingdom come.

Quite obvious that destroying the US will stop the war. How Russia plans to do it is classified and those targets mentioned above is for public consumption, the US military and government know the proposed targets but do not know if Russia is aware of any top secret establishments and control centres.. 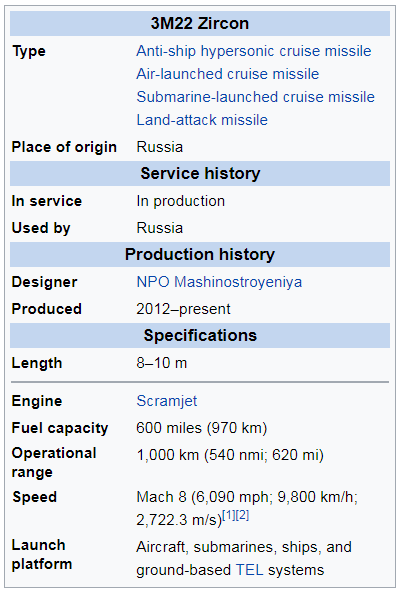 “Other surface platforms of the Russian Navy includes the Admiral Grigorovich-class frigates with possibility to carry 8 Zircon missiles while the number of missiles raises to 16 when carried by the Admiral Gorshkov-class frigates.[20][21] The missile could be used also by the planned Lider-class destroyer as well as by other current or planned military platforms including the Yasen-class, Husky-class attack submarines[20] and the Tu-160M2, Tupolev PAK DA strategic bombers.

In flight, the missile is completely covered by a plasma cloud. This cloud absorbs any radio waves and makes the missile invisible to radar (Plasma stealth).[18][21] Missiles exchange information in flight and can be controlled by commands if necessary.[22]

In November 2017, Colonel General Viktor Bondarev stated that the Zircon missile is already deployed in the Russian Armed Forces.”

Good to see Russia doing this, but they need to name cities, New York Washington etc.
It’s important that the American people understand that they will die because of the actions of their politicians.
And as Russia has already been found guilty of meddling in American elections, how about targeting cities that vote Democrat?
Put the cat amongst the pigeons. much is unknown or not publicized; US planners r fully aware that Russian and Chinese weapons cannot be intercepted nor can their locations be identified. for this reason amerika can only pretend…the more important imperialist efforts r revealed in regime change hybrid war, now most prominently observed in Venezuela

As long as Putin dont hit Oklahoma city where I live, US and Russia can have their dog fight as much as they want.
I have my cars and my house to care about, I cannot take care of all of you guys also. You must lift your arse up from your armchair and safe yourself if you wanna be saved!

Would be complicated targets for zircon. Atlantic is dominated with American submarines, not to mention all of the nato fleet. In the end of the world event like nuclear war, of course strategic sights would be hit. Sort of a pointless article.

…You did read the part about air launch?