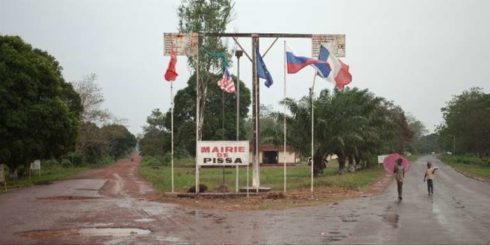 Russia has been expanding its military presence in the Central African Republic (CAR) since the Moscow-Bangui agreement was signed in 2017, according to French newspaper Le Monde.

According to the article, Russian businessmen, military personnel, mercenaries, advisers in Bangui caused multiple discussions and speculations. Furthermore, the scale of their influence raises questions.

In October 2017, there was a meeting between CAR President Faustin-Archange Touadéra and Russian Foreign Minister Sergei Lavrov in Sochi, Russia. Afterwards, Moscow obtained a requested the Security Council (UNSC) to allow deliveries of light weaponry and launching of a training program for the CAR’s armed forces. In December 2017, the UNSC approved the request.

The reached agreement includes the delivery of pistols, assault rifles and rocket-launchers as well as the training of 1,300 CAR troops.

On March 31, the first group of 200 servicemen officially completed its training and participated in a public ceremony front of the CAR president. It is the official version. However, the newspaper’s article provides more details and speculations over the situation.

Russians reportedly get access to the Berengo palace, which was a former house of Jean-Bédel Bokassa (1976-1979 Emperor of Central Africa), buried at the palace’s territory. The house was allegedly transformed into a kind of military camp. This triggered tensions between the CAR government and the uninformed family of Bokassa.

Jean Serge Bokassa, former Secretary of State for Home Affairs, slammed the government’s decision and demanded the withdrawal of the Russians from the place. The spokesperson of government responded by saying that the Berengo palace is the state’s property. Recently, Bokassa has decided to leave the government. Now, he claims that Russian presence in the country is a “key factor” of his resignation.

However, according to Le Monde’s article, Russians actively operate in the CAR using the palace as one of their HQs. In a few weeks, Russians were reportedly spotted in the administration of President, some Ministries, with the CAP soldiers and in many places across the country.

According to “local citizens” referred by Le Monde, the Russians operating in the CAR are not regular troops. The article says that excluding 5 intelligence officers, almost all the Russians worked for 2 private companies: SEVA Security Services and Lobe Ltd.

According to the article, these personnel appeared publicly for the first time on the occasion of the Touadéra’s second anniversary’s election On March 30. Alleged Russian private military contractors stole leadership from Rwandan soldiers from the UN mission, who also provide presidential security. Now, the presidential inner circle includes the Russian personnel. They have the access to his schedule.

The presidential administration confirmed the appearance of “Russian special forces unit to increase the president’s security” without providing further details. There is also a Russian adviser, the chief of security, to the president.

This “chief” coordinates security guards, according to a “local source” referred by Le Monde. The source suggested that the adviser is the “key mediator” in the Russian-CAR defense and economic contacts.

Moscow and Bangui have also signed contracts in the exploring of natural resources. The CAR is reach for its mineral deposits, such as gold, diamonds and uranium, but it has not been used because of the civil war.

“They brazenly bribe everyone”

Bangui is allegedly concerned over the possible French antagonism to the Russian activities. According to some “top European diplomat” quoted by Le Monde, “the US is concerned by Moscow’s actions in Angola and Sudan”. In return, French diplomat said:

Another diplomat, French, complained that “Russia act in a different way, it brazenly bribes everyone, who opens them the door.”

Meanwhile, the EU is developing its own training program for CAR troops. The US provided the CAR military with $ 12,7 million to buy the US equipment and communication equipment as well as a military training by US officers.

Le Monde concludes that if these initiatives aimed to limit the Russian influence, they failed.

This video was originally released by SF on January 28, 2017:

I guess the success of the Syrian operation inspired others to invite Russia in and help with any militancy threats.

The Dutch operate in Mali. The FRench are all over the place. Guess CAR wants people that actually fight.

After that, Europeans cry because of immigration while Europeans are occupying other countries. XD.

Africa is still the “Dark Continent” with many a dirty and dark deeds being commuted there by US Brits, Euros and in last 30 years the French. Opening to France of once more access to its lost colonial lands was granted BY Hillary Clinton’s and US intelligence services destruction of Libya. France reward, was Chad, cheap Libyan oil and already Lybian established pipelines running from inner Africa. Active now in 9 African, three one can justifiably say positively belong to france exclusively, and operate in nations that jointly with US contractors and active duty military total 31 African states, the central core are all that remain of independent Natoons. France is not just oil. for their main goal has always been theft of Africa’s uranium deposits that support nuke plants and weapon developements. With only miniscule natural resources, a shrinking industrial base, a way behind newest hi-tech culture and fully welfare based society, with Germany controlling Europe France chose going to war as US Dogs of War as best chance to survive in New World Order. Their press is as tightly controlled as US and Britain and China, so while they bring in humdreds of thousands of mainly illiterate and unskilled Arab and African cheap labor, their leaders gain both US bribes and stolen African resources. France now controls the richest gold fields in Africa.

The French have long thought that Africa belongs to them..

The French themselves won’t be operating in central Africa much any more as the Russians will no longer permit them to benefit from bringing in heavy military gear using the Russian Antonov An-124.

Anglo Zionist worried about their own heinous crimes in Africa. Russia could stop them and could stand with them against west.

The term Anglo-Zionist is disingenuous because no one of Anglo descent has any real power over their own countries; those few individuals of Anglo descent who wield any power in Canada, the USA, Australia, New Zealand and Britain are traitors to not only every last one of their own countrymen, but also to Western civilization and the rest of humanity combined.

This is era of Africa. Now Africa will emerge from dark.

The Russians have send a Delegation of Douma “Chemical Gas Attack Victims” to Holland….Great Move Russia!!! Go Get Them…!!! Make’m Eat Dust…these Dirty Liars are startin’ to Sweat…

France has been pillaging Africa for centuries, the last invasion of Mali, was to steal gold. France was supposed to be storing German gold, but they sold Germany’s gold. So to replace the German gold that Germany wanted back, they stole it from Mali. Napoleon stole the marble that once covered the pyramids. The French are just thieves, CAR remains in poverty, because France steals their resources.