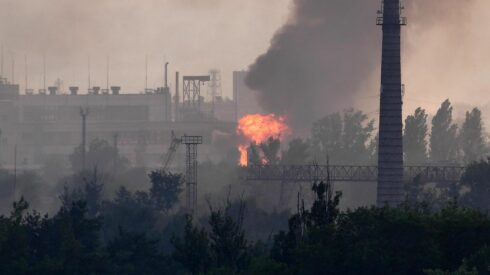 The Russian Defense Ministry announced the opening of a humanitarian corridor from the industrial zone of Severodonetsk to the city of Svatovo, which is under control of the in the Luhansk People’s Republic, on June 15. The strategy of the Ukrainian military in the city of Severodonetsk is very similar to the one used at the Azovstal plant in Mariupol.

According to the Russian Defence Ministry, the decision was made in response to the request of the Ukrainian side to organize a humanitarian corridor for the evacuation of civilians from the territory of the Azot chemical plant in Severodonetsk.

Kiev’s forces asked to secure evacuation to the city of Lisichansk, i.e. to the territory controlled by the Kiev regime. However, this is no longer possible because “on June 13, 2022, by order of the Kiev authorities, in order to prevent the retreat of territorial defense units, the last bridge across the Seversky Donets River in the direction of Lisichansk was blown up by the Armed Forces of Ukraine”.

Ukrainian militants retreating from residential districts of Severodonetsk brought hundreds of civilians to the industrial zone of the Azot plant in order to use them as human shields.

The Russian MoD noted that the Ukrainian side is not interested in allegedly saving civilians, but attempts to withdraw the units from the encirclement in Severodonetsk.

“Guided by humane principles, the Armed Forces of Russia and the formations of the Luhansk People’s Republic are ready to conduct a humanitarian operation to evacuate civilians. To do this, from 08.00 (Moscow time) to 20.00 (Moscow time) on June 15, 2022, a humanitarian corridor opens in the northern direction (to the city of Svatovo of the Luhansk People’s Republic),” Mikhail Mizintsev said.

Russia assured security guarantees for civilians with their subsequent relocation to temporary accommodation points as part of humanitarian convoys.

Ukrainian militants in the industrial zone of the city were also proposed to lay down their weapons and end their senseless resistance.

“We offer the militants of nationalist battalions and foreign mercenaries located at the Azot plant to cease any hostilities from 08:00 (Moscow time) on June 15, 2022 and release the civilians they are holding through this humanitarian corridor, as well as to stop senseless resistance and lay down their arms,” Mizintsev said.

The Russian side guaranteed the preservation of the lives of those fighters who surrendered, as well as compliance with all the norms of the Geneva Convention on the Treatment of Prisoners of War, as it was the case of Ukrainian militants who had previously surrendered in Mariupol as well as on other Donbass front lines.

It was noted that the readiness of the Ukrainian side to launch a humanitarian operation should be accompanied by the raising of white flags. The Ukrainian side has been informed on the Russian decision through the Deputy Prime Minister of the Government of Ukraine Irina Vereshchuk.

I hope no Azovs leave pretending to be civilians ?

Work AT Home
Reply to  Donnchadh

Last edited 2 months ago by Work AT Home
-11
Reply

They are all checked out.

Cash making job for evey american to earn and work online. earns more than $15k every month with this home based job.bvg i made $18521 from this job in my spare time afte my college. easy to do job and its regular income are awesome. no skills needed to do this job all you need to know is how to copy and paste stuff online. Open This Website >>>>>>>>>> 𝑪𝐚𝐬𝐡𝑩𝐨𝐱𝟏.𝐭𝐤

Russian forces about to encircle the AFU and Nazi elements as the fronts of the LPR,Vrubovka under Russian troops The capture of Vrubovka means the operational encirclement of the UA grouping in Zolote and Gorsky.

Work AT Home
Reply to  James

Last edited 2 months ago by Work AT Home
-1
Reply

Another evacuation to gulags?

what?..gulag?.. nooo… this is CRYOGENIC REEDUCATION ..

Yeah me too !!! You remind me of a muslim cocksucker like you ! Say that you like Biden’s farts ? Mmmmmm ! Anyway, your cock is brown and will remain very brown !

Yeah, just another jewish trash impersonating as a muslim.

He exposed himself the other day on another article, he got triggered like a little twink when someone called him out as a scumbag khazar jew.

He’s not the first one to do that, usually when you see someone with such religious name and acting like a small man syndrome limp dick, very good chances that’s a zionist tumor.

Augsta
Reply to  Muhammad your Prophet

Change your name you are disgusting

Muhammad your Prophet
Reply to  Augsta

I am your prophet, asshole. Show some respect.

The only prophecy, you have to offer, is that you’re a false prophet. The rest of you is not fit for a normal conversation. Give yourself up, you’re not even a good troll.

Bozo the clown is crying now. The crying clown.

CallagherM14
Reply to  Muhammad your Prophet

OMG!!! Another muslim looser … “beautiful name “ … I think am gonna throw up! You are discusting … anyway, momo was anything else but not a nice person … not even close to a prophet! … and, it was midget fat guy … or gay … it really doesn’t matter

Ps … I apologize, momo wasn’t gay, there are no records of such thing …but, because there is a but, there are records of this scum being a war lord, pedofile, caravan rober, mass murderer, slave owner, christian hater/killer, womanizer, inclined to suicide, iliterate, back staber, liar/deceiver, you name it!! … the only “miracle” he did was him talking with the lamb leg he was poisoned with by eating it (cooked by a jewish woman who’s family was killed or raped and then killed (depends on sex) by the monster … however , the lamb leg never responded back to momo …for obvious reason!

Muhammad your Prophet
Reply to  Porc halal vs flying donkeys

Muhammad, the fake prophet.. Some more drivel, coming out from Tel Aviv?

Bozo the Clown
Reply to  Porc halal vs flying donkeys

Hey, what is the weather today, in Tel Aviv? Lounging by the pool, typing idiocies?

What a very vivid memory you have. It’s a shame it’s warped and feckless. Bucha has already been debunked by the Ukrainian forces own laughable attempt to stage it.

It’s been debunked inside the deranged delusional imagination of the Putin cockroaches. To the rest of the world they are the same filthy rapists they always were.

I’m ready to put money, on that: Meaning that only one is the deranged one in this discussion. Shoo away, false prophet and comment on CNN where the level of intelligence is closer to yours.

What? In shitty roubles? That’s your money? Your money’s worthless. Fucking loser.

CallagherM14
Reply to  Muhammad your Prophet

The Wagner PMC base in Kadiivka was destroyed thanks to a video from TikTok, according to CIT investigators.

According to investigator Kirill Mikhailov, the russian command is trying to hide the fact of the death of russian mercenaries at the base in Kadiivka. At least 40 wagnerians and russian soldiers were killed there

How much you get paid for spreading your stupidity, Muhammad, no use to hide, everyone here know you’re just a stupid troll.

Bozo the crying clown is willing to throw his shitty roubles into the pot to prove that he’s not a crying loser.

Does Russia guarantee “the preservation of the lives” of the foreign mercenaries if the surrender? Not good. I want to see them die.

Bozo the Clown
Reply to  Chad

Foreign mercenary are paid assassins and should be treated as such.

You should be treated as as deranged lunatic. Go rape your dog or something.

Not Relevant
Reply to  Chad

They are treated as criminals.

Russia along with her Allies has proved herself over and over again during this conflict to be humane and guided always by the rule of law. Russia and LDPR military units have withdrawn or suspended actions in areas where Kiev regime forces used Civilians as human shields .In order to minimise Civilian causally and unnecessary damage to property and infrastructure. The Russian military have and Continues to act at all times in a professional and Skilled manner in the most difficult circumstances where Kiev regime policy is to used the civilian population as shields And target their own citizens when they attempt to leave a Conflict zone. The humanitarian Corridor presents an opportunity for the safe evacuation of Civilians and injured persons to leave severodonetsk to a place of Safety! There is also the opportunity for Kiev regime forces to consider their own positions and look for a realistic settlement that will allow them at some point in the future to return home to their families. God Bless Russia and the LDPR …..

I guess there is nothing left to do but to ‘evacuate’ the Ukrainian soldiers……to Russia, where a fair trial awaits. That’s better than a bullet in the back, from a nato robot.

exactly, I presumed either they were just dumb ukrops and could not read more than 4 letters of their own language none of them know…or perhaps its because none of the foreign mercs can speakie language and keep thinking its the Azov whackjob’s muster point for tea and crumpets.

So, comrades nazis, we could have another 3 months of Mariupol like siege. Let’s not do that again, ok? We’ll make a corridor, we are that desperate to take the town…

So the Ukrop scum have attacked the exit corridor with mortars. FFS, gloves off Putin, just bomb the plant in to rubble, now! Bollocks to the civilians, some payback for the DPR civilian shelling by the Nazi scumbags!

And the ukrop’s would not let anyone leave, did not even tell them it was on. one 79 yr old male made it away from the area. Ukrop’s inside opened up with a tank, a mortar and artillery. same old, same old