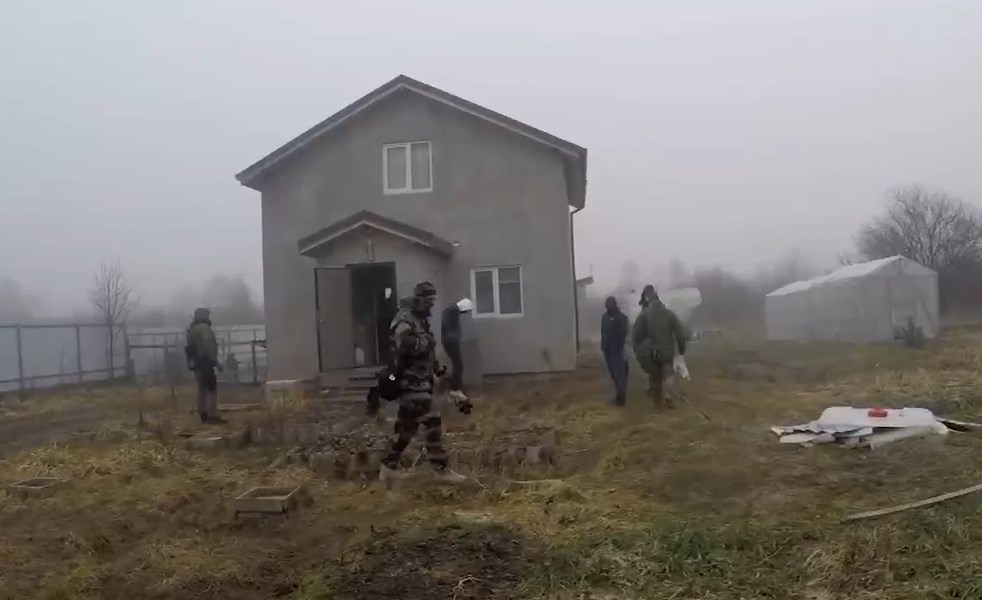 On March 4, the Russian Federal Security Service (FSB) published a video of the arrest of a person that was preparing a terrorist attack on an energy infrastructure object in the Kaliningrad region.

The criminal motivated by a hate towards the current government planned a terrorist attack at an energy facility and recruited other residents of the region.

During the search, security forces found IEDs, components for making explosives, as well as “materials with offensive content against the Russian executive and legislative bodies.”

Some fertilizers for vegetables 0:33.

What happened right after Russia retook Crimea? The Russian FSB searched all the Turks living there… Why? Because NATO sponsors Islamist terrorism when it suits them to.

Just like they sponsor “right wing Nationalists”, ie, useful idiots, when it suits them.

as well as left wing fanatics, basically they sponsor any radicals that suit their agenda.

Standard materials that can be bought in any shop without rising suspicion are used here. These terrorist actions converge with Ukrainian escalation in Donbass.

Russia already knows for Ukrainian arriving spring offensive against Donbass…. It seams that Ukraine is trying hard to escalate conflict between them and Russia to the max…with Biden’s blessing..

hopefully they end on borders of EU…

its starting to clear up…..Biddy wants to tangle with Russia using Ukraine….and does he think Americans will die for him in hopes of what…conquering Russia or having John Bolton drive a tank into red square, maybe killing millions Russians like they did the Germans and finish off western civilization once and for all….thank you for saying what can’t be said in the USA

Nobody will “kill millions Russians” ever again. If NATO attacks Russia, than Russia will nuke sh*t out of them with tactical nukes. It will switch on ICBM-SLBM nukes and MAD very quickly….. we all will be dead

i know it, and you know it, but NATO can’t afford to know it. its mired in the past its as if WW2 never took place. the bright spot Germany will not go along with this war

NATO talks and rambles about wars, Russia talks little about it but is really preparing to fight the war, Westerners have been going to war against Russia for centuries and always end up with broken bones, but this is the first time in history that Russia many times stronger and more prepared than its aggressors, perhaps in Brussels they do not know it but at the Pentagram some general knows it all too well.

Someone is clearly growing more desperate by the day now.

Russia returns to the idea of ​​developing a fighter with vertical takeoff and landing The Ministry of Defense of the Russian Federation confirmed that today [September 12 – ed.] they returned to the idea of ​​developing the latest fighter with vertical takeoff and landing, as well as the development of such a fighter is already included in the new State Armaments Program, The platform for the new fighter will be the development of the Yakovlev Design Bureau, from the time of the collapse of the Soviet Union, the Yak-141 carrier-based fighter. https://cdn.jetphotos.com/full/1/50907_1359856198.jpg https://bulgarianmilitary.com/2020/09/12/russia-returns-to-the-idea-of-developing-a-fighter-with-vertical-takeoff-and-landing/ Yak-201 YAK-201, with the factory designation “product 201” (Izdeliye 201), was a proposed development of the Yak-41M ‘Freehand’ equipped with Kuznetsov NK-321 engines. The Yakovlev aircraft design bureau developed the first domestic vertical takeoff and landing aircraft in the USSR and Russia. The successful Yak-38 for many years stood in the arsenal of naval aviation units of the Air Force Navy. Its less fortunate counterparts, Yak-141 and Yak-43, caused Yakovlev’s OKB to continue work in this direction. But if all the previous models got a real embodiment in the metal, then the next sample of the Yak-201 plane existed only in drawings. https://www.globalsecurity.org/military/world/russia/images/yak-201-image01.jpg https://www.globalsecurity.org/military/world/russia/images/yak-201-image03.jpg https://www.globalsecurity.org/military/world/russia/images/yak-201-image02.jpg https://www.globalsecurity.org/military/world/russia/yak-201.htm

Thats the way they like it,same in my country,control the narrative.

Whether or not Russia establishes new rare earth metals mining operations, I’m surprised that Russia and China aren’t hoarding yellowcake (uranium). This is the end-stage energy source for civilization.