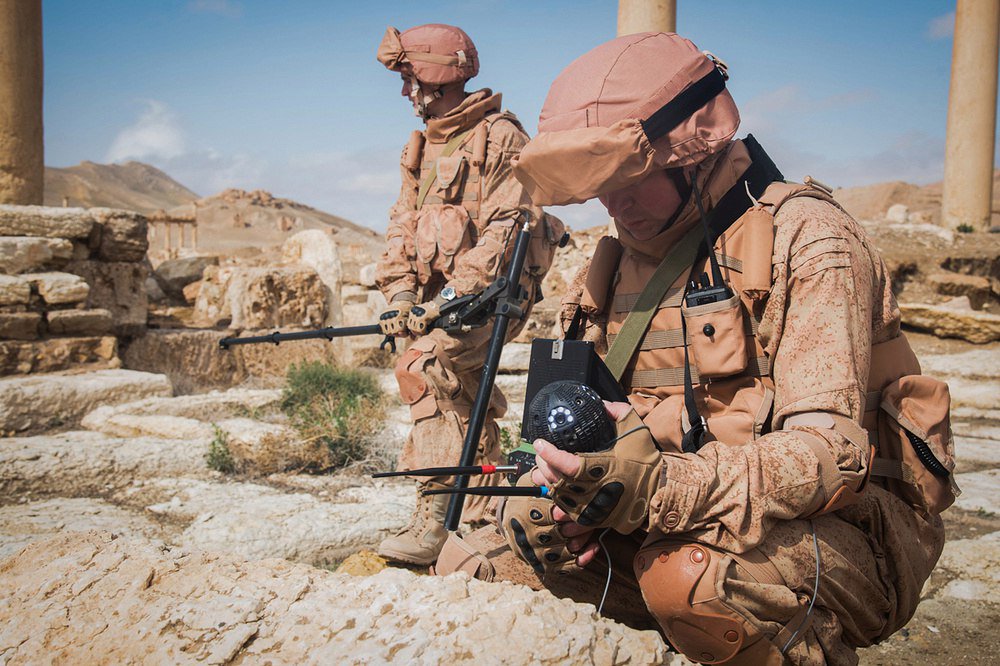 Units of the International Mine Action Centre of the Russian Armed Forces have demined more than 6500 hectares in Syria including 17,000 buildings and neutralized 105,000 explosive devices, Russian Defense Minister Sergei Shoigu said on July 24.

The analysis below was originally released by SF on February 27, 2016:

Nice work to both Russian and Syrian sappers.

US and their funded terrorists Israel and ISIS had thought that they have won the war against Assad and today or tomorrow Assad will be not in power but their all these hypothesis just remain dreams.

Now Assad is more popular than before and Syrian army got great weapons and great war experience.

That’s the makings of a sweet load of barrel bombs!

Say a prayer for the ones they didn’t mention in the print.

US, UK have made a fake state of Israel the place of head choppers in Palestine. Many countries have kicked out Jews from their countries so they have migrated to Palestine for shelter.

Excellent work and Congratulations are due to them from all. The fact they are training Syrians and ensuring they have the skills required to enable them to continue demining long into the future is worthy of particular gratitude. This is complex and highly dangerous work necessitated by the barbarism of those engaged in unleashing terrible warfare upon the Syrian People …….. so it was and is in Syria and so it may yet prove to be the case in iran and on its borders. The world must ensure that the sabre rattlers in America, Israel, Saudi Arabia and UAE are kept in their barracks at all costs: the consequences of unleashing war on Iran and on the Iran People are simply too terrible to contemplate.

hey its good to be back!! I just passed another test today and got my second IT certification! It was the hardest yet, i didnt think i would, but thank God i did :)) Ive been studying nonstop recently and decided to take a break from it all and check out what’s going on around here. Very glad to see SAA mopping up the daraa area quickly, but angry about israhell downing the syrian plane today. They need to pay for the mayhem theyve helped create in syria and elsewhere. Just have one more test to go. And thank you, my situation has improved. I still think about her and hope and pray everyday that someday we meet or talk again, but I feel like im definitely past the hardest part, or at least I think so. I realized it may have happened for a good reason. When i was still talking to her all I cared about was having her love and affection, and as long as she kept giving, I was happy, it was like a drug almost. It was like she was my world. So maybe God decided its time for me study and take my tests before its too late. I just hope she will return someday, because we were getting along great before she met this other guy. A similar but actually worse thing happened to a friend of mine that i hadnt talked to in almost a year, and im glad I got back in touch with her again, something was telling me to ask her how shes doing, she wants to meet up with me sometime soon she said :) I hope all is well with you :))

I am also glad to see you again on these pages.

Russians are the best – always helping people in trouble.

Current Russian doctrine realises that to win the peace anywhere ,the civilian infrastructure must be restored quickly and cleared of munitions etc. Winning the Hearts and Minds of a nation is paramount.

US doctrine is to totally destroy civilian infrastructure a then to ‘eat the heart’ of the nation by plunder.