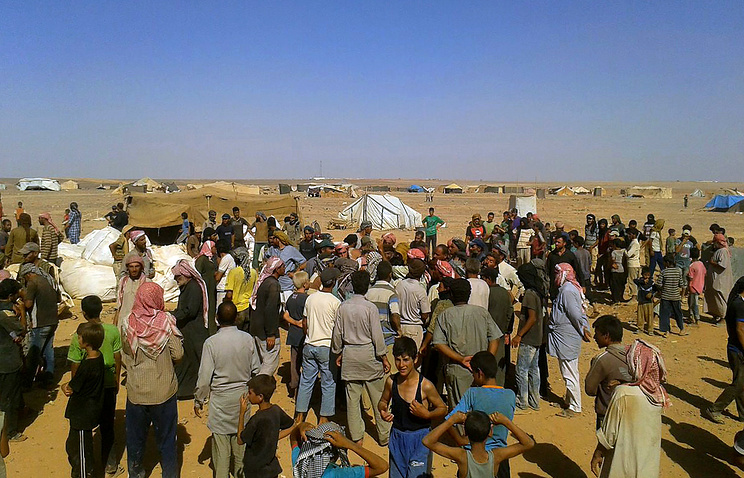 For the second time this month, U.S. forces in the al-Tanaf base in southeastern Syria prevented buses sent by the Damascus government from evacuating thousands of refugees from the al-Rukban camp.

“Despite the measures taken, the evacuation of refugees from the Rukban camp is actually blocked because of the American side, which does not allow buses to evacuate refugees and refuses to ensure the safe movement of humanitarian convoys inside the 55-kilometer zone around its base in al-Tanaf,” the Russian Center for the Reconciliation of Opposing Sides in Syria said in an official statement on March 9.

The Russian center said that the Damascus government had taken all the necessary measures to ensure safe evacuation of the refugees through a secured route, which had been established earlier. However, the U.S. continued to block the route.

More than 45,000 displaced civilians are trapped in the al-Rukban camp. These civilians suffer from the shortage in water, food and the lack of proper medical care. A recent survey, which was conducted in cooperation with the the Red Crescent, showed that most of the civilians want to leave the camp.

Last week, the Damascus government sent a convoy to evacuate these civilians in cooperation with Russian Forces. However, U.S. forces prevented the convoy from entering the 55km de-escalation zone around the camp. A spokesman for the U.S. Department of State claimed that the Russian-sponsored initiatives to evacuated the civilians trapped in the camp does not meet “protection standards.”

Local observers believe that the U.S. wants to use these refugees as a tool to pressure the Damascus government and justify own illegal military presence in al-Tanaf.

Use large troop carrying helicopters to at least give the finger to the Yanks…Good PR stunt at the very least,and saving some severely sick refugees as the best case scenario.

Russia should go to the UN and publicly condemn the US for holding hostages and using them as human shields. Claim the Americans are effectively taking slaves, and watch black Americans stone Trump.

Russia already did it but UN (dominated by US and their vassal whore states) is ignoring it.

“…A recent survey, that was conducted in cooperation with the the Red Crescent, showed that most of the civilians want to leave the camp…”

So what? It’s not a collective decision – a refugee camp is not a democracy. As long as A SINGLE CENTCOM death camp detainee wants to leave to wherever the buses are going to take them, then who is the US to decide otherwise? That ONE detainee has the right to choose to leave for wherever they want, period. Syria and the Red Crescent have every right to send a bus in for that person. Refugees did not transfer all their rights to the FSA death camp local committee/mafia OR to CENTCOM land/resource theives.

Seriously, what the fuck is wrong with the US military? Is there any specific CENTCOM or Pentagon commander that has the balls to take responsibility for this bullshit? Or are you cowardly fucks still going to hide behind a foreign agent (CJTF-OIR) you’ve sworn alligance to and give vague justifications based on that fake authority? I don’t pay you bitches to avoid the provisions of the US Constitution by using the ‘coalition’ loophole. If you don’t take full responsibility for what’s happening in Syria, then get the fuck out of the US military.

“Seriously, what the fuck is wrong with the US military?”(c) Nothing wrong – just keeping up their “heroic” tradtitions sinse My Lai massacre.

Out of respect for the victims, Tudor, I have to point out that THEY had called their home village Song My for their entire lives. A US Army map had it labled ‘My Lai’ for some reason – there was no Vietnamese village with that name.

And the referred to ‘heroic tradition’ of genocide was practiced fully, long before any Euro-trash stepped foot in Vietnam or the Americas.

Let the Red Crescent take over the evacuation then

Who is the US commander at At-Tanf who has control over this Death Camp?

Ridiculous loss of beautiful internationalist and propaganda opportunity. What the hell is wrong with Syrian intelligence and foreign affairs services. Haven’t they learnt anything from Palestine! This sort of stuff should be all over social media.. but they appear to have no one working on it. owot?

Russian military convoy with observer and air force must enter this USA hell forcefully to rescue this civilians.USA is not above international laws it can not take international in it’s own hand.USA self made law can not hijack international laws.Just the fact that their want to implement own NATO bias laws their attack sovereign countries and make own law.USA is Judas iskariot if their failed to make own laws their run to their own UNSC council and win with majority vote to cause chaose for human suffering.