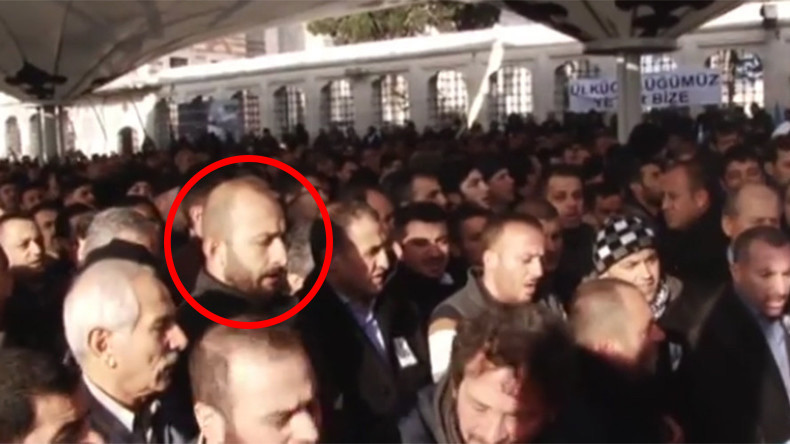 On Wednesday, the Turkish ultranationalist who showed off killing the pilot of a Russian bomber shot down by Turkish fighter jets was seen at the funeral of a fellow militant in Istanbul.

His named is Alparslan Celik who is a Turkish citizen and the son of a former district mayor elected from Turkey’s Nationalist Movement Party (MHP). He is also a member of the party’s unofficial youth military arm, Bozkurtlar.

According to Hurriyet newspaper, Alparslan Celik, who is considered a war criminal by Russia, appeared in Istanbul on Wednesday for the funeral of the head of the MHP bureau who was killed in an airstrike in a Turkmen village in Syria in Istanbul’s Fatih district.

Celik claimed on camera that his group killed the pilot of a Russian Su-24 bomber after the warplane was shot down by Turkish fighter jets on November 24. He also confessed that the Russian officer, later identified as Lieutenant Colonel Oleg Peshkov, was killed as he was parachuting down to the ground.

“That pilot bombed us five minutes [before Turkey downed the Russian jet] and our brothers were killed or wounded by these bombs. There is no place for a person who has bombed civilian Turkmens every day in my conscience,” Celik told in an earlier interview in local Turkish media.

Previously, Russia demanded Turkey to arrest Celik and try him for the killing of the Russian pilot, as well as for being a member of an unlawful armed group but Ankara ignored the demand and he has continued to give interviews and travel freely in Turkey and across the border into Syria.

The Russian warplane shot down caused a major shift in Russian-Turkish relations while Turkey claimed that it had acted properly in defense of its airspace after an alleged seconds-long violation by the Russian aircraft.

However, Russia denied that any breach occurred and has accused the Turkish government of supporting terrorist forces in Syria. Russia also accused that senior Turkish officials profited from smuggled oil and were trying to protect their illegal business. Later Greek and Israeli officials, among others supported Russian accusation.

I would imagine his days on this earth are numbered, if the Russians have anything to say about it.

I agree. He will be meeting his maker soon.

The boys from Spetsnaz will be making a call on him.

I would sacrifice one Kalibr ….. USA likes to bomb funerals and weddings as well.