The Russian Ministry of Defense (MoD) has confirmed the deployment of peacekeepers in a number of towns in southern Karabakh which were recently attacked by Azerbaijani troops.

On December 13, the Russian MoD released a map of the disputed region of Karabakh showing the towns, which are located in the vicinity of Hadrut, within the area guarded by peacekeepers. In previous maps, the towns were shown in the Azerbaijani-held part. 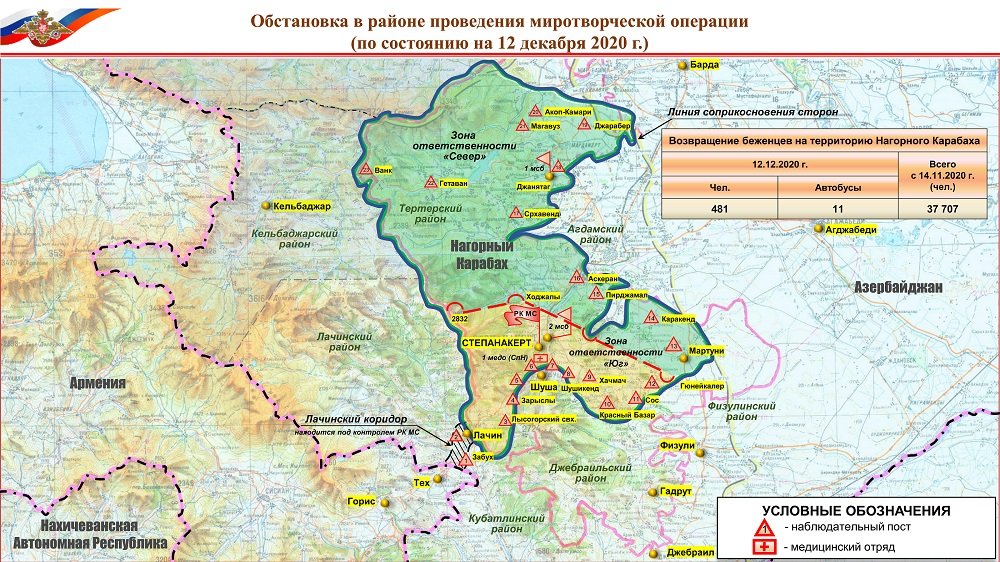 Locations of Russian peacekeepers’ posts is marked with red triangles. Released on December 12. 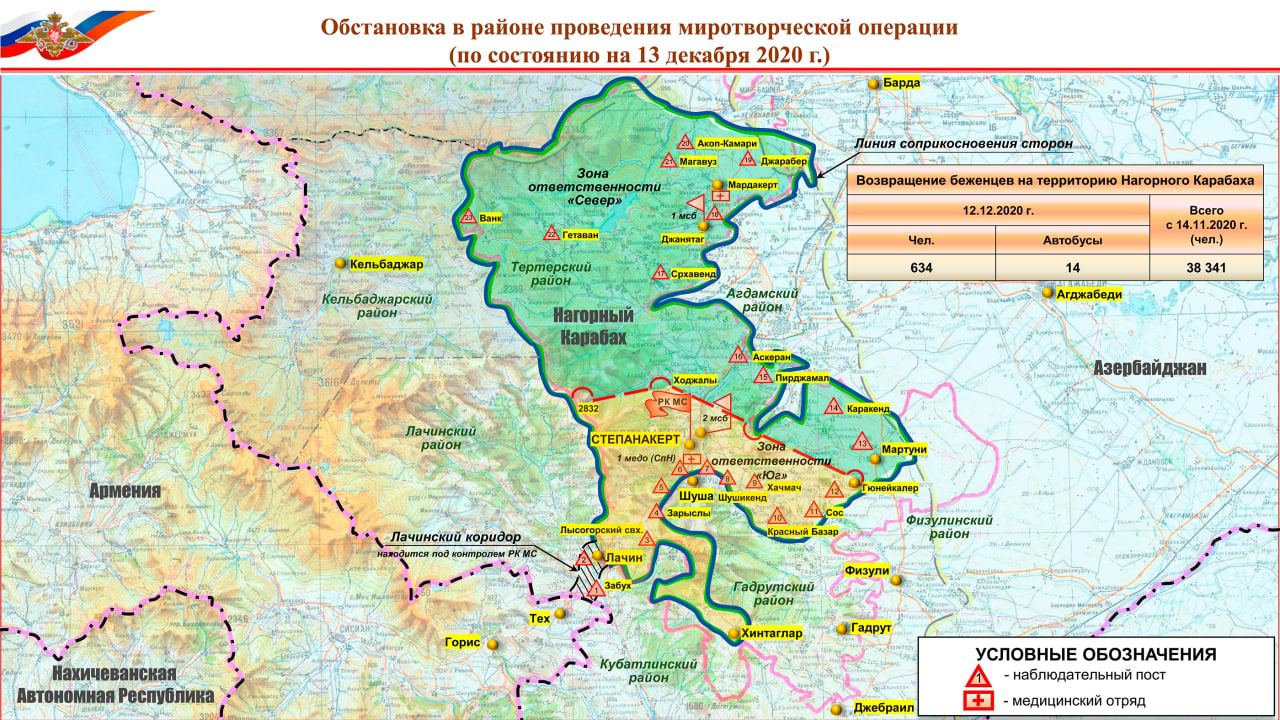 Locations of Russian peacekeepers’ posts is marked with red triangles. Released on December 13.

Azerbaijan launched what it called a “forced anti-terrorist operation” in the towns, Khin Taher, Hin Shen and Mets Shen, on December 12. Baku claimed that Armenian forces should withdraw from the towns according to the November 9 peace deal which was brokered by Russia.

However, Armenian forces held onto their positions in the towns. Russian peacekeepers called the Azerbaijani attack a “violation” of the ceasefire in Karabakh.

Armenian Defense Minister Vagharshak Harutiunyan, who is paying a working visit to Russia, discussed the ceasefire violation in Karabakh with his Russian counterpart Sergei Shoigu on December 13.

The situation in Karabakh is now once again stable. The Russian MoD said the ceasefire regime is being held along the entire contact line.

The violation, which was the first of its kind, didn’t affect the implementation of the Russian-brokered peace deal that appears to be holding up very-well. Such incidents are deemed to happen in any conflict zone.

Armenia should first kick out the Russians as quickly as possible if they want to repel the Azerbaijani aggression. Expecting Russian military help is the biggest foolishness of the millennium. If the Russians stay Armenia will keep losing territory.

And without Russian forces…Armenia lose Yerevan…

He who laughs last laughs best
Reply to  Indian1

Remember: if Stepanakert is under Arthsak control is only thanks to Russia. Armenians don’t probably like Russia, They already tried for two years to get rid of it. As a result they lost more than half of Nagorno-Karabakh, because they do not have any ally but Russia. Nobody helped them, not even the Armenian government.

Hi Shlomo… How is the weather in Tel Aviv hasbarat…,?

But he has a point,. Russia’s vacillating policies are alienating all its once friends. Russians hold joint exercises with terror sponsors like Turkey and Pakistan. India has lodged an official protest.

Its called diplomacy. Russia has friends and allies the U.S. vassals and colonies.

begone lumpchin,got nothing going your way (period) iq of your shoesize dumb as fk!

Russia has proved very untrustworthy, it is conducting joint military exercises with terrorist sponsors like Pakistan too, despite the fact that Pakistanis in the service of their US and Wahhabi masters killed thousands of Russians in Afghanistan.

And India is “trust” worthy, while receiving Western delegation in leased Russian nuke sub, or while smiling at Russia and being in bed with US ever more? Sovereign countries can choose friends (India choose US to by weapons from, Russia choose Pakistan to sell them weapons – end of story) So why are you complaining and badmouthing Russia in such dishonest way? India was obviously sitting on 2 chairs from the start despite bad experience with US sanctions in the past. Now you are every day more on US side so what obligation Russia has towards India?!? NONE ! Problematic joint military exercise was agreed before conflict of India and Pakistan. You certainly can’t label Russia as “supporter of terrorists”. And if Russia can find good customer in Pakistan for their weapons why not?! What effing right do you have to decide for Russia or to lecture Russia?!

Russians are the most cowardly people in the world. They ally with all terrorists and all their enemies for fear of fighting a war.

“Russian peacekeepers called the Azerbaijani attack a “violation” of the ceasefire in Karabakh.” In other words Azeri’s should go back to the starting point, where they came from and shut the f*ck up. Something tells me that Azerbaijani Aliyev will not make any protest on Russian declaration.

No,they sent peace keepers to help evacuate the soros/armenians whom fired the first shots Either way,wrong or reight,anyone mess with the former CCCP= out of the fkn way fascist:

I have copy pasted sentence from article…So if they lie I lie too. There is big difference from firing few “first” shots on one hand and invading several villages on the other. Firing few shots (even if “first” ) are negligible violation, while starting full war operation – attack is clear violation of agreement.

How is that related to this conflict?

Thankfully nothing escalated in the end, and Russia was able to properly respond. I want to see this 32-year-old war come to an end, which is 2 years older than myself.

I had the impression that Armenia tried to escalate the conflict by not withdrawing (being a sore loser/Western-backed), and that Azerbaijan (being over-ambitious/Erdogan-backed) would capitalize on this by being strategically stupid and escalating after their “victory”. Two bad players trying to one-up each other, playing loose with the law.

These terrorists were independent, not under Armenian control.

Most excellent ? CIAisis is crying and raging.

The Karabakh issue is far from settled, the Armenian FM is visiting Russia, India and various other powers and Armenia is rearming and may launch a surprise attack to regain the lost territory. Azerbaijan is losing soldiers every day now.

Now totally isolated and cut in half without the land connection between Artsakh and Iran, and the Russian-sanctioned Azeri occupation of Zangezur, Armenia is no longer a viable sovereign nation.

Armenia will be depopulated, probably sold to the Turks in its entirety, and thus cease to exist by the turn of the century.

Thanks Putin the Jew.

No you degenerate insolent lieing piece of sht,the germanic khazar incest breed enticed turkey to hit on armenians and no there were not 1.5 million killed like youir historian lieinmg sprogbrethed degenris kweers sprouted on about infact 1/10th if that to be real,like the soviets most relkocated fkn derr sprogbreaths,official report from recent release us history shows 7 million soviets lost their lifes not more than you wishfull neo0liberal liars rant on about just because germany lost 8 million being one million more than soviets,dumb kuntz!

Indeed, Putin has led Armenia, a loyal ally down by mollycoddling the neo-Ottoman delusional Erdogan and his Wahhabi terrorists.

He who laughs last laughs best
Reply to  Ashok Varma

Loyal ally? Pashinyan spent 2 years trying to get rid of Russia and trying to ally with Nato and EU, which are (despite tensions) allied with Turkey…. Wonder why they lost. Putin might not have done everything he could to help the Armenian people and the Republic of Arthsak, but he still did more than the Armenian Govenment which never even sent regular troops in Arthsak.

thats what happens when you sell your country. your owner can do whatever she wants with you

Sadly its true. The mistake of the previous administrations was selling all of the strategic industries like airlines, railway, energy to a foreign country. Just to stay in power.

not much of a choice tho. having a country blockaded from 70% of borders is not very helpful for self-sufficient economy. they shouldn’t have started a war back in 90s in a first place. they got themselves into this mess

Message is clear,law of the land,mess with the C.I.S your out,over and done with,bre gratefull your lifes been spared this time,no brainer the west will try anything to control,what ain’t theirs.

The Turks and Azeris need Nakhichivan connected to Azerbaijan without intervening Armenian territory. This isn’t over.

He who laughs last laughs best
Reply to  Jon

I doubt that Russia will allow that. When Russia proposes you a peace agreement, you have to accept it and follow it. If you either reject it or you accept it but you violate it, Russia will force you to sign a worse deal.

Russia did that with Georgia (Invasion of South Ossetia and Abkhazia), Turkey (Idlib), and now with Armenia (they refused to accept a peace deal in November, while Azerbaijan was ready to accept it).

So Azerbaijan and Tukey should contain their imperialistic impulses.

Arman Melkonyan
Reply to  He who laughs last laughs best

Russia gave Idlib and Afrin to the Turks.

He who laughs last laughs best
Reply to  Arman Melkonyan

Yes, they made a peace deal that allowed Turkey to have an indirect control over Idlib, but only according to some conditions, such as to form a 20 km demilitarized zone, the opening of the M4 and ther M5 for civilian…..

Turkey did nothing at all, and Russia was not pleased with that: They allowed (and helped) the SAA to capture first Northen Hama and then the M5 Highway months later.

They signed a peace deal that still allows the Turks to have control over Idlib, but on a way smaller area,plus a lot of other stuff. As a said a way worse deal. And Turkey is not honoring the peace agreement again. So we can guess what will happen.

Arman Melkonyan
Reply to  He who laughs last laughs best

Turkey has been in control in Idlib for 2-3 years by now? I don’t subscribe to the pro-Syrian and anti-Turkish picture you’re painting of the Russian stance. Putin and his Russians are clearly succoring the Jihadis and their Islamist Turkish partners. Russians are clearly lying about their true position regarding the Jihadis. Russians, along with their Israeli and Turkish partners, are helping the Muslim terrorists in Idlib.