On November 10th, Russian peacekeepers and military equipment continued being deployed to Nagorno-Karabakh to preserve the situation between Armenia and Azerbaijan.

A Russian force of 1,960 military personnel and 90 armored personnel carriers is currently in the process of deploying to the region as peacekeepers, for a renewable five-year mission.

An interesting Kamaz vehicle was seen, which appears to be heavily modified. It is unclear what it would be used for, but it is presumably to be part of the monitoring mission somehow. The peacekeeping brigade that arrived in Armenia from the Russian Federation, whose personnel unloaded and formed columns for the march, is moving to the concentration area, the Russian Defense Ministry told Interfax.

“A subdivision of the peacekeeping formation, which flew from the Ulyanovsk-Vostochny airfield to the Republic of Armenia, is marching to the area where the tasks of controlling the ceasefire and hostilities in the zone of the Nagorno-Karabakh conflict are carried out,” the Russian military department said.

The march takes place as part of regular units. “The military columns will have to travel more than 250 km and deploy a peacekeeping contingent with the deployment of Russian observation posts along the contact line in Nagorno-Karabakh and along the Lachin corridor,” the Russian Defense Ministry told the agency.

Earlier it was reported that 20 Il-76 military transport aircraft with officers of the command of the Russian peacekeeping forces and servicemen of units of the 15th peacekeeping brigade had already landed in the Republic of Armenia. They delivered more than 400 servicemen, materiel, armored personnel carriers, automotive and special equipment, communications.

Azerbaijani President Ilham Aliyev said Turkey would also be involved in peacekeeping efforts but there was no mention of it in the agreement.

Turkish President Recep Tayyip Erdogan said Ankara and Moscow would jointly supervise the ceasefire at a “joint center to be designated by Azerbaijan in its lands saved from Armenia’s occupation.”

He hailed the truce as a “right step in the direction of a lasting solution.”

In Armenia, the news of the peace deal that’s essentially giving up territory due to mismanagement of forces by the leadership of the country and who specifically is responsible is becoming more and more apparent.

Unknown individuals broke into and destroyed the office of the Soros Foundation in Yerevan, there is also a video:

Separately, the office of the Armenian service of Radio Liberty and journalists were attacked in Yerevan, Interfax reports with reference to the Union of Journalists of Armenia.

“Today, the Yerevan office of Radio Liberty was attacked by unknown persons. The attackers tried to damage the equipment. According to preliminary data, journalists of the radio station were also attacked,” the Amenia Journalists’ Union said.

The most pro-Western establishments, currently, appear to be taking the brunt of the discontent at the loss of the war, and it is understandable, since Prime Minister Nikol Pashinyan seems to have disappeared and he is a staunch supporter and follower of the Western liberal agenda.

All the instigators of the pogroms in Yerevan will be severely punished, the Armenian prime minister said, but that is unlikely to lead to anything until anger subsides.

In a sort of “too little, too late” situation, the French Foreign Minister issued a statement regarding the peace deal in Nagorno-Karabakh.

“Announcements were made last night by Armenia, Azerbaijan and the Russian authorities regarding the implementation of a ceasefire agreement in Nagorno-Karabakh. We have taken note of the agreement and are examining its terms and implications. Clarifications are expected in order to assess their impact.

The cessation of fighting is crucial. The parties had made this commitment several times over the last few weeks and we have been, and remain, strongly committed to this priority within the framework of the co-chairmanship of the Minsk Group. We therefore expect Azerbaijan to strictly uphold the commitments that it has made and to put an immediate end to its offensive. In this context, we call on Turkey not to do anything that goes against this key priority.

At this difficult time, France reaffirms its wholehearted friendship with the Armenian people in light of our close human, cultural and historic ties with Armenia. In these tragic circumstances, we stand alongside it. In particular, we will work to lend it all the humanitarian support it needs. Indeed, the situation on the ground, with displaced populations and fighting in urban centers, has resulted in serious humanitarian consequences.

France has mobilized its efforts in recent weeks through a very large number of civil society initiatives. The French authorities are contributing to these initiatives, providing medical assistance, which arrived late last week in Yerevan and included teams of surgeons specialized in treating conflict victims. Other initiatives will be taken in the coming days to provide Armenia with the help it will need.

Finally, the resumption of negotiations between the parties on a lasting settlement of the conflict remains necessary, beyond the ceasefire announced yesterday. As co-chair of the OSCE Minsk Group, France will be an active participant in this effort. Discussions between the two parties must resume without delay. They must allow for the return of people displaced by the conflict in recent weeks, and for the definition of the future status of Nagorno-Karabakh.”

It is clear that the situation was massively mismanaged by Armenia, with a general chaos in controlling its forces and its defensive, line as well with its policy.

It refused to recognize the Artsakh republic, hoped for some other country to do it, and for a while there was hope that France would take some steps towards that.

However, they didn’t foresee the string of violent crime in France, which led to French President Emmanuel Macron’s statement that angered Muslims around the world.

As a result, empty rhetoric and an “expression of friendship” was all Yerevan and Pashinyan got in the form of “help”. Since it is clear that France likely does not wish to antagonize Turkey, Azerbaijan or any other Muslim country any further, as of the moment.

And the statement in the sort of “pray for Armenia” is all that Pashinyan and Co. got from their allies, while Russia still came and salvaged the fiasco.

This is a funny article. Isn’t “hero” the same guy who got this mess started in the first place? Its like mafia in 50s that come into your shop, destroy everything there, then next morning accepts shop owners money and offer “protection” in exchange:)))
Its not Pashinyan’s fault to go into different direction, its the fault of Armenians themselves that they woke up only 2 years ago. They should have done it long back. And seems like both who want to remain awake and those who want to fall back to sleep again are actively trying to get into power.
But the deed is done, and will not be reversed. So I doubt the “Hero” has anything to offer to Armenians, maybe same kind of protection?:))). Hence the smart part of Armenian population will understand who will be more beneficial to cooperate with in future.

Oh my bad. Whatever Russia does is the true reflection of holy and blessed justice and fairness:))))

“the state always reflects the values and desires of its people”. Durkheim
“the people always get the govt they deserve”. de Maistre

Russia can keep the peace here on in,no need for lgbtq france to try to mess things up with their savvy teorroists n sht!

You just dont much about that too.

“Salvage the fiasco” ? isn’t it still a fiasco ?
I wouldn’t like to be a Russian peacekeeper here in Nagorno-Karabakh, who could they really trust, the local Armenians, the Azerbaijanis, the Turks, mmmm, maybe no one at all would be the best option.
I don’t think this is the end to it all, I suspect Erdogan will do what he always does, move the goalposts midway through the game and force extra time.

I don’t know of a single country french leaders/ops intervened without fking everything,

this includes france too!

There is a lot You dont know about

Turkey just antagonized a lot of people when it decided to capture Shusha and start a World war by hitting a Russian chopper on 11-9. ? I suspect it is going to regret it in the future.

Wekk, at least there is osme kind of hope. I had expected noneof them stopped :(

I don’t know who really shot down the Hind. But what has happened after that makes me really suspicious. I wonder if some azeri soldier, on russian payroll, shoot it down to give Russia the necessary leverage to impose its will.

Because this is what has happened. Putin just called the two clowns and said: “sign this peace treaty now or you won’t see the sun rising anymore”. Very different from the classical russian behaviour.

I know. But a lot of people here think that russians are morons, Putin is a fool, Russia is collapsing, etc… etc… Stereotypes are hard to die.

I share your scenario about Putin forcing the two leaders to sign. But he did it to avert a WW.

I think they are all cried out

World Wars start when there is too much effort NOT to start a war.
Europe could be in for another shocker yet again, judging by its passive appeasement policies and a spineless approach towards global issues.

Soros, the animal that is emerged out of the abuse and misery of ordinary people and poor nations. The autocrat who buys his devilish distorted inhumane world order in to greedy and willing governments. He has his tentacles everywhere even and especialy in the so called human rights sector and European legal system as the EHRC. Only a rightful persons as for example the re-elected Orban from Hungary dare to fight the beast despite the undemocratic rlected European Soros politic greedy slaves.

France has become a weak country…..

“France has mobilized its efforts in recent weeks through a very large number of civil society initiatives.”
And did nothing, ha-ha. Well, Pashinyan, did your western friends help you?

That unknown vehicle based on KamAZ looks like command vehicle with satellite parabolic antenna at roof.

Not so white after millions people from MENA.) Though the color doesn’t matter for me. 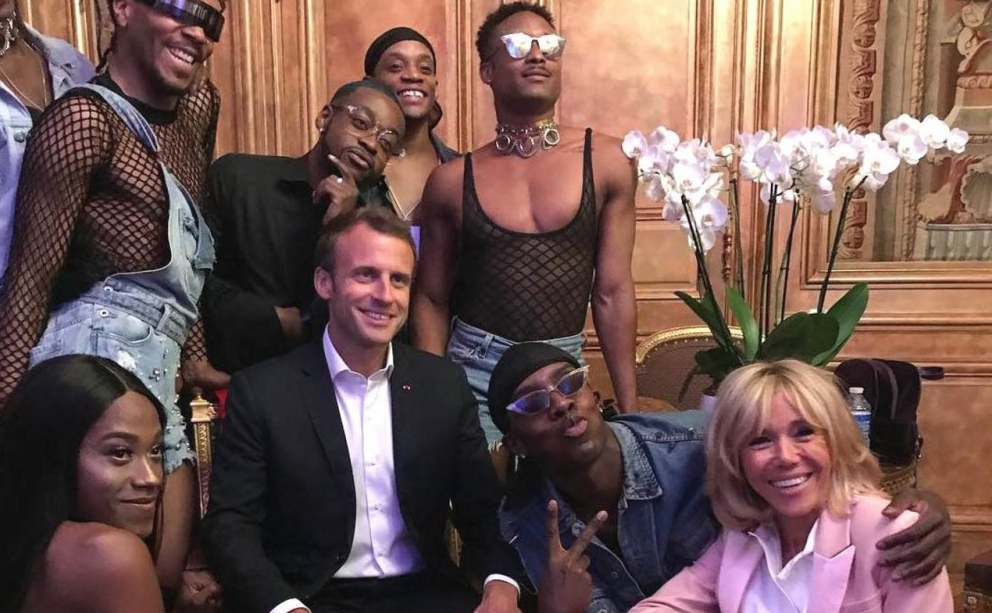