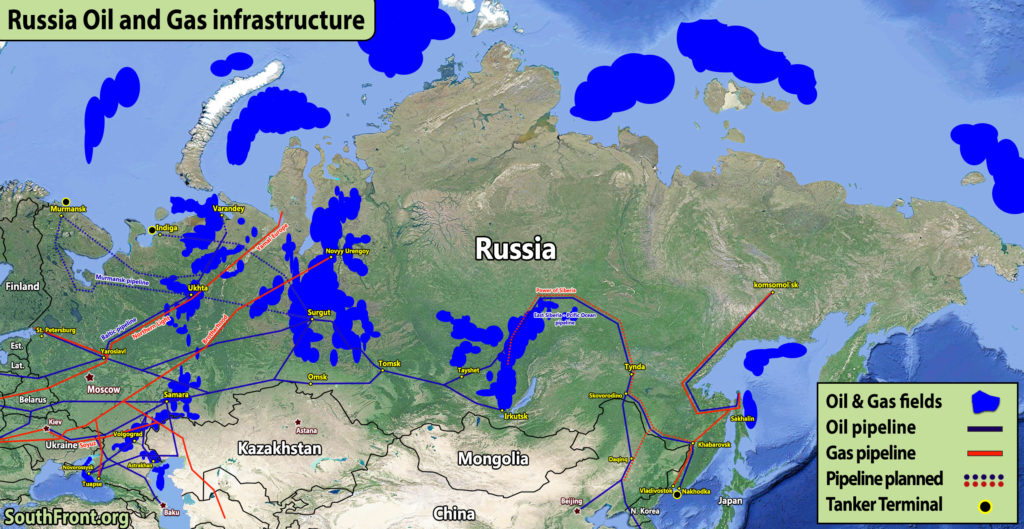 This map provides a general look at the oil and gas infrastructure of Russia.

lots of oil and lot of gas and it’s fortunate that the american planned expropriation of all hydrocarbon assets in the 1990s failed thanks to Putin and also the reason why the americans hate putin to the extent they actually do.

The Americans hate everybody, including themselves.

Toronto Tonto
Reply to  You can call me Al

Sorry they only really hate terrorists like your leader .

More like the one half dont likethe otherand visa versa:)

USA hasnt planned for expropriation of all hydrocarbon assets in the 1960s. They have tryed hard to get enough for themselves.

Kind of funny strange to pu in Putin in this and even as some kind of hero.

Its only true a lot aroun the world would like to have enough energy. Fx EU has a non carbon plan as almost the only one replacing carbon mainy by wondmills, solar electricity and, producing and saving heat and parly colling in better ways.

USA isnt USA as Your declare as Putin is the last profet but 52 states, where many invent and implement non carbon as well as they their parlamenrt in Washington has tryed to stopped polluting in Alaska about it.

Putin also have to have custumers and effective drilling, production as well as transportation. In that they are allied with EU. It make no sense to have a lot of gas and oil, id You have no buyers.

By that it dont care what USA might do as well as the 90s are long time ago. Tempting to remind You, that in the difficult areas in Russia its the BP and SHELL doing many main things. A good alliance and not only for Putin.

but the washington dc cabal do since he thwarted the yanks plan to grab all commodities in russia put on sale by jeltsin. putin stopped that crime perpetrated by the yanks and as you know, they never forget and never forgive.

looks easy enough to dismantle after the collapse of Russia and dole it out .

Some of those oil and gas fields look greater in area than France, Spain or Germany.

They are very big, but I am sure parts are “potential gas” and has a lot in them.

Looking at the seize is an illusion because of the mapconstruction – the projektion – is the most comon one. If You compare fx Greenland with Australia, Greenland is 4 times bigger.

Thast not true at all. Its about what You have to to, when You make a round apple into a football fiels.

Sibiria, Greenland and Alaska by that are very big but far from the real seize in km2.

Damn according to this image, Russia has the biggest Gas fields in the world tho. Look how much big are those in the county itself, but just imagine if the start drill those huge ones further north in the sea. My God so much Gas and Oil, we know that Russia has most Natural Gas in the world they have Oil too, but most of those field are gas. Look how huge are they. Just insane.