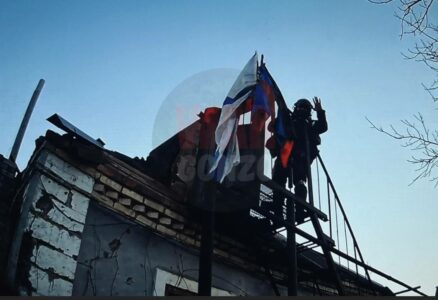 After several days of heavy fighting in the Ugledar region, the Russian military took control of the village of Pavlovka, located on the southern outskirts of the city. Russian-led forces managed to advance despite the unfavorable terrain conditions. The village is located in the lowlands, which makes it an easy target for the Ukrainian artillery deployed in Ugledar.

Control of the village is of strategic importance because it allows Russian servicemen to block the road along which the Ukrainian military supplies went to Ugledar. 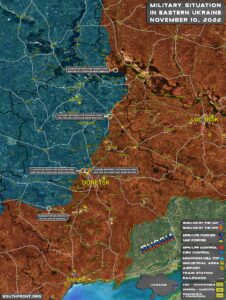 By the evening of November 9, servicemen of the operational and combat tactical formation of the Donetsk People’s Republic “Cascade” and the 155th Marine Brigade of the Russian Pacific Fleet broke through the defense of the 72nd and 68th brigades of the Armed Forces of Ukraine located between Pavlovka and Ugledar.

After DPR servicemen took control of Pavlovka, the Russian RB-341V Leer-3 electronic warfare system suppressed Ukrainian UAVs and communications of the AFU grouping deployed in the Ugledar area was disrupted. After the command of Ukrainian forces was violated, Russian T-80BV tanks and large-caliber artillery attacked Ukrainian positions. By the evening of November 11, the first Ukrainian strongholds on the southern outskirts of Ugledar were destroyed.

During the fighting, Ukrainian 120 mm mortars deployed on the northern outskirts of the city were also destroyed by Russian artillery. As a result, the Ukrainian garrison was left without operational cover.

To the north of Ugledar, Russian troops continue assault operations in Novomikhailovka in an attempt to approach the village of Konstantinovka and take control of the road leading to Ugledar. The road between the settlements partially came under Russian fire control.

On November 11, the AFU attempted a counterattack near the village of Sladkoe, but were repelled by Russian troops.

The defending Ukrainian forces are suffering losses in the area of Ugledar. Russian military sources reported that the heaviest losses were inflicted on the 72nd separate mechanized Brigade of the AFU in recent days. It is reported that the unit lost about 30 Ukrainian servicemen killed and dozens of others were injured.

The Military Command of the AFU reportedly intends to strengthen its grouping in Ugledar with units of the 15th separate Artillery Reconnaissance Brigade, which are currently deployed near the city of Pokrovsk. The operational command of the unit is carried out by former and current servicemen of the Polish Army in accordance with NATO standards.

fUKRAiNE is fucked from fUK (& .us)

good starting point to get odessa!

fUKRAiNE is fucked from fUK (& .us)

After the retreat of the Russian army in Kherson , more than 200.000 Ukrainian servicemen are ready to deploy in other parts of Ukraine. Russians will be slaughtered in there tens of thousands in Luhansk region. Ukraine has enough men power to stop the Russians and make life hard for them.

In Romania, police is walking from door to door to inform men in reserve about being called in the army.

There might be an act of aggression by NATO scum in spring. We cannot know if they want to push in Moldova or Ukraine or whatever but people are not happy at all about that.

Most would rather go to jail or be shot on sight than going into war for the country that only harms them from birth… Guys over 40 are mostly sick, alcoholic and crippled, obese and unable to squat or walk right so it is quite interesting what is the purpose of this.

TomSawyer
Reply to  USA is a shithole, EU is becoming one

Muahahaha, you russian nazis fanboys are talking such much BS, it’s hilarious 😆😆😆

Wasn’t this offensive already running for at least a month or so? When they wrote about offensive operations in the ugledar direction – was that meant as some cryptic code for something completely other? Does this “beginning” of the “aready long running” thing change anything at the front? Anything about the very stable sitting stalemate? Do they plan to “regroup their forces” away from the ugledar direction in the near future? (As all declarations of “offensives” in the past year resulted in a “regrouping of the forces” not long after…?)

Regrouping or what ever the term is all one need to do is look at Pavlovka on google maps. It has 9 streets the longest of which is 2400 feet. There are about 100 homes in the area, it has a gas station and a furniture store ..boutique type. As well as a small market.

It is pretty obvious this is simply for show. The retreat from Kherson was an agreement …brought from negotiations to lift sanctions on Abramovich who got his 6 billion back and to move some ships as well as some banking transactions. The situation can change but for now you are watching the implementation of agreements made hidden behind a fake effort.

Southfront please put in a letter limit so people cannot spam the comment section. Thank you

NATO gets its ass kicked! Hahahahahaha

Fuck off and get out, the Russian army under faggot Putin is incapable of conducting any type of offensive. Anything these humanitarian pussies might gain will be lost in a matter of hours once the Ukrop launch and offensive.

The Russians are deep into Donbas you muppet, that’s an area larger than Britain with 6 million citizens.

There’s no “might gain” about it you sad loser, the Ukraine is losing, bigly.

NSA troll farms are full of fascist brown-shirt losers. The West has turned full Nationalist. Spy on own citizens, plant evidence, and one day soon they will gladly roundup their fellow Americans to place in camps.

The whole Russian army has now been mobilised for a D-day and Endlösung offensive against Ugledar in Ukraine. The Russian MoD say he expects the Police operation and denazification of Ugledar in Ukraine to finish off in a fifth dimensional warfare manner in 2027.

First of all, Ugledar is also supplied from elsewhere! Second, it’d be better for the Russians to make a NATO-style attack to cut off the road between Ugledar and Katerinovka. Third, as you said, the village is situated lower than Ugledar, and Russians complained publicly that they lost 300 servicement in a “senseless” 4-day battle for the settleman. Of course, then the Ministry of Defense of Russia said that there were 33 dead and 250 wounded, but still… when Zelensky each evening says that “hundreds” of Russians die daily in Donbass, that’s not good! Because Russians, being the attackers, die in larger numbers than the enemy, being the defenders, and the enemy doesn’t give an inch of ground voluntarily – while Ukrainians in Kherson died in larger numbers, being the attackers, but Russia gave up all the territory voluntarily!!!

How many people actually LIVE THERE ???