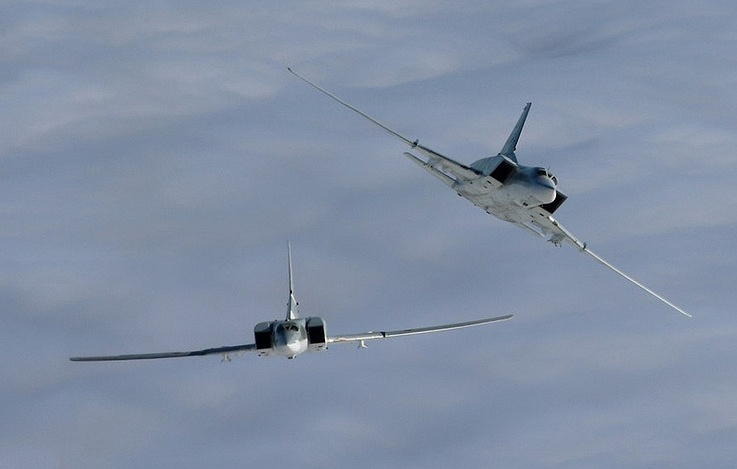 Russia has reportedly redeployed a number of Tu-22M3 long-range, nuclear-capable bombers in Hmeimim Air Base, Syria.

On June 22, Syrian sources shared footage on social media showing at least one Tu-22M3 flying over the coastal province of Lattakia, where the Russian Air Base is located. The footage is yet to be verified.

The Ministry of Defense of Russia has not announced the deployment, yet. If confirmed, this will be the second time the swing-wing bombers are sent to Syria.

On May 24, three Tu-22M3 bombers landed for the first time in Hmeimim Air Base following the successful reconstruction and development of the highway. The bombers, which were armed with long-range missiles, conducted an exercise over the Eastern Mediterranean before returning to their home base in Russia.

The expansion of Hmeimim Air Base runway made the deployment of heavy bombers like the Tu-22M3 possible. The air base can now receive all types of aircraft in service with the Russian military.

The reported redeployment of Tu-22M3 in Syria is not a surprise. The bombers may have been deployed in Hmeimim Air Base to take part in a new exercise.

For years Russia used Syria as a test site…like the US in Iraq/Afghanistan. Russia has a per-base in Syria.

You got that wrong, they were never threwn out because they were never in, they had an aggreement with Iran that they can use that base for their campaign/operations as long it takes and a permanent stationing was never in question because of the general Iranian stance on that topic and because of the Iranian constitution….the Russians were absolute fine with it and have no problem with it at all, the claims they were salty because of it is total nonsense…..maybe you got that false assesment from western MSM who always wrongly interpret such things or flat out lie to fabricate a certain narrative and imagine some sort of tension between Russians + Iranians. BTW the Russian Hmeimim Air Base in Syria has now two brand new Runways of the same size like the one at US Incirlik Air Base in Turkey.

It was Chris Lee from the NHL the ref!!

The Jews’ US Tyranny plans on using tactical nuclear bombs in Iran in the Jews’ coming war on Iran. Maybe, as a deterrent to the Jews, the Russians want to show the Jews that they have tactical nuclear capability in the region.

They are against Nato in the Med.