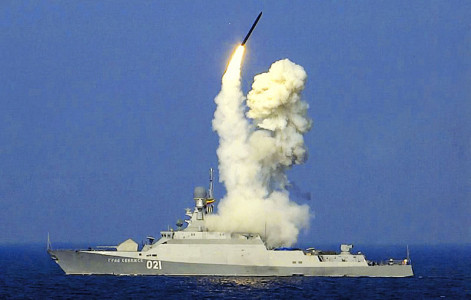 And on August 10, the Yekaterinskaya Bay of Polyarnyy saw the departure of B-261 Novorossiysk, the lead ship of Project 06363 Paltus diesel submarines, developed by TsKB Rubin and built by the Admiralty Yard and delivered to the fleet last year. It also set sail for Novorossiysk, which will become its permanent base. It will arrive at its destination on September 25.

Zelyonyy Dol and Serpukhov have this in common with Novorossiysk that they are the first phases of the Black Sea Fleet modernization, but also that they carry Kalibr missile systems (known by their export designation “Club”), which are intended to strike naval and land targets. These missiles were developed by Yekaterinburg-based OKB Novator, which is part of the Almaz-Antey Concern.

Novorossiysk was sent North to allow its crew undergo training, including maximum depth dives and Kalibr launches. On August 3, the submarine successfully completed the missile testing routine, having launched a cruise missile from Sea of Barents against a target located at the Chizha range in Arkhangelsk Region. This exercise will soon be repeated by Rostov-na-Donu and Staryy Oskol Black Sea Fleet submarines which have already been delivered to the Navy. Then it will be the turn of Krasnodar, which is undergoing tests on the Baltic, and Velikiy Novgord and Kolpino which are being built by the Admiralty Yard.

Each Project 06363 submarine, with a submerged displacement of 3950 tons, carries 14 torpedoes and 4 Kalibr-PL missiles. They can be used against naval and surface target. Ships can be attacked out to 300km, while land targets, depending on missile type, at up to 300-2500km.

In actuality Kalibr is a whole family of missiles with numerous subtypes, intended for Russian Armed Forces and foreign customers. There are variants for Ground Forces and Air Forces use, but these missiles are being used most extensively by the Navy. They are manufactured for submarines (Kalibr-PL) and surface ships (Kalibr-NK).

The Kalibr family has a common ancestor, the KS-122 strategic cruise missile of the S-10 Granat system, developed by the very same OKB Novator. Granat was accepted into Navy service in 1984, to be launched from submarine 533mm torpedo tubes. KS-122 had an inertial navigation system and could follow a terrain-following trajectory, “sneaking up” on the target on low altitudes at ranges over 2500km. These targets could be military and state command facilities, military bases, important industries, and similar facilities.

Kalibr family cruise missiles are equipped with conventional warheads (penetrating, HE-fragmentation, or cluster) with the weight between 220 and 450kg, depending on the variant. They are high-precision munitions. Kalibr land-attack missiles can be used as non-strategic deterrent weapons. That’s a useful feature in the current tense situation caused by NATO efforts to expand eastward. Moreover, such missiles are not subject to the Intermediate Nuclear Forces limitations.

That’s why we are witnessing mass “Kalibration” of the Russian Navy. The first ship to receive Kalibr-NK was the Dagestan light frigate of Project 11661K built by the Maksim Gorkiy plant in Zelyonodolsk. It entered service on November 28, 2012 after a successful Kalibr launch at a land target. It was followed by three Project 21631 Buyan-M small missile boats: Grad Slavyazhsk, Uglich, and Velikiy Ustyug. These small ships with full displacement of 949 tons carry 8 Kalibr missiles each in UKSK vertical launch cells, which can also launch Oniks supersonic anti-ship missiles. Grad Slavyazhsk carried out a successful launch in September 2013 against a land target.

Submariners began acquiring Kalibr starting with the K-560 Severodvinsk of Project 885 Yasen submarine class, built by Sevmash. It carried out several launches in 2013 and 2013, both on the surface and submerged. The submarine can carry up to 32 missiles of this type. Six additional submarines of this class will be similarly equipped.

The Zvezda and Zvezdochka plants are currently performing a deep modernization of several Project 949AM and 971M submarines, including Bratsk which once performed the double Granat launch. They will receive Kalibr-PL. The Project 949AM submarines will carry up to 72 Kalibr-PL and Oniks missiles.

Thanks to the cruise missiles, nuclear and conventional submarines will no longer have to change ship targets all over the ocean, but strike them in their ports, attacking from long ranges. They can now attack a wide range of land targets and from directions poorly protected by air defenses. This also applies to attacks on surface ships. In the near future, Russian submarines, missile boats, and surface ships will be able to hold at risk all important sites in Europe and in the Middle East. While the nuclear subs will have the US as their potential target.

Currently undergoing trials is the frigate Admiral Grigorovich, which also carries Kalibr in vertical cells. However, unlike Dagestan and Buyan-M class, it can also be armed with the anti-submarine variant of the Kalibr, the 91RTE2 ballistic missile capable of striking enemy subs out to 40km.

The Yantar plant in Kaliningrad is preparing to launch Admiral Makarov, the third ship fo this class. They have resumed work on the two following ships of the class, and the sixth frigate, Admiral Kornilov, is about to be laid down, intended like all the ships of the class for the Black Sea Fleet. Apparently the problem of gas turbine engine supply has been solved, after Kiev ordered the Nikolayev-based Zorya-Mashproyekt plant to stop deliveries.

Kalibrs will also be carried by Project 22350 frigates built at the Northern yard, the lead ship of which, Admiral Gorshkov, is also undergoing trials. Its bow section contains two UKSK 8-cell clusters for 16 Kalibr and Oniks missiles. They, too, can launch anti-submarine 91RTE2.

We finally must mention the latest TsMKB Almaz design, the Project 22800 Karkurt seagoing missile corvette. The design work on this 800 ton ship class capable of carrying up to 8 Kalibr-NK missiles is being completed. The lead ship will be laid down in late 2015 or early 2016. Navy Commanding Admiral Viktor Chirkov said that the Navy will order no fewer than 18 ships of this class.

We believe that the idea of placing Kalibrs in standard 40-foot containers (the Kalibr-K system) installed on civilian ships, including riverine ones. Such concealed floating arsenals can operate on seas and rivers unnoticed.

Club-S export version is also enjoying success. It has been installed on more than twenty diesel-electric submarines delivered to Algeria, Vietnam, India, and China. Iranian sailors are casting covetous gazes at them.

The West clearly understands the power of the Kalibr system. Not for nothing did they name it the “Sizzler.”