Admiral Gorshkov frigate of the Navy’s Northern Fleet launched the new missile in the White Sea against a target at a distance of 450 km.

During the test firing the missile flew to a range of 450 km, climbing to a maximum altitude of 28 km. The flight lasted four  minutes thirty seconds, during which the missile gained a hypersonic speed of over Mach 8.

“the tasks of the launch were fulfilled, the test-fire was recognized as successful and the missile was registered to accurately hit the target,” TASS quoted Gen. Gerasimov as saying during the video call.

President Putin called Zircon hypersonic missile’s successful test a “great event” for the country, praising those who worked on the project.

“The work on the Tsirkon system and the stage of carrying out a successful test of this missile is a major event not only for the Armed Forces but for entire Russia, the entire country because equipping our Armed Forces – the army and the fleet – with advanced weapons systems, which indeed have no rivals in the world, certainly ensures our state’s defense capacity for many years to come,” Putin said. 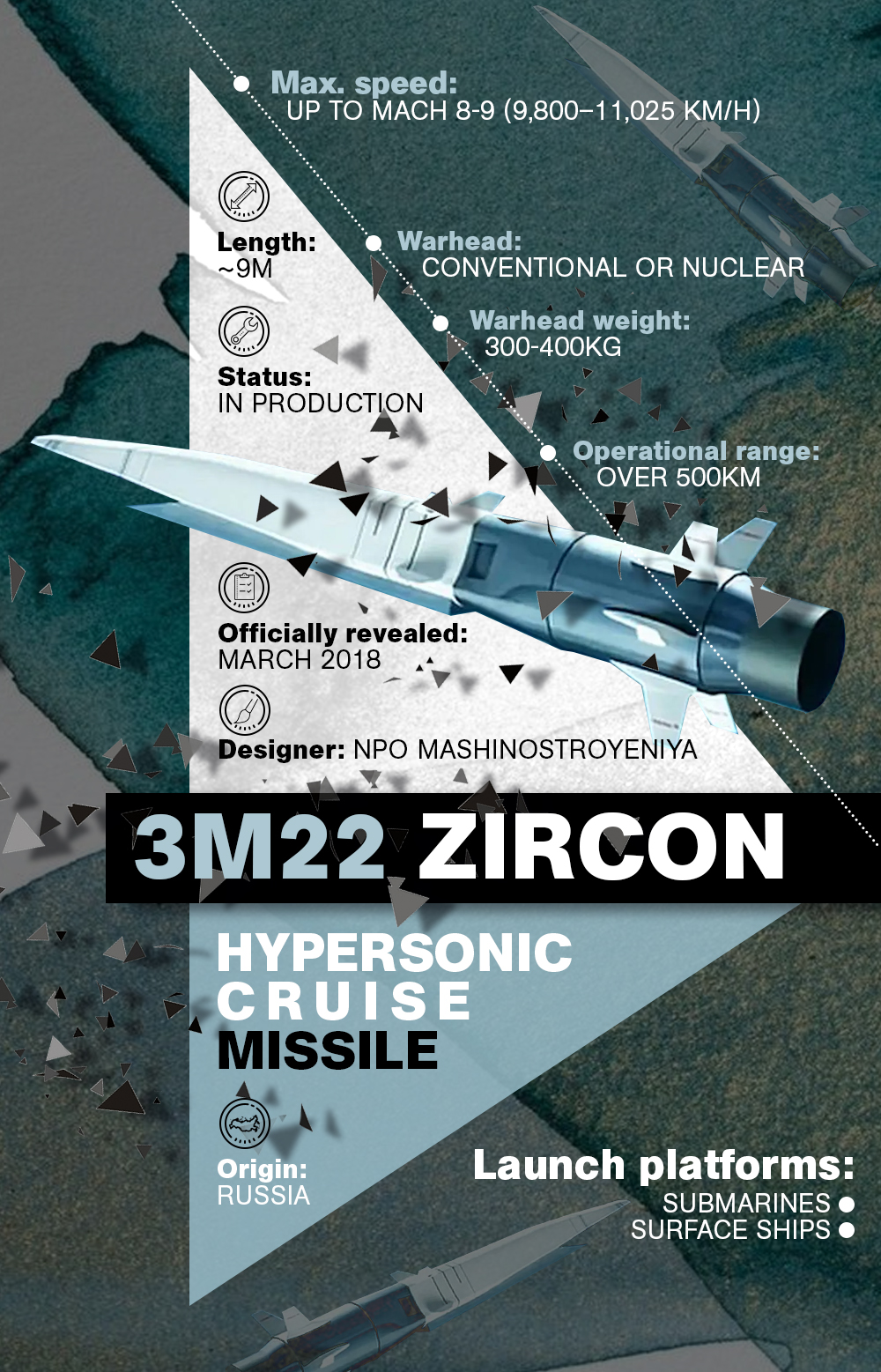 The hypersonic missile poses a serious threat to the naval forces of Russia’s adversaries. The Russian Navy’s surface ships and submarines will be both armed with the missile.

The Zircon is one of many hypersonic weapons developed by Russia in the recent years. While many of these weapons have already entered service with the Russian military, other countries are still struggling to develop such systems.

Now you see it… now you don’t. Would not want to be on the receiving end of that bad boy.

Shots from one stupid Hollywood movie. The most interesting part is using Tu-22 and H-22 against CAG.

This missile is no threat to the U.S. – we’ll be able to see these things clearly with our National Defense Space Architecture. By 2026… with tranche 2 whatever that is. Some day, we’ll even be able to shoot them down with our US death ray satellites. So take that Russia. NOBODY sneaks any missiles past the US Space Force. After 2016, anyway. No fair using them until then.

Dude, this ain’t Hollywood, this is real stuff

:) Pave is known for unique sarcasm and criticism toward US supremacy.

I didn’t mind our former supremacy so much. It’s the death cult of degenerate psychopaths that run this place now that kind of bothers me. They seem… dangerous.

Slow down there, cowboy. Finish building some Columbia class boomers to replace that ancient Ohio class …

It must be Tommy’s day off!

100 km per minute. Kinetic energy of impact is very high and allows to destroy targets even without explosives, like a meteorite.

In fog or low clouds. But it also disappears from radars. Speed is too high to track and lock such target. Only start and hit can be detected by modern AA systems.

Our US Space Force engineers are all over this. Their top minds are on the job. We should have countermeasures by next week. Two weeks, tops.

nah it is star trek logo….

Someone has watched too much comic movies and then created such emblem. You think your artists are unique? No, our artists have their hands growing from the same place (ass). Their new emblem for the army looks the same as the sign of mall network in your country. This one, with 3 colors. After that they changed it to 2-color emblem. Comics is evil.)

The war is moving to a new level, the use of these weapons calls into question the military tactics adopted up to now, the Yankee robbers must postpone the hopes of global domination until a later date, in the meantime they can only tell about phantoms sixth generation missiles and aircraft that no one has ever seen live.

I wonder what will happen to the civilians. A think like this makes a lot of sound while riding in the sky. People near the target could easily lose hearing or get killed by the shockwave.

Since it isn’t very large, won’t the Shockwave also be smaller than say a jet’s?

Nope. It is relatively small, but its kinetic energy is very very high.

One would be enough to vaporize Al Tanf.

US and Zion: “SPACEX IS AWARDED $149M CONTRACT FOR MISSILE-TRACKING SATELLITES FROM THE PENTAGON”

What the heck is going on with SpaceX carrying the whole US extraterrestrial mission lol?

Looks to me as though building rockets in USA is still pretty much in infancy.

They have to start one day…

1 yasen class SSN will carry 50 of them. Enough to destroy an entire fleet.

I was hoping it to be a sea-skimming missile, but it climbed to an altitude of 28KMs and that’s a lot. Looks like a short range ballistic missile with some degree of maneuverability.

It is built to kill aircraft carrier groups. So it goes up, then it falls down at hypersonic speed. It isn’t made to be excessively maneuverable. Maneuverability is a distinctive trait of Burevestniks.

almost like your mom when tag-teamed by her clients

Thats your mom in Kievistan…?

bacon in zhitomr? or kansas?

Ukros supporting Az. and Turkey, not even the US.) Servants for life.

The doctrine for a “global blue water fleet” got just a heck of a lot more expensive. If one, or even a couple Zircon sinks one DDG they must still be pretty cost effective. And they come from submarines which can be anywhere…

Awesome missile, and on such a small platform too. This is the way.

there is a guy that impersonates you, can you spot him?

CIA photoshop–u can do better Jenny

It’s not a montage. Just stop diaphragm of camera in opened position and you’ll film trajectory of luminous objects.

Russia faces a dilemma which has no good answer:N-K. Russia floats super weapon stories because it feels so insecure presently due to the deteriorating circumstances on ALL its borders. Turkey thwarts Russia in Libya, Idlib and now N-K. Yet Russia can’t throw down directly with Turkey without risking WWIII. Erdogan’s dream of a new Ottoman Empire grows daily. Erdogan doesn’t over extend. He uses proxy forces to his advantage. Putin plays good chess too, but he is taking a long time to move his next piece because the alternatives are all bad. Putin knows a wider war in the Caucasus is very much to his disadvantage. In the meantime NATO gains friend/members on his borders. Time for a paradigm change. Not via weapons. Via a new diplomacy. Peter the Great sought an influx of western culture to Russia’s lasting advantage. Do it again. Germans make better friends than enemies. Russia’s strategic peril is spelled CHINA.

Good post. Problem with Russia and the countries aligned with him is their own INTERNAL dissatisfaction. Sooner or later people want to watch and read what they want; on TV, radio, the press, internet; say what they want, laugh about what they want, vote for the party they want, watch them debate without going to jail or getting beaten up or killed.

One by one Russia political allies will fall and then the Russia govt itself; because of their State oppression, of their own people, even just to express themselves.

USA spends 10 times more than Russia and they produce inferior weapons designed to invade 3rd world nations…..lost every war in their history what will their colonies do when their empire collapses in the next few years?