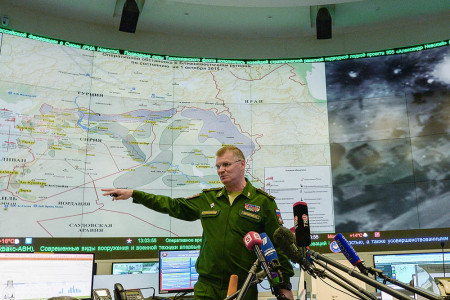 Russian Federation Ministry of Defense (MOD) could not leave without comment the shocking statement by US State Department spokesman John Kirby. During a briefing, he plainly predicted Russian cities would be attacked by terrorists. According to the US official, if the war in Syria continues, terrorists will start launching attacks on Russian cities, and Russia will send its troops home “in body bags”, and “continue to lose assets and, possibly, aircraft.”

The Russian MOD interpreted such statements as US admission that the “opposition” supposedly waging a “civil war” in Syria is in reality a US-controlled terrorist “internationale.” What is particularly shocking in Kirby’s admission, according to Russian MOD official representative, Major General Igor Konashenkov, that the US direct influence over terrorists is global in scope and extends to Russia, among others.

“Concerning Kirby’s threat concerning possible loss of Russian aircraft and sending Russian soldiers home ‘in body bags’, I will say that we are well informed on where in Syria, including in Aleppo Province, and exactly how many ‘unadvertised’ specialists are engaged in operational planning and commanding the militants.” Konashenkov added: “Naturally, one can continue to keep telling us they are stubbornly but ineffectually trying to separate Jabhat al-Nusra from the ‘opposition’. However, if there are attempts to make good on these threats, it is far from a foregone conclusion the militants will be able to help them save their skins.”

Russian MOD advised John Kirby not to forget his officer’s honor, in spite of exchanging a rear admiral’s uniform for the suit jacket of a State Department representative.

Moreover, Russian military once again stated it is ready to continue dialogue with the US to work out joint measures against terrorists in Syria.

“But that dialogue should not contain even a hint of a threat to our troops and citizens. When it comes to ensuring the safety of Russian citizens, no matter where they might be located, there will be no bargaining. This is our main and unconditional priority,” General Konashenkov concluded.

The Russians are extremely polite and professional.

Since Kirby is doing his best Godfather impersonation, I am impressed that they can restrain the urge to send him a Jihadist’s head in the mail. Well they can do that figuratively by finally crushing the Jihadists in Syria who have virtually destroyed the once beautiful country of Syria.

Keep focusing on the heart and minds of the Iraqi people

Having nukes means Uncle Shlomo will rant and kick chairs…….yet will not fight you. North Korea understands how the game works.

Syria does not have any nukes……Unless they recieve Iskander system

The Iskander appears to have several different conventional warheads, including a cluster munitions warhead, a fuel-air explosiveenhanced-blast warhead, a high explosive-fragmentation warhead, an earth penetrator forbunker busting and an electromagnetic pulse device for anti-radar missions. The missile can also carry nuclear warheads.[1][9][10] The first successful launch occurred in 1996.[11] Wiki

There is Iskander in Syria with Russian airbase. Russia MOD could comment that all Iskander units are issued with nuclear warheads.

Leave Israhell and US to ponder if Syria just got an A game : )

The Kalibr cruise missile can also be tipped with a tactical nuclear warhead. That’s why the Russians used them for the first time only days after the Syrian Operation began. It was to send a signal to the entire NATO-GCC-ISR complex, to not try anything stupid.

Americans worry that China could put nukes in a container. … Container ship off the US coast could defeat US defence reaction. Container even prepositioned off US east coast via Islands with retired rich people Who bring their assets in by container ship.

Kalibr is Breakthru technology. Not surprising. ..as Russia was first in space and first in everything until NASA faked The Moon landings.

It’s been a dizzying ride since JFK assassination. … The deep state wants war for military industrial complex. … First Nations people’s USA remind that the US government honors no treaty.

The U.S. regime has been worrying about the contents of container ships for decades, now…

And we’re not talking about drugs.

Very nice and robust response to an arrogant bunch of Lunatics …who definitely must have lost touch with history ..

Happens to every empire, eventually.

esp. when the empire’s controlled from Tel Aviv.

Never will be news

Polite and professional rebuttal to the us thinly veiled threats. Kirby is starting to sound like the saudi defense minister. Russia should already be looking into sending humanitarian aid to the Yemeni people and military aid to the Yemeni government. If the saudis are desperate to defend Riyadh then they may start diverting funds and personnel to southern saudi arabia to help stop the Yemeni from finishing the war the saudis started.

Arm Lebanese defenders with all they need to shoot down every single F-16 that will ever fly over their homelands. While they are at it, go ahead and sell Iran the S-400 system and arm the Yemen people to the teeth with basic mid tech defensive weapons. With Yemen sticking way out into the ocean, and Iran. They will keep the USSA forces far away from the southern flank of the Middle East forever. And with Lebanon ready to defend themselves, that will keep the Jewish-Supremacist-bigots away from advancing forever as well. Russia wins!

Clearly, the russians — and the chinese — never make such moves until they absolutely have to.

But they shall, yes. Because ‘America’ wills it so.

Americans have no clue about any of this. The globalists who control America will it, to our mega-death(s).

One of the professional codes is not to threaten. It is to be clear, timely and there is no kidding. Mr Kirby and the rest better get their heads together or something is going to take their breathe away.

When I trained in the early 80’s during my service, it was understood that combat with Russia, was something for which we would depart and probably not return. They spoke in terms of seconds, in which my helo that i worked on, would be shot down in contact with the Russians. We half expected to be dead, hoping we did not have to go through with it all. They did not train us to live a long life, get a college degree after service and eventually retire comfortably. We were taught only to think, survive and fight as long as possible; true predators. That was the USMC in the early 80’s.

To be blunt. people like Kirby, Kerry and the rest, either never understood or have forgotten too much. It endangers everyone. Upon reading the diplomatic and public military exchanges since yesterday, I am not walking around with a smile or a glad heart. I think we have entered the envelope. I want to be wrong.

Nothing professional about shooting fish in a barrel — which is essentially what the U.S. Military machine has been doing, most of its existence.

With the Pepsi generation, I would mostly agree.

I am convinced that there is a whole group of knuckleheads that believes that the Cold War started in 1979 with Afghanistan and ended in 1990 who think that proxy wars are a one way street. Well it aint. It’s a two way street. In the first Cold War there was also Vietnam where the Russians provided SAM missiles, MIG Jets, AK-47’s and explosives to N. Vietnam to great effect.

These are old guys who should remember Vietnam, in the State Dept and Pentagon, can they really be this stupid to think that the can just pass out weapons to terrorists kill Russians and there will be no blowback anywhere? The Russians can start with Yemen to make the Gulfies scream like a stuck pig and then work from there.

People like Kerry for instance, McCain too, were never the real deal. McCain did his time in camp but, he came back somebody else and apparently does not have a good rep with those who were also there. For instance, the guys who were my mentors, would never have sat on the shoulders of AQ and smiled while they cheered for them.

So Chris, basically yeah. We are being led by many, who in the eyes of my crowd fought long and hard to prevent them from getting in power. Grok below, also alluded to the fact that especially after the fall of the USSR, it just became a game. A hard hitting outfit, which the US military was by the mid 80’s, became a financial game. We are very screwed right now. Hence the contorted faces and looks upon those with whom our safety has been entrusted.

Everything is no -mans land until you get to the oil and poppies fields?

What a sack of shit that Kirby is.

Probably gets a promotion now since his mentality suits the establishment 100%.

There is another one………. The US Ambassador to the United Nations

Russians are Christians. The US Government are Satanist.

Here comes WW3. Globalist satanists that control the U.S. push Russia into reaction to our aggression.

I’m sure this will turn out well for everyone.