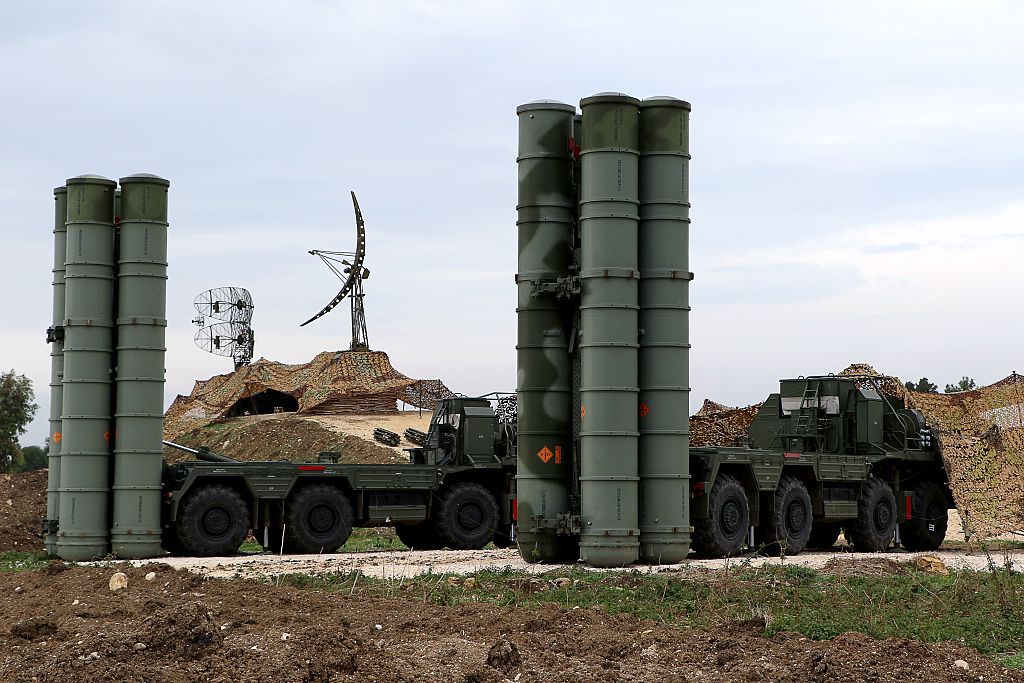 Radical militants launched 17 rockets at the Russian Hmeimim airbase in southern Lattakia in the early hours of May 22, the Russian Reconciliation Center for Syria revealed in a new official statement.

“8 of the rockets didn’t even reach the airbase. The remaining 9 rockets were intercepted by air-defense forces in the Russian airbase,” the statement reads.

According to the reconciliation center, the rockets were launched from the demilitarized zone around Idlib, which was established under a Russian-Turkish agreement last September.

In what appears to be a respond to the attack, Russian warplanes carried out heavy airstrikes on militants’ positions in the city of Jisr al-Shughur in northwestern Idlib in the noon of May 22.

The rocket attack on Hmeimim coincided with a large-scale offensive by Hay’at Tahrir al-Sham (HTS) and its Turkish-backed allies on the Syrian Arab Army (SAA) positions in the strategic town of Kafr Nabudah in northern Hama. The army repelled the first wave of the attack, but was later forced to withdrew from most of its positions.

Despite these growing violations of the temporary ceasefire agreement, the SAA and Russian forces appears to be committed to de-escalation for unclear reasons.

Selling S-400 to Turkey isn’t equivalent to fighting terrorism, for better or worse, with or without Russian SAMs, Turkey is a NATO cuntry hosting US nukes.

It shouldn’t be allowed to become a “complicated” relationship like with ISISrael, which when terrorising, bombing and violating Syria’s sovereignty is told by Russia: “when you bomb Syria, just make sure it is 200 metres from wherever we are”. NATO/Turkey’s al-Qaeda allies are taking territory from the SAA, and bombing Russian bases, but it looks like enough is never enough for the Russian strategists.

Putin is going down and takin the Russian shitthole with him .

You dreams my friend.

It was a big mistake transporting those militants to Idlib’ should have been executed instead.

Not my friend that was not the mistake, that was a wonderful idea. The mistake was made by Russia by trying to please Erdogan (economical ties) with the Russia-Turkey agreement on Idlib. This agreement just created a safe havens zone for terrorists and Turkish. Russia, then, stopped the SAA offensive on Idlib, and Putin continue pleasing Erdonga,

Agree with part of what you say; Lavrov seemed to have a love affair with Kerry and that was when the US set up the bases and attacked Syrian and allied troops. Regarding Putin and Erdogan, maybe Putin is stringing him along; Russia has a habit of enforcing paybacks.

Are the reasons really as “unclear” as the article states? Putin’s own spokesman Yuri Peskov is a committed Turkey lobbyist, which in the Kremlin system automatically implies that he and his family have big financial interests in the country. What is unclear is rather why Putin sought a new term as president without any apparent agenda to put his own house in order.

One hesitates to admit what is clear enough, because it is so disappointing.

The Russians have a very high tolerance for the rebels don’t they, no matter how many times the rebels attack the Russian bases the Russians do nothing more than launch airstrikes in retaliation, which seem to have been totally ineffective due to the rapid redeployment of more drones and rockets every single day. “If the US endanger Russian servicemen during cruise missile strikes we will respond accordingly”, but if the rebels attack the Russians, they instead play this funny game with them, whatever it’s called.

Meanwhile the Terrorists are burning up Syrian forests and farmland, and the US is certainly not leaving. Poor Syria.

Remember when the media and all the SF commentators used to refer to Putin as a strong man/He man, all those photo shots of a shirtless Putin out in the rugged wilderness doing manly things, now all we get is the brilliant diplomat/politician hype instead, maybe it’s because he’s getting old and maturing. He is a brilliant politician/diplomat that’s true, but it’s also true he’s a disloyal manipulating user, as you said, poor Syria, but I’ll add poor Assad, he may need to flee for his life by the time this fiasco is over, hopefully Putin at least gives him life long exile if he needs it.

Totally right, and this is due to the economical and commercial ties Russia-Turkey have. Russia does not want to hurt Turkey feeling and will not allow Syria-Hezbolah-Iran-Russia ground forces go so far on Idlib.

Iran is also capitulating to Putin’s demands to some extent, they’ve also agreed to resolution 2254 and a new constitution for Syria, which will mean the end for Assad, meaning Assad’s 2 most loyal allies are preparing to throw him under the bus when the situation calls for it, no loyalty in politics is there. They’re all just a bunch of prostitutes.