According to the Russian Defense Ministry, Russian military has found evidence of terrorists’ usage of chemical weapons in the area of the 1070 Apartments project in the south-western outskirts of Aleppo city. 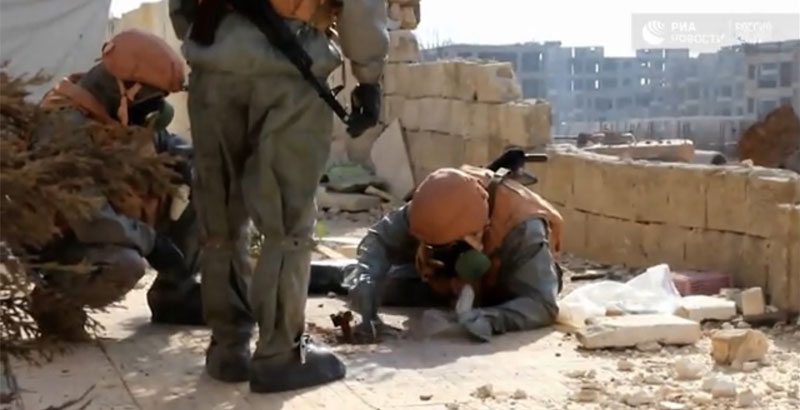 Russian military found evidence of usage of chemical weapons by terrorists in the south-west part of the Syrian city of Aleppo, spokesman for the Russian Defense Ministry, Major General Igor Konashenkov, said.

“During reconnaissance in the area of the 1070 Apartments project (the south-western outskirts of the city of Aleppo), officers of the Scientific Center of Troops of Radiation, Chemical and Biological Protection (NBC) found evidence of terrorists’ usage of chemical weapons against Syrian civilians and military personnel,” Konashenkov said.

According to the Major General, Russian military found terrorists’ unexploded artillery ammunition with chemical agents, and took soil samples at the site of their applying.

“After rapid testing in a mobile laboratory, it was found that toxic substances, with which militants’ artillery shells were filled, are most likely chlorine and white phosphorus,” the spokesman for the Russian Defense Ministry noted.

Earlier, it was reported that a joint mission of the UN and the OPCW (the Organization for the Prohibition of Chemical Weapons) on investigation of the use of chemical substances for military purposes in Syria recognized that the Syrian government was responsible for two of the nine chemical attacks that were studied, while terrorists of the Islamic State (IS) group were blamed for another attack. In the last submitted report, the mission accused the Syrian authorities in another chemical attack. Experts concluded that toxic gas was used in the province of Idlib on March 16, 2016.

As Russian Foreign Minister Sergey Lavrov said, Moscow considers the report of the OPCW on the use of chemical weapons in Syria helpful and is ready to assist in the investigation.

At the same time, Russia’s Permanent Representative to the UN, Vitaly Churkin, noted that there still are many questions on the submitted report, and it is not enough for introduction of the UN Security Council’s sanctions against Damascus.

Pretty much Katyn no matter what they find. The West doesn’t want to hear it. “According to the Polish diplomat Edward Bernard Raczyński, Raczyński and General Sikorski met privately with Churchill and Alexander Cadogan on 15 April 1943, and told them that the Poles had concrete proof that the Soviets were responsible for the massacre. Raczyński reports that Churchill, “without committing himself, showed by his manner that he had no doubt of it”. Churchill said that “The Bolsheviks can be very cruel”. However, at the same time, on 24 April 1943, Churchill assured the Soviets: “We shall certainly oppose vigorously any ‘investigation’ by the International Red Cross or any other body in any territory under German authority. Such investigation would be a fraud and its conclusions reached by terrorism”. Unofficial or classified UK documents concluded that Soviet guilt was a “near certainty”, but the alliance with the Soviets was deemed to be more important than moral issues; thus the official version supported the Soviets, up to censoring any contradictory accounts.”

It seems the Syrian and Russian forces need to bring in some type of early warning, maybe some sheep, mad dogs or donkey’s…..also known as the UN. Or some short-sighted, hard-of-hearing expert could be used to make a detailed analysis. One can find them at the UN too. It’s like a one-stop shop for broken mandates, skewed analysis, biased reporting, obfuscation and cover-up.