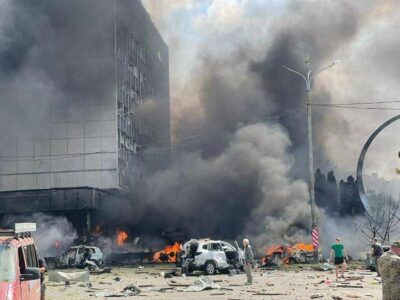 On July 14th, the Russian Aerospace Forces struck objects in Vinnytsia and the region with high-precision long-range missiles. According to preliminary information, the targets of the attack were military facilities adjacent to the House of Officers of Vinnytsia, where the formation of Ukrainian Territorial Defense units was carried out. Another target was a military unit in the city of Gaisin in the Vinnytsia region, where Ukrainian forces were amassing and military equipment, including armored vehicles and artillery supplied from abroad, was stored.

At least 20 people were killed, including civilians. Three children were reportedly killed. 52 others were wounded.

According to the city police said a total of three missiles hit the downtown. Ukrainian air defenses shot down four other missiles over the city, according to Sergey Borzov, the head of the Vinnitsa Region administration. However, the city administration did not clarify where they fell. 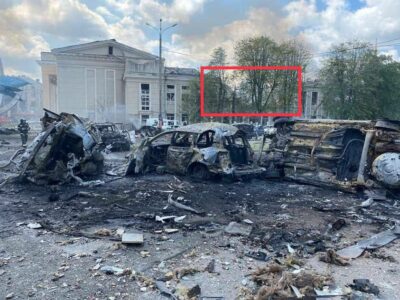 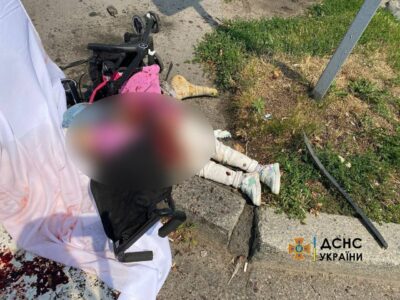 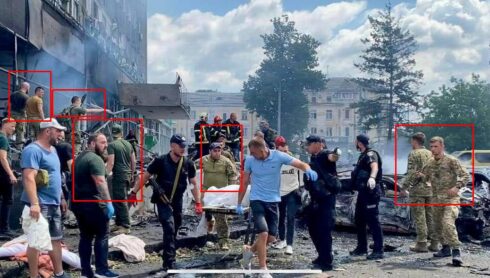 On the first videos and photos a large number of people in military uniforms are clearly visible, including with weapons. This refutes the thesis of the Ukrainian side that the building of the House of Officers was used exclusively as a civilian object.

Judging by the footage from the region, civilians were injured and houses were damaged in different areas by the missiles that were intercepted by Ukrainian air defence systems.

Wreckage of one of the intercepted Russian missiles:

The Russian military is yet to comment on the attack. Details will be likely revealed in a daily briefing on July 15th.

RT Editor-in-Chief Margarita Simonyan cited a Russian defense official as confirming the attack and saying that the House of Officers was the intended target. Ukraine used it as a temporary shelter for its “Nazi” fighters, the source claimed. In turn, Ukrainian media claimed that the weapons hit an office building in the city center. Reports said they also damaged nearby residential buildings and the building of the House of Military Officers, an institution operated by the Ukrainian Defense Ministry, which normally serves as a concert hall.

Ukrainian President Volodymyr Zelensky decried the incident as the latest atrocity allegedly committed by Russia, claiming on social media that that Russian troops targeted civilians on purpose. According to Zelensky and Ukrainian media, the Armed Forces of the Russian Federation struck at the maternity hospital and medical center in Vinnitsa.

However, footage from the area confirms that the main target was the House of Officers used by the Ukrainian military. Under martial law in Ukraine, the building was turned into a temporary accommodation point for Ukrainian troops. According to the footage, Russian missiles hit two wings of the building. Most likely, they were used for military purposes. The central part of the building, where the entertainment hall is located, was also damaged. 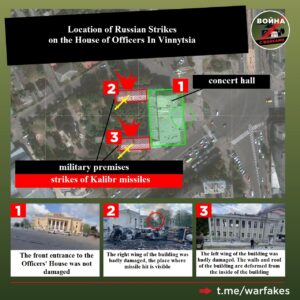 The medical center located nearby was likely damaged by the blast. The medical equipment and disinfectants could cause a large explosion.

US has been killing million of innocents peoples in the Middle East lol.

You can see in the videos that this shitty town is full of young military age rednecks with BMWs and so on. Just having a leisurely life. Drinking beer. No need to work. Plenty of time. Drafts to AFU do not apply to them, either. Living peaceful life, eh :D

Vinnytsia is one of the regions from where young Neo nazi bastards were bussed to Odessa on May 2nd 2014 to commit the Odessa Massacre and burn/ murder Russian speaking people alive in a public government building including small children the elderly etc… anybody who was out in front of that building protesting against the U.S regime change new ukro government at that time then they were all attacked and pushed into the government building to be slaughtered just like nazis did in WW2.

Putin, on 23 February this year mentioned something about having these criminals rounded up and prosecuted for these crimes.

What Putin said was that “we know who you are”, which was less specific but more menacing. It implied that Russian on-the-ground intelligence throughout Ukraine has been keeping track of the killers and that they will be targeted with extreme prejudice.

Glad they got missiled then!

Horrible. And (also) because of that, the special military operation will continue. After donbass is liberated the allready liberated southern parts can be strengthened as well as the Kharkov region, and new targets will be set. Slava Russija.

The world owes President Putin and the Russian people a debt of gratitude for their efforts in eradicating the scourge of fahclsm and nahtzism where-ever it rears it’s ugly head.

God bless you President Putin and the people you lead !

I LOVE THE SMELL OF BURNT UKRAINIAN IN THE MORNING ! ! !

As long as you make it early enough in the morning where night owls can sleep right through it.

Ideally burnt Orcranian is best in the evening. Late at night also okay.

But not late mornings, because most people prefer smell of burnt arabica coffee at these hours.

Yes…. Burnt Anything is what these Nazis LOVE…. who ran that “Dr Evil” Crematorium for Innocent Civilians in Odessa! ….probably w/ CIA Connections too!

Horrible! A kid on a stroller with her mother! :( Collateral damage, but horrible nevertheless!

Just don’t believe anything that comes out of Zelensky’s rotten mouth. Everything he says is a lie.

crocodile tears … remember this from 8 years ago … Ukraine aircraft strafing civilians in Lukansk with 30 mm cannon fire. Now these bastards want us to feel pity for them.

your right but I think she was genuine both are bad.

fuck off you dumb whore

Zelensky is to blame.

The US and UK, + the big nose parasites are 100% to blame for all the carnage in ‘Ukraine’.

They parasite off their people and the rest of the world.

Without a doubt its the Ukrainians that once again killed their own people. Russia has been surgical and always targets military infrastructure and buildings without killing civilians.. The Ukrainian military on the other hand has been murdering their own citizens since 2014. Russia must continue with its SMO and no longer should Russia care about the public perception of the people of the U.S. and western Europe. The majority of the citizens of the EU and the U.S. are in a state of mental hibernation anyways, they are unable to differentiate truth from lie or right from wrong. Putin is going to visit Iran which means that Iran will definitely be joining forces with Russia alongside Belarus, Syria, China and North Korea who a few days ago recognized Donetsk and Lugansk. You see what’s happening and it was long overdue. Russia is getting ready to form an official military alliance with the aforementioned countries to counteract NATO. I am sure that other countries will soon join Russia’s new military alliance. If the U.S. and NATO want to act like a bunch of cowards and gang up on Russia then Russia has all the right to form its own military coalition.

Mongolia is with Russia and China too I hope

We cannot even differentiate between men and women, the Y gene is never in a real woman and men always have a y gene. Its ususally pretty obvious though apart from those with genetic abrormalities and those on hormones.

The Nazis should stop using their outdated and inferior air defense systems (they dont have any useful at the moment), because by using them, more collateral destruction and more deaths occur. So, accept your faith and dont react when military targets are being neutralized.

Russia also need to destroy ALL those AA systems. I not understand why this wasn’t done until now !

Smell of burnt orcranian in the evening is okay though.

Are medical centres shut at night? Perhaps that would have been a better time to strike?

no but probably less people and it is hard to make sure all the nazis are at one place so you have to time it right and not miss an oppurtunity that might not come again and not let them progress.

Russia should double-tap the targets like the American criminals do. Kill em all!

Vinnytsia and all of West Ukraine should be wiped off the map. Civilians too.

This city is located in far western Ukraine along with the Nazi factions and the people who love Nazis. All I can say is, “You reap what you sow, bitches!”

The Ukrainian regime has absolutely NO right to whine about “civilians getting killed in Russian bombings” – they themselves are DELIBERATELY TARGETING civilians EVERY SINGLE DAY.

It would be great Karma if the mother with the child that was killed was one of the teenaged female whores from Vinnytsia during the Odessa Massacre in 2014 that were making Molotov cocktails in the middle of the street to give to neonazi guys to throw at the Prof Soyuz building and burn children elderly women and everybody else within the confines. If so, I wouldn’t feel bad at all.

They also choked an 8 to 9 month pregnant female worker on the top floor of that government building with an extension cord and she was found lying on top of her desk during the Odessa Massacre. There was a picture on StormCloudsGathering on YouTube and also a video of a woman screaming on the fourth floor then silence and Neo nazis opening up the windows smiling while waving their crappy ukro flag.

Yes i remember that horror,i hope one dy those bastards are tracked down and dealt with,the Russians and DPR already have the name of the right sector animal who was in charge.

Ukraine should know by now that there will be civi casualties if they shoot down missiles over cities.

I just read on Sputnik that a meeting between UKe air force personnel and foreign military arms merchants was being conducted in that building when it was hit. Hope so…

Updated. On the afternoon of July 15, the Ministry of Defense of the Russian Federation officially announced: on July 13, high-precision Kalibr missiles were an unexpected strike on the garrison officers in Vinnitsa – at that moment a meeting of the command of the Ukrainian Air Force was held with the release of foreign weapons. At a meeting of negotiations on the transfer of funds by the Ukrainian military on the next flight and the organization of the repair of the Ukrainian air fleet. As a result of the strike, the participants were withdrawn.

Now they can experience what the people of the Dombass have been experiencing for the past 8 years.

@0:42 , Normally a kid this injured, he would be screaming in pain. he was added to the video to make it more dramatic.

Great, hope they killed lots of Nazis and western Neocons