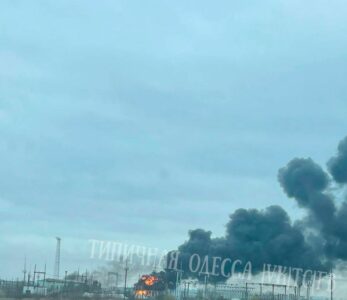 Air alert is sounding in all regions of Ukraine. After more than two weeks after the latest Russian strikes in Ukraine, Russian missiles resumed their attacks on December 5.

According to the Ukrainian authorities, Russian missiles have been hitting at Ukrainian military and infrastructure facilities for more than an hour. Immediately after the first strikes, the “second wave” of missile attacks was declared.

So far, at least six explosions have been reported by the local residents in the Kiev region, at least five explosions were reported in Nikolaev and Odessa, where the substation is currently burning.

Russian missiles hit their targets in:

Despite the threats from the SBU, residents of Ukraine continue to publish footage of Russian strikes, confirming that Ukrainian air defense is absolutely useless in countering Russian missiles.

The attack in Odessa likely hit the Odessa CHPP which is a combined heat and power plant located on the city outskirts. this is the most powerful electric generating enterprise in the region.

The main targets of the attacks were the Ukrainian energy infrastructure facilities. Emergency shutdowns continue in different regions throughout the country. There is no electricity in the Sumy, Mykolaiv regions, partial blackout was reported in the Kharkiv, Zhytomyr, Odessa regions. Problems with water supply were reported in Zaporozhy, Zhytomyr, Odessa, Sumy regions. In addition, due to problems with electricity, there are serious delays of trains throughout the country. The Internet was almost cut off in Sumy, Odessa and Zhytomyr.

The freezing weather has already come to almost all regions of Ukraine. for example, in Odessa, the temperature is almost 0 now, and it will be about the same until Wednesday. In these conditions, stopping the water supply will lead to accidents and difficulties when restarting the system.

There were also power outages in Moldova. Power outages began in the capital of the republic.

Now that Ukraine has kamikaze drones capable of 1000km range it’s time to take the fight to Moscow. Seriously, pummel the Kremlin in broad daylight. 9 months of bombing Kiev is enough.

EU must not be USA slave
Reply to  John

An assault of Moscow with Zelensky leading the charge might work as well.

John
Reply to  EU must not be USA slave

Well the attack on the airbase with the T-95’s worked out very well and the airbase is 400km from Moscow. Why not attack the decision making places of Russia?

EU must not be USA slave
Reply to  John

I am sure the decision centers of Russia are easy to locate 🤣😂 After all, Russia is a small country, almost as large as The Vatican, where could they hide anyway?!

Any saboteur with a cheap drone could bomb anything everywhere in the Internet era. GPS, 3D printer and a handmade explosive and you could bomb anything from a 3 km distance. But to delete entire ukroshit bandera shithole energy grid, only Kalibr and Kinzhal can, motha fucker !

Why are you angry my Romanian whore? I will spank dat ass and meat slap you if you dont behave, ok?

It’s that simple huh? Why aren’t you the defense minister of Ukraine?

Would take some thought. You would need American SAR data to map out the air defense and route a path to the capital along with some nap of the earth flying. INS should be good enough to hit a target that size after you enter the Moscow GPS jamming area.

America is defeated
Reply to  John

Dude, you choosed the wrong site to send your delusional BS

Dude Russia is finished , and will never amount to anything ever again LOL, your wasteland will be divided up into little rouge shittholes soon enough POS.

Ihor, there is a whole lot less “Ukraine” today than there was in 2014. How many millions have fled the failed Ukrainian CIA project since the coup?

At least 7 to ten million left, and that excludes the 6 million in the secessionist provinces. And so the population is probably less than 30 million and declining.

And over a million of those refugees are needle-using cheap-rate whores infested with HIV and diptheria. Bad product at any price, condom not protection enough from Banderite whores.

Zelensky the dog of Nato and Us ! He never think about ucraine people.. he is in the way of nasism and he West ..

On the dick in your faggot ass to Eden.

Instead, show guys sex and the Muslims on SF will give you a lot of upvotes.

NAZICALS This is the word for frozen nazi treats.

I wou’d like to see a massive Russian offensive if condition are good on Christmas day or new years day.

Russia cannot protect its own bases deep inside of the shitthole of mother wasteland EH , we be coming for you.

We waiting for you

Ihor, you really do need to get out of Lwow before the Poles show up.

Yes. Some do not realise that Bandera and the Poles were murdering each other during the 1930’s and 1940’s.

Bandera pandered to the German nazis until they couldn’t stand his pandering any more. Same thing’ll happen with Zelensky.

Ever see those pics of Bandera at Nazi bigwig gatherings? He’s this spindly little guy in the back row trying to weasel his way into the picture. They probably thought he was the butler.

Bandera the Butcher
Reply to  Clyde

I think he’ll be OK unless they’re carrying pitchforks and yelling ‘Revenge is sweet, kasimir – start with the kids”.

Do you remember some years ago a 50 $ inflatable raft crashing into a US navy destroyer punching a 10 feet diameter hole somewhere in Gulf of Oman, fascist cock sucker piece of shit ?

Well, a few people died. Material damage only. No major disruption to military operations. Theissile style drones were flying low and were most likely guided with American satellite navigation, meaning the USA was directly involved. Overall a very expensive strike involving a lot of planning yet with very minimal results for Kiev. Russia on the other hand can now increase strikes due to the territory of Russia coming under fire again. Similar to what happened after the Crimea bridge failure. After the power grid is destroyed, leadership institutions will be next, taking out offices of military leadership first.

That’s exactly what I wanted to say. At 0% electric power, the next in line will be oblasts military HQ’s and/or the cellular communication towers.

The good thing about today’s bombing is the fact that it hit the facilities when the people are working in full swing. So the damage was maximal.

Here is a clip of todays bombing!

Good thing then that quick draw zelensky shot down 130% of all the missiles. Could’ve been a lot worse.

Pulling the triggers on the Ukroniggers!

You know what we do with terrorists, dont you?

Britain is a terrorist country. They stroke Ns1 NS2 and even the Crimean bridge. So it has to be a retaliation against the UK.

Brittle Britain
Reply to  You know what we do with terrorists, dont you?

Their economy is collapsing. It’s good for starters anyway.

If you think what is happening with British economy is a ‘collapse’ how would you describe Russian economy? Britain is rich and prosperous with fantastic infrastructure, housing, health service and education – no crisis would change that (Brits love to criticise everything around and mostly own government because they can) – as for majority of russia and degenerated russians living in third world conditions… go figure

Crap it’s like 10°F. I wonder how they gonna sleep in Kharkiv.

Very carefully is my guess.

Rather think about the russian soldiers freezing to death 🤣🤣🤣

They won’t. They have enough warm clothes now for their front lines in addition to electric generators for their areas of control. Head russian Bunkers can afford to have heating in them as well. Ukrainians forcing to use fires for warmth and suffocating from smoke inhalation.

I read in the Azov Training Manual that shooting your trench mate and cuddling up for the night on top of him will give you a few hours of body warmth anyway but only if the trench is dry.

Don’t believe me? it’s on line in the dark net, next to the javelins. $20 bucks (javelins are more)

Cry me a river
Reply to  Assad Defeated Zionists

Gotta cut down more trees & stick em in the stove, then open the windows to let the smoke out. Might as well make some smoked bacon while they’re at it.

This exactly the way Ukraine likes it.

Weak Russians can only hit civilian infrastructure, it’s the best proof that they are badly losing 😂😂😂

We’re into year eight of the ATO to clear the Moskals out of Donbas. During the ATO millions of former Ukrainian citizens have become Russians, and tens of thousands of square km of territory that was Ukrainian has become Russian. Is that proof that the failed Ukrainian CIA project is winning?

Cry me a river
Reply to  Clyde

And NATO never got to put up their new drapes in Crimea HQ. I wonder, did they ever get a refund?

Russia needs to put it’s world-wide nuclear forces on alert to ensure the fahclsts of the west knows that it means business.

Then it needs to hit across uKRAPistan with tactical nuclear missiles.

we should all thank the British stooge Obama for starting this war. He served his ‘Queen’ well just as previous US presidents did in Vietnam, Somalia, Afghanistan, Iraq, Yémen, Syria, the list goes on including the 09/11/01 attacks.

Hitting energy facilities is a war crime, right? Why are you so proud of it?