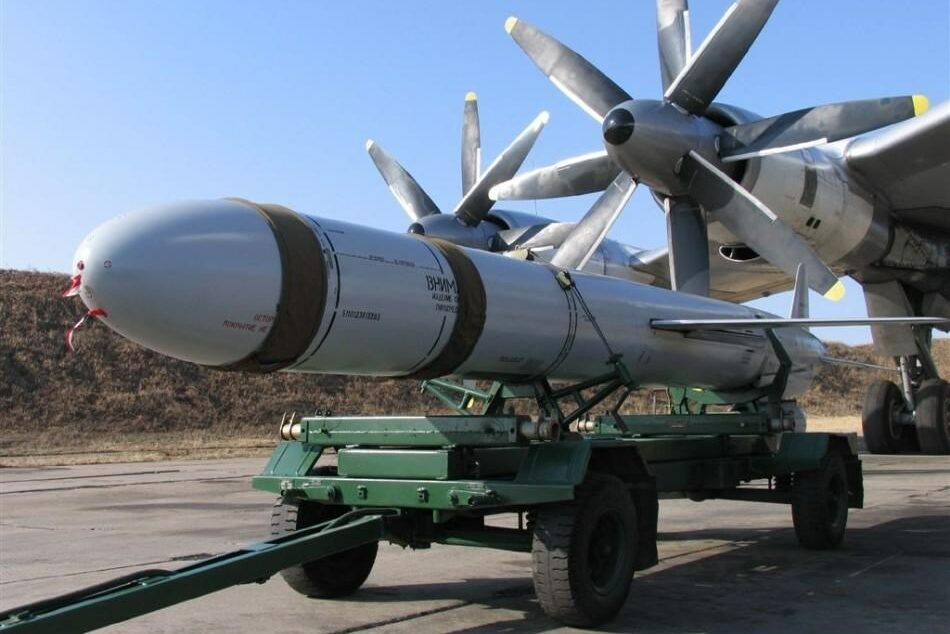 An illustrative image of a Kh-55 cruise missile. Via deagel.com

The basic version of the Kh-55, which was produced in the 1980s and has a range of up to 2,500 kilometers, was apparently selected for the use as decoys. For this propose, the active warhead was replaced with an inert one that was designed for use in tests and exercises.

At least one Kh-55 decoy was used during the November 17 Russian missile strike on Ukraine. The decoy managed to trick Ukrainian air defenses. It was reportedly shot down over the capital, Kiev, where several targets were hit by active cruise missiles.

At the time, Ukrainian media boasted about successfully downing a Russian cruise missile with a Norwegian-made NASAMS air-defense system. However, a photo of the wreckage that surfaced online on November 18 showed an inert warhead, confirming that what was shot down was just a Kh-55 decoy. 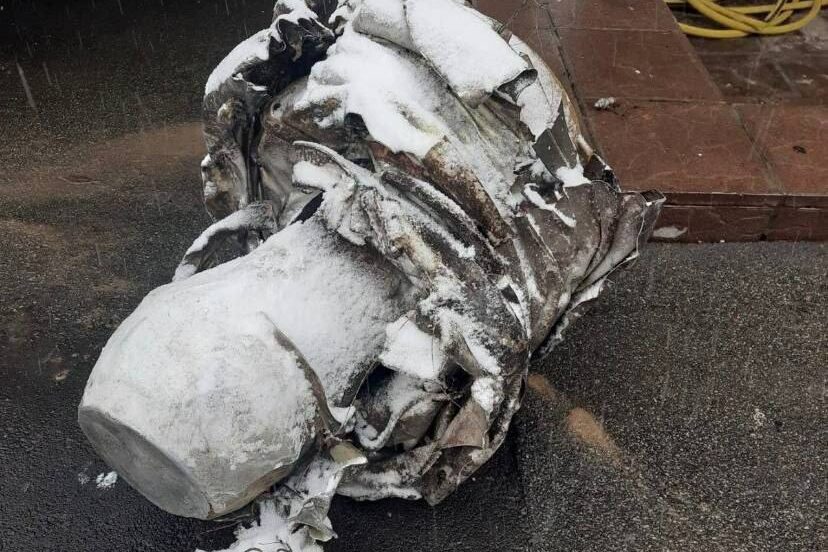 The Russian military has been using a variety of aerial decoys to trick and test Ukrainian air defenses since the beginning of its special operation in the country.

Aerial decoys are not only used to deplete enemy air defenses, but also to help locate, identify and target them along with other means as a part of what is known as Suppression of Enemy Air Defense (SEAD) operations.

The long range of the Kh-55 and its ability to fly at low and high altitudes and maneuver makes it very suitable for the use as decoy during large-scale missile strikes on Ukraine. Furthermore, the Russian military inherited a large number of these missiles from the Soviet Union, many of them likely passed their service life. Thus, using these missiles as decoys is resourceful decision.

Russia’s use of advanced decoys will further add to the problems of Ukrainian air defenses, who remain largely ineffective even after all the support provided by the West.

It is very enterprising of the Russians but it is not surprising at all.

Better keep these tests as a secret.. and continue doing so depleting the air defenses

It’s not a secret … decoys have been used forever, all military forces use them and the Russians publish decoys in their list of missiles capabilities.

Here is a humorous example from WW2.

The Nazi’s set fake wooden planes, to have the Allies waste resources on them. Allies caught wind of that, and yes, they did perform bombing run on that location.

But, the only bombs dropped were wooden bombs that are normally used as training aids.

The Real Hague
Reply to  HAT451

Here’s a not so humorous example from the Kosovo war. Serbs scattered inflatable tanks across the landscape and NATO kept bombing them, then finally figured out they were decoys and decided they’d show those Serbs and started bombing civilian targets instead.

none
Reply to  The Real Hague

They were bombing civilian targets regardless Real.

I tricked putin into fighting for BRICS against NATO, but putin is such a pussy that he can only pick on the small guy (like isis or Ukraine).

Now I can step back and chill, while NATO undergoes Nazification, to exterminate commie slavs, and defend Ukraine which supports Palestine.

putin is such a pussy that he cant even deny apologizing to satanyahu.

*I never expected putin to come out as a jew loving anti Nazi, but since pavlov mentioned it, then fine, putin can die as a jew lover.

In Iran there was discussion that one option is to target oil supply, but that was just as a last resort.

Instead its now the first resort, and asshead even said he would use chemical weapons on his enemies.

So if you fight dirty you die dirty.

Universal Protocals stipulate using the Book of The Jews against the jews.

And likewise Iran will be accused of being yazid and fighting in sufyanis army.

The Moses Protocal is the extermination of traitors in Moses Camp.

In The World Camp its the same thing, except its like Moses being in The Clouds.

This Protocal is a simple mulitple choice question, with Dire Consequences.

For example phaggots are not allowed in Moses Camp, therefore satanyahu is exposed.

And satanyahu has a land line to poo tin.

Your mother never expected you to live either.. shit happens.

don’t bother with the troll, It is a typical dad did his deed against the wall and the flies did the rest.

Its actually true. Putin uses the bible quote that says if you get slapped give them the other cheek. Then again if Putin didn’t give the other cheek it would be ww3

Ultrafart the brave
Reply to  JHK

My goodness, what a twisted web you weave!

How does the senile child-groping pedophile currently fronting the White House factor into all of this?

JHK
Reply to  Ultrafart the brave

Eminem stated clearly about the meaning of faggots, faggots still have Rights as Humans, however a phaggot is not Human, aka a phaggot is a subhuman, aka an ubermensch, as clearly stated in Third Reich Nazi Teutonic Protocals of Jesus Christ Of NaziWrath, aka Al-Kamikaze.

ZZZ
Reply to  Ultrafart the brave

JHK is her clone

Why open your mouth when you have nothing intelligent to add. You see what happened freind Joe19 or what ever the hell it is, had a complete mental break down while posting and now he’s band.

Nobody supports Palestine except for Russia, Syria, Lebanon and Iran. Stop lying to yourself you coward.

Nah i take any Lebanese over any Israeli. If you think scammer, they are the first in mind then the Indians & Nigerians.

*note: I am not saying all of them are scammers but they are statistically over represented.

What sort of ‘trick’ was it? Answer is simple: Russists run out of missiles so they have to use nuclear rockets. Iran after hit by Israel is also unable to deliver any more kamikaze drones. Not to mention the fact that russists have no more dollars and are unable to purchase anything…

Then why to use a dummy warhead?

The clown thought one was Santa Clause on his way to Europe’s children and wasted many missiles on that one.

What’s happening with Russians? They keep retreating from the East side of the Dnepr and the kill ratio is 1 to 10 in western media and 1 to 5 in russian media meaning for one killed Ukrainian, 5 to 10 Russians are killed.

One of the news report from technology.org about this incident was that the missile carried a dummy nuclear warhead.

Would that be considered a veiled threat at the largely NATO participation in this war (now that most of Ukrainian local forces have been decimated)?

Remember the stealth plane shot down over Serbia ! NATO and the west are nothing but a house of lies.

Oh no! One whole plane was lost. I’ll call the Air Force right now and tell them just to scrap the remaining 3,500 attack aircraft we have left.

S400 will scrap them easily for you.

Unless of course they fly in around Kherson. Then the Russians will have to withdraw again.

Is going to be a very, very cold winter for Ukraine, if I were Ukrainian I’d start moving West ASAP.

Muslims, Br0wnies,Negros,irans, indians, Pakistans, Asians now i explaining you how to run Germany 1. Serbia has no visa policy. No visa needed to enter. 2. With a plane fly to Serbia. 3.Enter to Germany from Serbia.

DONT FORGET SAY THANKS TO ME..

Why not put a warhead on it anyway? Oh that’s right. I think like a nasty jerk while the Russians don’t want to take chances and kill innocent people. It’s also smart of Russia to use up all the old inventory with expiring date codes.

Russia has used various decoys since the start of the SMO. Ukraine shoot down some VM-V helicopter decoy targets during the spring 2022, they were also used to find and destroy air defenses.

They should strap BoJo on one with his suspenders and ride it, like a Limey cowboy waving his Union Jackoff hat.

These old missiles are still quite effective, especially at low altitude. Maybe they should go back into production. The old chips needed would be easy to make by Russia and China.

Stupeed Ru could have long used its tens thousands obsolete old planes and missiles to overwhelm USNato air defense before sending in its RuAF.

That was how Azerbaijan paralyzed Armenia air defense, searched and destroyed SAM until Armenia dared not activate its air defense. But a dozens USNato anti radar missiles have turned stupeed Ru air defense to Armenia instead. Also how Turkey’s TB2 drones becoming game changer in low tech war like Ru VS Ukraine, yet antique Ru doesn’t learn the lesson.

Why use a decoy when Soviet’s abundant expired explosive can be used as warheads to inflict extra damage? It proves Ru is not just stupeed but also running into grave supply trouble. Most of Soviet’s stockpiles could have already been stolen by corrupted ones sold to ISIS for killing Russians in Syria.