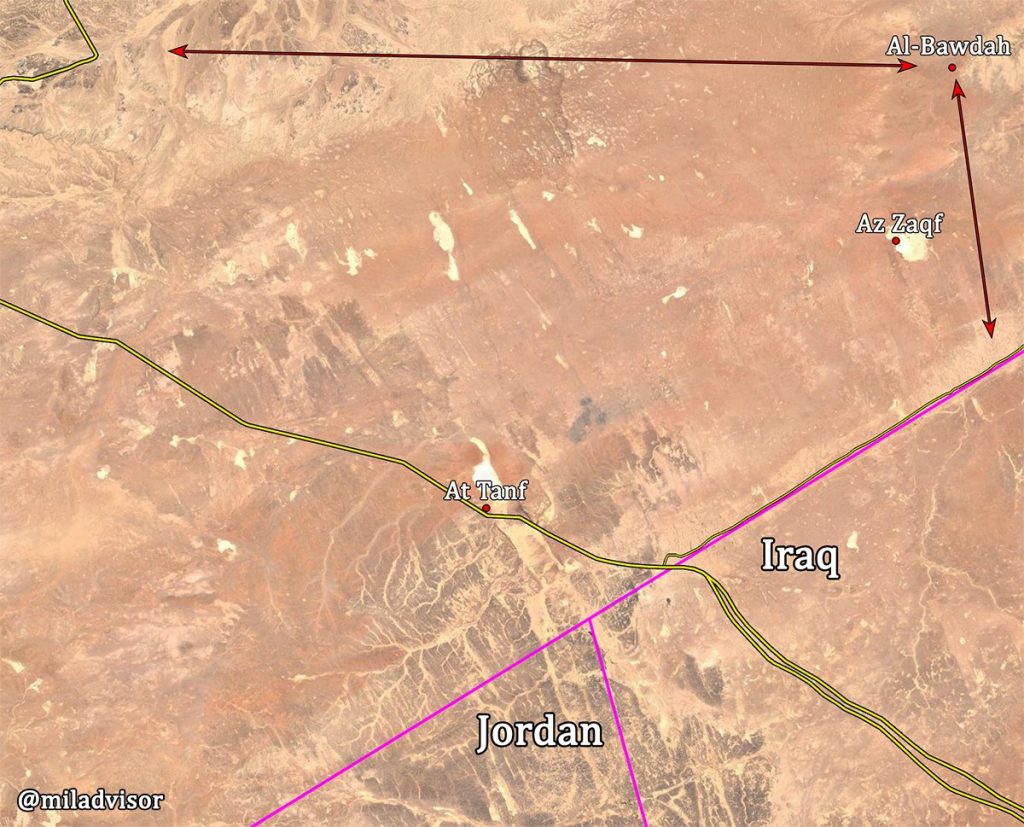 According to the Russian Ministry of Defense, the Syrian Arab Army (SAA) managed to reach the Syrian-Iraqi border after a fast advane in the southeastern desert.

The SAA also captured a desert road north of Al-Tanf and areas under the US-led coalition and the Free Syrian Army (FSA) control. According to the map released by the Russian military, government forces took control of the area near al-Bawdah.

It is believed that the Russian Special Operations Forces may have participated in the operation alongside the SAA. Moreover, there have been unconfirmed reports of the deployment of Russian Army forces on the road to prevent the US-led coalition from attacking the SAA.

The Hezbollah media wing has also confirmed the gains at the border with Iraq.

With this advance, SAA has returned to the Syrian-Iraqi border for the first time in three years. The SAA had lost the Baghdad-Damascus road after ISIS attack on Al-Tanf in 2014.

The SAA next target may be Al-Qa’am border crossing on the Syrian-Iraqi border. The possible operation towards Qa’am may be a joint joint effort of the SAA and the Irai Popular Mobilization Units.

Brilliant! We’ve been waiting for this! Lets hope the SAA can further their presence

The Iraqi side of this border is still Isis territory. The SAA has not yet linked up with the Iraqi army, the west still has options.

From what i see if the news and maps are correct, they have linked.

That’s not a new one but there’s a “but.” Actually US is treading very murky waters here (sorry for my English). They decided to use their last option (Kurds) in a direct confrontation with SAA. Now lets wait and see how Erdogan changes his stance against Assad (He’s fear and hate towards Kurds is far deeper than towards Assad) and the result of this “brilliantly planned” US/Israel/NWO operation is that instead of applying more pressure/introducing one more anti Assad force, US is managing to release pressure i.e. loosing completely one of main contributors of anti Assad coalition – Turkey. When Putin saved Erdogan’s ass (giving him last minute intel on US instigated cope) from US replacing him with another “Sultan” it’s like an older man teaching an arrogant young man good manners, like saying to him “You can keep being US/NWO vassal country or you can join nations that (at list try to) stand for their sovereignity – India, China etc.”

We’re not talking long distances here, nor is the terrain a natural obstacle. A surprise maneuver like this is possible. There isn’t reason to doubt this as a hoax.

WHAT A NICE SURPRISE !! Maybe FSA trash was to busy screwing with SAA to the west (op Desert Volcano), and forgot to secure their road network to the east. HAHA

you welcomed the FSA and americans. big liar!!

Or maybe they didn’t know about the desert back country and road. They are, after all, fighting indigenous forces on foreign soil.

Good move, but the question is: will be SAA able to hold the territory?

Now it’s up to the Iraqis to clear the other side of the border and start joint SAA/IA patrols. Whoever attacks then, attacks both countries and it’s allies. The situation would be a first even for US – being allied with Iraq south of the border and enemy north of it. I predict a lot of sleepless nights for MSM shills trying to explain that to US taxpayers. But all that doesn’t matter right now. It’s time to raise the flag… https://uploads.disquscdn.com/images/9b970b03a5b49656a7511226b9a071ebea2b2be4a06b7eee5f27946b2aafca6b.gif

There’s little resistence in the way from the present position to Al Qa’im. That’s because nobody expected that move, and all force of ISIS is gathered in the central plains to avoid the advance towards As Suknah. Furthermore, there is only sand, road and tiny villages separating the two points. Possibly, itf everyting goes well the whole border from Faydat ai Kammunat (where the Russian special forces are now, at the Iraqi border) up to Al’Qaim will be covered in a week or less. The real thing is when they get there. And, to hold such long line of communication.

By other hand, if ISIS tries to attack the supply lines, they will be in the open desert, and could be an easier target for the SAA/Russia.

Should be smooth advances, but lets wait and see. This will also allow SAA connect with PMU and join the forces

I do not think they will rush. They have to dig in and reinforce the defenses to prevent a counterattack from FSA to break the encirclement. I guess that this will be the hardest part, since if they remain traped, it will be “game over” for USA/Arabia/ISIS.

So I belive Syria will consolidate their defense lines before, and only then advance along the Iraqi border.

Now the terrorist motherf**ng Yanks are in shit..Illegal terrorist motherfuckers..They could not fall any lower than this,everyone on this Planet sees them as a Motherfucking Terrorist MotherState..

Fantastic move. It’s a chess board, saa checked the rebels. Next move is game over. When the reinforcement pour in from Iraq, I’ll be surprised to see any way through for the fsa. Russians are there to fend of Americans.

This is the right way! And in the same style from Palmyra diection T3-T2-Abu Kamal. With larger units. safe T3, T2, Abu Kamal and the rest from Kamal northward direction Deir ez Zor. Perhaps with help of PMU.

They’d need to fortify and stock up T3 and T2 and set up dozens of fortified check points all along the road that connects it. Also Iraqis clearing their side of the border from ISIL would prevent SAA from being attacked from both sides along the T3-T2 axis. That move would surprise all the enemies and reduce the pressure on Der Ezzor at least a bit. Only that’d be one complex operation involving a couple of full mech divisions, air cover and CAS operating from Palmira airport or closer and a swarm of surveillance and attack drones to cover the whole 200*600km area of operation. I wonder if there are enough resources available to pull that off…

My opinion is that, to take abu kamal. this is the goal. it is not important to make chekcpoints everywhere. only t3, t3, mayba also specnaz and syrian paratroopers and marines. importatnt is to gat abu kamal and the contact to iraq. in palmyra shold be witing 15 000 soldiers for big offensive. 5000 is enough for abu kamal. 10 000 can attack in direction al suknah.

Check points are their to stake the claim and define the front line. Once you start the push due east you don’t want FSA or ISIL wondering around in your rear.

Hrky75, some yet to realise that gaining territory against US/Zio irregular armed forces (ISIS/Queda/FSA/SDF etc) is not the hardest part nor it is the goal. The hardest part and the goal is sustained control over those territoryes. They either don’t understand or just don’t want Assad to do good :). I guess they want Assad to march forward and get it’s forces in what we call “Cauldron”. I assume that Ukro nazi listened to similar advice when yesterday’s miner’s and taxi drivers (with some help of Russian volunteers) succesfully defended Donetsk/Lugansk areas against Ukro nazi regular army and neo nazi batallions. Ukro nazi tasted plenty of what it means to be in “Cauldron” – encircled and eliminated by heavy cross fire.

This loud guy got out-maneuvered.. By the desparate Iranians.. Like a fox in the desert

I guess you can say that the west lied again

Is this their national anthem “Oops! I did it again”(c) ?

https://pbs.twimg.com/media/DB5QYBsXsAA-Com.jpg Are they going to destroy any enemy of the USA? Then they can start with their own government…﻿

Iraqi forces and pmu not gna just let them do that, forget it

And its FREE SYRIAN ARMY they fighting with not Free IRAG/SYRIAN army.

Yah i dint mention fsa but i didnt have to? … i just meant the iraqi army and PMU on the iraqi side of the border will not simply let us/nato/FSA forces in and go straight to abukamal/DEZ from there to skip passing through the SAA held sections in syria. This might get interesting!!!

who are you, little shit? :DDDDD

Better than a big shit like you… u kno who i am tho dont play silly. Good to see fromyour post below you turned positive and stopped talkin shite about saa military strategy. That a boy

Hahaha Does US military have transgender toilets yet ?

Our transgender soldiers are a hell of a lot more honorable than our politicians.

Johnny Boy McCain is done . In yesterday’s questioning he asked Comey 2 times about the investigation into Comey. 3 times he called him President Comey.

Hope he has a stroke.

Guess the pipeline is cancelled…

Especially after they hanged quatar out to dry. ^.^

Congratulations for this excellent advance and smart move against the terrorists! ?

From the Syrian-Iraqi border today, the Syrian Army and their Iraqi brothers send a message to the US occupation forces: “This is our land!”

Very good news. If the Americans are interested in peace, they should hand over al-Zuqf to the Syrians. And if that goes peacefully, they should pull back from al-Tanf to Jordan.

AHHHH That does really GOOD!!! I had never such a deep satisfaction before in this bloody US-War! Now finally the US-Lyers will harvest the fruits of this gambling and proctering…!

Thats a good Idea to hunt all the terrorists from the frontiers and habitated rivers in the middle of the desert. The desert is really empty and in a empty field they will be much more easy to bomb and to liquidate. And with the water there will also some problem…

This is a huge defeat and embarrassment for Saudi Arabia, with their plan to partition Syria and break up the Shia crescent with a Sunni mini state connected to Jordan. The area is now cut off completely.

The Saudi royal family is finished.

Apparently, the decision was made early last month not to invade with 50,000 coalition forces from Jordan during that joint training exercise, under the pretext of fighting ISIS. Apparently H.R. McMaster wanted it, but Steve Bannon was against it. It is now too late.

we can but hope that this will send the Saudi head-choppers round the u-bend of history. ;o)

Good move! As I have said it was not necessary to attack At Tanf and kick the shit out of the troops there. That would have been risky and costly. This is real tactics here, outsmarting and outmanoeuvring your opponents. The advance towards Tanf was probably a feint to get the attention, and it suffered some losses, but the prize is now there for all to see! Jordan border is now largely defunct as a supply source for all except the Daraa/Suweida pockets. I expect that Iraq and Syria will formalise a counterinsurgency union of some kind very soon. That will allow them both to operate in complete legality on both sides of the border to hunt the rats. ISUS will lose the edge of rapid manoeuvres and sudden cross-border concentrations of force. It is a no brainer that more of the border will be liberated in the coming weeks and all the groups will start to feel the squeeze as supplies run out and there’s no more on the way! You might have noticed that this new salient runs right next to the Az Zuqf (spelling?) outpost that was to be another base for the US backed group. I wonder what is happening there? FSA watching SAA tanks roll past? I should think they are all on the run now. The Spetsnaz would have made sure of that.

Well said. Go tell this to that “SAA is shit/Russia is spinless” gang hanging around here :)