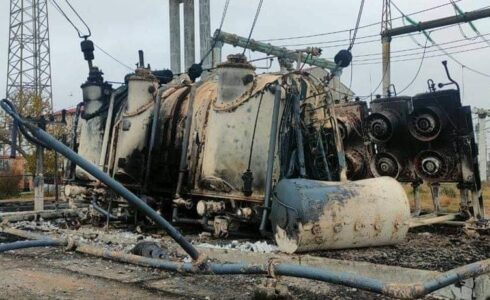 During the Russian withdrawal from from the right bank of the Dnieper River in the Kherson region, the Armed Forces of the Russian Federation destroyed a large energy infrastructure facility that supplied part of the right bank and the Mykolaiv region with electricity.

According to the head of Ukrenergo, the facility was heavily damaged.

“The power facility, which provided power supply to the entire right bank of the Kherson region and a significant part of the Mykolaiv region, was practically destroyed. It doesn’t exist anymore. Two transformers, each weighing 250 tons, are blown up. Relay protection hall, compressor, battery were shot and crushed,” – he claimed.

The Ukrainian official added that Ukraine will have to replace the destroyed equipment with supplies from Western countries.

The Russian side is yet to comment n the issue.

Why would Russia destroy the power system of Russian people? Why did Ukraine do their best to limit civilian damage trying to take a Russian city?

Sure thats why they transformed entire villages into strongholds and should from within or next to civilian buildings. I mean i will not blame them it is the tested way that the british and US are doing war all the time.

why don’t you join the Mickey Mouse club

Because Russian people left for the most part,the ones left are Bandera filth,its called scorched Earth dear boy.

Russia can built a new one because it original made in Russia industry ,but Ukraine can not , Ukraine industry don’t capabilities build a new one ,no Russia peoples in that area ,they already evacuate into Russia lol 😆

Actually, Ukrainian Industrial goods are way more better than anything the Russians can produce – Russia can’t barely build anything useful and have to import everything from the West, or Ukraine 😆😆😆

tell that to the Russian Missiles detroying all that “made in Ukraine” stuff on fire.

Ukraine soldiers and regular US and UK soldiers pretends dressing as Ukraine soldiers have suffer heavy loss of life because human wave cannon fodder tactics,sad US and UK will sell their widows and daughters as prostitute and sex slaves in US and UK lol.

So we won. And why the hell are we destroying our own infrastructure then?

Because RF Military has Einsatzgruppe mindset.

You destroy what you do not plan to keep. Since they did not do it earlier it seems they changed their plan or came to the realisation that the old one will not work.

To destroy facilities that are crucial for civilians is a war crime. Secondly, Russia had no right to be there…even less so to destroy the equipment that legally belongs to Ukraine.

What are you going to do about it Bandera boy?

Me? Very strange question. I am not involved in this cruel war but I think I am entitled to present my view of things just like you. By the way…”Bandera boy”…please grow up!

The first thing the us does in every war is destroy the equipment that is crucial for civilians and legally belongs to the country they are attacking.

Yet i have never heard any one call it a crime or illegal. So it must be ok…

Want support then stop shelling the donbas region, stop attacking and killing anyone who feels “too russian” and if the russians still continue their agression then i will say you are right. Until then. Slava picka materina. Prostitutkama slava.

kotromanic: Could you please specify a source to support your claim that Ukraine “joined” NATO’s military intervention against Serbia? I guess you mean the Kosovo war in 1999?

I wrote a responce and it did not let me post ist.

I can only find a couple information on various sites i do not know. Then there is some mentioning on the english wikipedia that they have withdrawn and had losses there.

I remember watching something about clashes in kosovo where ukrainian soldiers where stationed and wonderen why the hell are they there since i thought they were in the russian camp.

America has no right to places nukes in Ukraine.

Russia is retarded and is going to lose. But it’s all by design and scripted as they are all zionists working toward the same goal.

Now that’s what I call a TOTAL war of denazification !! Good boys russians ! Lesson learned. 1 more question though: why not you sent 3-4 precision GPS shells when Cocalenski and his bandera staff filmed in plain street Kherson ? Would have been a macrodenazification and a good start for JNATO shithole negociations…

Or why not target Ukrainian Generals or Western politicians? This war is about as real as covid was.

The mood in liberated Kherson:

“We have heating, no electricity, no water, no mobile or internet connection, but NO RUSSIANS! I am extremely happy because now we are free.”

Freedom is a lie that all stupid people buy into.

Guess we’ll have to cut the gas then! Why does Ukraine still have gas? Strange tactics for an Army?

Ukranazis will have a long cold winter without electricity, gas and oil. But hey you still have a Clown to warm you up. Does that make sense?

A lot of bombs today in Kiev. But sorry Russia, I have to ask you an important question: why can you not just bomb up the clown? Everybody knows where he lives.

and of course, damage nuclear energy facility close of west border of Ukraine.

Kherson withno power, what a victory for Ukraine 😂

You’re right. That would have required from the start.

If Macron finds out Putin knocked down a couple telephone poles the Russians will have to withdraw a few 100 more kilometers as a gesture of “good will”.

nice keep doing this. no more power for the ukrop traitors.

Well, I guess the back to general winter for the Ukronazis and it’s Natostan henchmen. Seems the Russians are about saving lives of their own, instead of using them for Canon fodder. Something we all know Ukronazis and Natostan excel at. Throwing their own into the meat grinder. Got to love the UN and it’s hypocrisy towards Russian reparations! Ya, after the countless countries and millions of killings perpetrated by the USA and NATOSTAN all over the world 🌎. What an abomination the UN is.

UN must to be dissolved; obviously it became gradually from its birth a tool of deep state americunt imperialism.

The Ukrainians had better check all the power lines also (at peek power.. LoL)

Dear nazi-fascist ukranian, you are at war with Russia, aren’t you ? So, what is the point ? , lover of the madness and lies.

That was Russian property anyway, if Ukronazis want electricity they should make it themselves instead of using Russian infrastructure.

“The Ukrainian official added that Ukraine will have to replace the destroyed equipment with supplies from Western countries.”

The Russians will just have to blast those too, I guess.

Hey, the rules of the rules-based order require it. Now, as Elon the Felon says: “Deal with it”.

AntoninArtaud
Reply to  Orders are Orders

Russian runaway there tail between their legs.russki loosing faster than ever