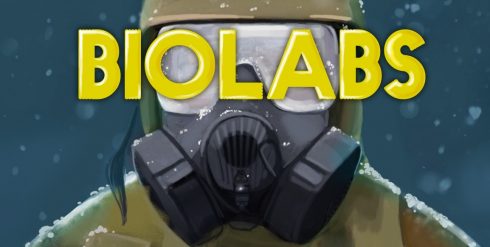 The Russian military special operation in Ukraine coincided with the planned launch of U.S. military biolaboratories in Kiev and Odessa. On February 26, the US Embassy in Ukraine rushed to delete all documents about 11 Pentagon-funded bio-laboratories in Ukraine from its website. All these documents (now deleted by the Embassy), you can read HERE.

In October 2021, the U.S. Defense Threat Reduction Agency (DTRA) of the U.S. Department of Defense published on the U.S. government procurement website an additional agreement on “combating highly dangerous pathogens. The document concerns the final stage of work on the launch of two bio-laboratories in Ukraine: in Kiev and Odessa. The additional agreement covers the equipping and training of personnel and commissioning of the facilities. The cost of the work is 3.6 million dollars, but some figures in the document are hidden for reasons of secrecy. According to the document, the laboratories were more than 90 per cent ready. However, the projects’ completion was delayed up to seven months from the date of signing the document (July 2021), thus to the end of February 2022: 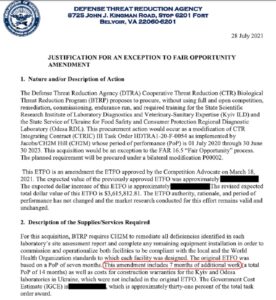 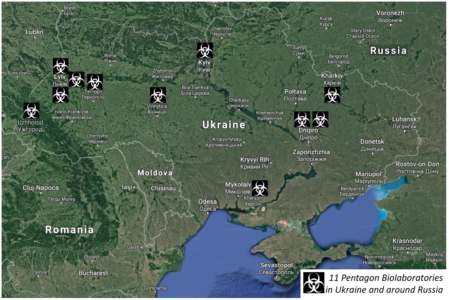 You can read more on the U.S. bio-laboratories, including in Ukraine: HERE, HERE, HERE.

Two new laboratories are being created on the basis of the Kiev State Research Institute for Laboratory Diagnostics and Veterinary and Sanitary Expertise and the Odessa division of the State Service of Ukraine for Food Safety and Consumer Protection. The main part of the Ukrainian collection of endemic strains of dangerous disease agents is stored in Odessa. The buildings of the new biolaboratories in Kiev and Odessa were built back in 2019, but were not put into operation.

The document above notice makes it clear that this project is important and urgent for the U.S. government: further potential delays are called unacceptable, and “DTRA requires the urgent completion and surrender of both laboratories to ensure the active and safe execution of the DTRA mission.”

Both facilities are owned and secured by the Government of Ukraine, but neither facility is currently performing active biological work because DTRA has asked the Ukrainian authorities not to begin work until acceptance and completion is complete, the procurement materials said.

Moscow has claimed its concern over the developing biological weapons near Russia’s borders. Russian President Vladimir Putin worried about the “purposeful and professional” collection of biomaterials of Russians by foreigners.

The on-going Russian military operation in Ukraine may stop the DTRA program in Ukraine. Anyway, the projects in Kiev and Odessa will be postponed if not cancelled. The U.S. has already spent over 2 billion dollars on such programs in Ukraine alone, and there are more in Georgia, Kazakhstan, Armenia, Azerbaijan and Uzbekistan.

Now, as Russian forces  are advancing in Ukraine, Kiev seems to be in a rush to hide the evidence that the USA violates the convention on non-proliferation of biological weapons. The end of the Russian operation will show.

Effing USA government up to it’s underhanded tricks again it would appear. Let’s see what comes to light when the main military assault is over.

Get ready to suffocate on your own blood Ameriwh*res after you’ve had a Chechen or Cossack blade slice your throat from ear to ear. Well deserved for your nefarious deeds against Russia.

Remember, it’s not the American people, it’s that effing Cee U N Tea Biden and his government that’s the whore.

More like every US admin since Kennedy and especially since our own actor/president, CIA/president.

Yahweh is a tranny
Reply to  zman

Lyndon Baines Johnson was the first (?) jewish president. His grandmother, Ruth Ament Huffman was jewish. His mother, Rebekah Baines was jewish. Therefore, Lyndon was jewish by descent according to jewish law.

Trump was captured by the Rothschilds due to his numerous bailouts. Chabad jews captured him when he pimped out his daughter to Jared and with blackmail through Epstein’s fantasy pedo-island.

We Americans are being ruled by the corrupt government. I am good person. I feel awful for you.

It is likely that NATO won’t survive after Russian operation. Ukraine is a second largest country in europe and that itself amounts to some decent war depth. With that said, it didn’t take long for RF to be well in the process of the complete control of Ukraine. That is impressive display by RF military. Wonder how long small countries like Germany, Britain, etc can withstand RF military in an unlikely event this goes hot.

Considering that Ukraine puppet government even declared having a better army than some NATO members says a lot too. They either lied or NATO is in big trouble. But it doesn’t look good for them anyway. First wave was a blow to Ukraine and NATO as well. NATO has a lot to loose now. All that defense talk and they not ready to step in when it comes to Ukraine? They stepped in elsewhere, you know, like Libya, Irak or Afghanistan for example. So what’s the problem now?

Skripal where are you? You were such nice cover distraction for nato crime.

puppets in taiwan are shitting on their collective pants while looking at ukraine being completely eliminated.

Blaze
Reply to  divide and rule

I was wondering what is really going on in Taiwan.. especially as a few months ago Russia and China asked the UN to investigate the biolabs on their borders that are run by the US! Of course the UN denied. Seems Xi may be a white hat and about to clean Taiwan

Why are Russia so nice to this people, they are criminals against humanity, send them some boms ful of some nice illnesses !

I’m somewhat off topic with this nightmare scenario that flashed into my head at dinner. What If !!! The Anglo-Yanki Empire have been planning for this attack too??? The reason I’m posing this question is there has been little positive news coming out of Ukraine today. Over the past few years we have been observing the AAE disintegrating and with their shambolic escape and utter defeat from Afghanistan underlining their military impotence on the one hand combined with their Economic flatline revealing the advent of the walking dead zombie economy still capable of surviving by sucking the life out of Allied Economies, Japan and the EU we just might have missed Their Biggest Plan for the Century. The complete destruction of Russia. We are all aware that this was “The Plan”, however, it became inconceivable that their narcissistic arrogance and bumbling ineptitude could do little more than hasten their exit from the world theatre where applause and fanfare drowned out the death rattle of its gurgling grasps and groans. What If… all of the above was the backdrop to coax Russia into a killing field. Where their carefully laid plans have been constructed over the past 6/7 years. Underground analog communications systems, carefully built and concealed launch platforms for MLRS, Tanks, SPHs and APCs 10,000 highly trained and committed troops to emerge a day after the collapse of the first line of defence.And how do you trigger this to happen when you want it to??? You get Ze to talk about getting his own Nukes. Hope this really bad nightmare remains unfulfilled

So many times in the past the US/NATO have pushed Russia and Putin has always retreated. I think the plan was to shell the independent regions and while doing so sneak in some nuclear capable weapons. But instead, Surprise!!! What is that saying, everyone has a plan until they get punched in the mouth :)

Yeah, Biolabs are certainly a problem, as was seen at the end of 2019. To put it bluntly, there has been (for some time, now) a collaborative endeavour among the world powers (namely those under the nuclear umbrella) to research and stockpile biological weapons (research into infectious disease, and the isolation, catalogueing, and storage, of whatever microbiological organisms could cause such diseases). Storeage and delivery systems of a reliable nature are more than half a century old. It is forbidden weapons technology, frankly. Serious ‘No, No’ territory. All of these facilities must be removed.

The plan was a US plan to install nuclear capable weapons in Ukraine. The problem for the US is that Russia did not like the Plan :)

I think the Russians also may have had an opportunity to inspect the US labs in Kazakhstan during the recent upheaval back in January.

My thought is I do not know who is telling the truth in any media today. This is sad.

I’m sitting here laughing at all of you. This is not about one country or any BS like that this is about the Global Cabal that is disguised within the WEF. These group of elitist are within every country. They are of every race and religious demographic. They are the ones pulling the strings. The Bio Labs were part of the great reset which Bill Gates is apart of with his desire to reduce the global population by 75%. He said the quiet part out loud a week before the “military action”. He said there will be another pandemic “soon”. Ukraine has been a global hot spot for money laundering and funneling illegal transactions. Taiwan is a hot spot for child trafficking along with Belarus which is Ukraines northern neighbor. Russia has been safe guarding its funds by buying gold and silver, the US was doing the same thing under Trump. I believe Trump, Putin and Xi were working together to expose these globalist and remove them from the world. As all three men hate the WEF/NWO globalist.