Russian Military guarantees preservation of life and safety of terrorists, laid down their arms, in the suburbs of Damascus. 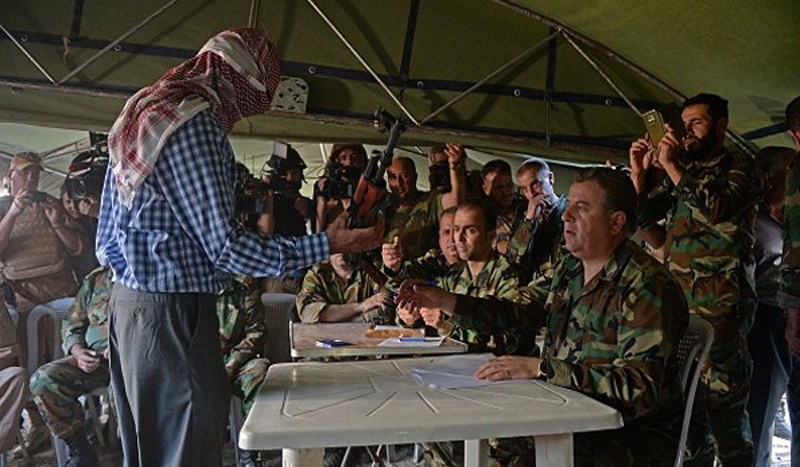 Russia’s coordination centre for reconciliation of opposing sides on the territory of the Syrian Arab Republic guarantees safety of terrorists, laid down their arms, in the suburbs of Damascus.

Russian military guarantees preservation of life and safety of terrorists from the town of Muadamiya, who joined to the truce in Syria. The Russian side monitors observance of the obligations and guarantees anonymity of intermediaries.

On Friday, a group of 123 terrorists freely left Muadamiya, located south of Damascus. The terrorists confirmed that no one of their 1,200 accomplices, who left the town, was arrested or killed.

It should be noted that the offer does not apply to the Jabhat Fateh al-Sham (previously known as the Al-Nusra Front), the Ahrar ash-Sham and the Islamic State (IS) terrorist groups.

Meanwhile, on Friday, the Russian Defense Ministry said that a refusal of the US authorities to accept the elimination of one of the IS leaders in Syria, Abu Mohammed al-Adnani, shows that Washington does not control the situation in the region. The statement was made on its official page on Facebook.

According to officials of the military department, it is not surprising that the Pentagon considered the news on the elimination of Abu Mohammad al-Adnani by the Russian Airspace Forces as a ‘joke’, as the US refused to coordinate its actions in Syria with Russia and to share information a year ago.

We don’t want safety for them. Starve them out, blow them out, and when they run out, give them the same they have given to the Syrian people. Drop leaflets upon them telling them their is no surrender, and they will soon reap what they have spent years sowing. They now stand to take what they have dished out to so many innocent. Let them be consumed by their own flames which they themselves have ignited. Amen. http://en.farsnews.com/Default.aspx