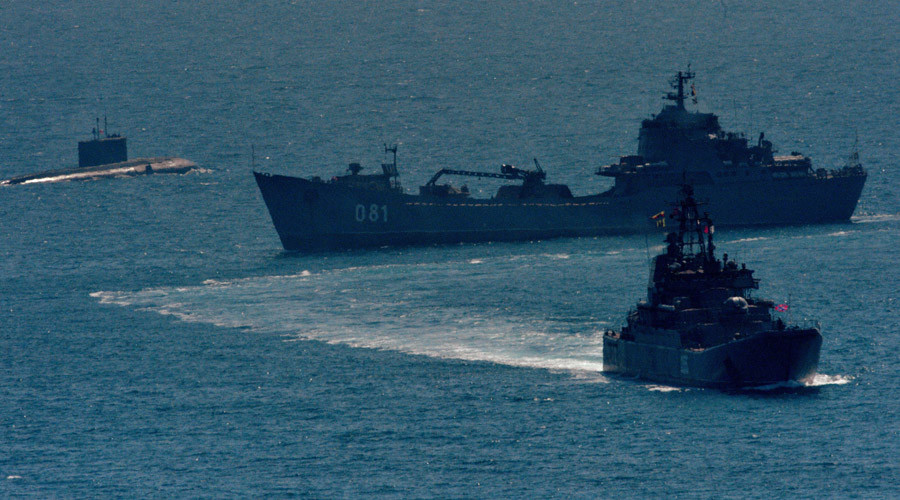 Russia might soon open a new naval base for its Pacific Fleet on one of the islands in the Kuril chain. A special military and geological commission is now assessing the infrastructure potential of Matua island, which Japan has also laid claims to.

Some 200 members of the joint expedition by the Russian Ministry of Defence and the Russian Geographical Society are currently on Matua reviewing the state of infrastructure on the abandoned Soviet military base there.

“The main goal of the expedition is to study the possibility of basing Pacific Fleet forces there,” commander of the Eastern Military District, Colonel-General Sergey Surovikin said at a meeting with the district’s senior commanders.

The expedition forces have built a mobile camp on Matua and are assessing three wartime runways to estimate the condition of the airfield and prospects of restoring them.

During World War II, the volcanic island near the center of the Kuril Islands chain in the Sea of Okhotsk belonged to Japan and was called Matsuwa. The island had a number of airstrips and was garrisoned by up to 8,000 men, who surrendered without resistance during the last weeks of the war.

The Soviet Union claimed sovereignty of the island and stationed a small contingent on Japanese-built military infrastructure. Last of Russian military forces left the currently uninhabited islet more than a decade ago.

However now, the commander stressed, the entire Far East including the chain of the disputed islands is becoming vital for national security. To reinforce this “outpost” of Russia, Surovikin said that the Eastern Military District will be provided with some 700 units of military equipment and weaponry in 2016.

“In order to stave off any, even minimal, threats, unprecedented steps are being taken by the Russian leadership and the Defense Ministry aimed at developing military infrastructure, planned rearmament of military units, and enhanced social protection of all military personnel and their families,” the commander noted.

The rearmament plan also includes 60 new aircraft and helicopters, in addition to three vessels and over 20 drones. Furthermore an extra 22,000 contract troops have been deployed in Russia’s Far East over the past year, now totaling 65,000 people, Surovikin said.

In late March the Russian Defense Minister Sergey Shoigu said that the Kuril Island naval base would be developed along with Russian Arctic bases. Setting up new bases or revitalizing old ones is being carried out within the framework of the Defense Ministry program until 2020 aimed for improvement of the composition of forces stationed in the Arctic and the Far East areas.

“The planned rearmament of contingents and military bases on Kuril islands is under way. Already this year they will get Bal and Bastion coastal missile systems as well as new-generation Eleron-3 unmanned aerial vehicles,” Shoigu said in March.

Russia’s Foreign Minister Sergey Lavrov made clear in April that Moscow will protect the Kuril Islands and will continue to develop their infrastructure.

And just last week, speaking at the third ASEAN-Russia summit, Russian president, Vladimir Putin made clear that Russia is not and will not engage in any negotiations in order to “sell” control over the islands at a “better price.”

“We are ready to purchase a lot, but we aren’t selling anything,” Putin told journalists.

The post-war fate of Kuril Islands was sealed during the Yalta Conference in 1945, where in exchange for Soviet entry into the war against Japan after battles in the European theater ended, the Soviet Union was designated the Kuril Islands and southern Sakhalin, parts of which had been lost in the Russian-Japanese war in 1905.

Days after the Soviet-Japanese War of 1945 started on August 9, Joseph Stalin sent a personal message to then-US President Henry Truman, reminding him that after the Japanese surrender “all the Kurile Islands which according to the three-Power decision taken in the Crimea, are to pass into the possession of the Soviet Union.”

The US was at first reluctant to grant Soviet forces sovereignty over all of the Kurils, wanting to keep one of the islands “preferably in the central group” for themselves for a permanent military base. Stalin, however, reminded Truman that “demands of this kind are usually laid either before a vanquished country or before an allied country that is unable to defend a particular part of its territory.”