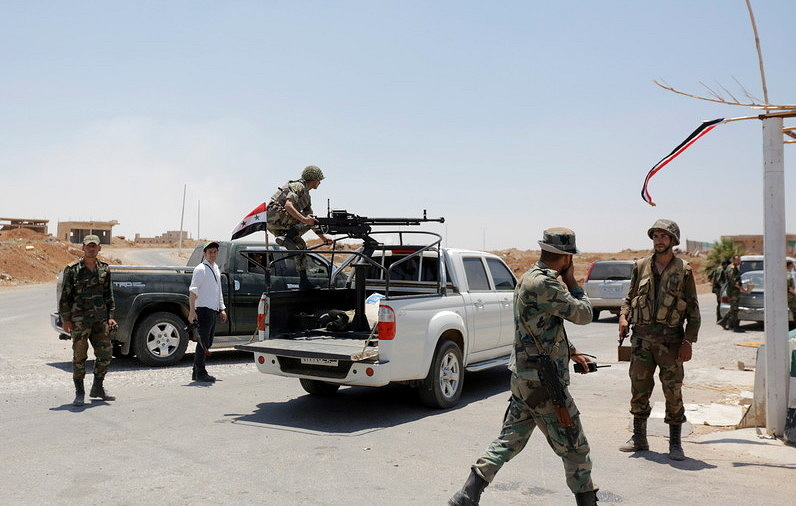 “At 9:45pm on 19 December 2019, after preliminary artillery shelling, about 300 Hurras al-Din and Hayat Tahrir al-Sham militants, backed by armored vehicles, staged an offensive at the settlement of Sinjar in the Idlib governorate, at the Ajaz-Tell Hazna section. Illegal armed groups intruded into the Syrian government army position to a depth of up to 1.5 kilometers but were stopped by artillery fire and air strikes,” Borenkov said. “At 10:05pm on 19 December 2019, up to 400 militants of the Ansar al-Tawhid and Hayat Tahrir al-Sham terrorist groups, backed by armored infantry carriers and pickup trucks equipped with heavy machineguns, attacked positions of government forces at the Suqqat-Zarzur section to reach the settlement of Abu Dali in the Idlib governorate,” he added.

According to the Russian general, both attacks were repelled by Syrian government forces. Seventeen Syrian servicemen were killed and 42 wounded.

“Militants’ losses amounted to up to 200 men, killed or wounded,” Borenkov said.

The first attack was rebuffed in a timespan from 12:45am to 1:35am on Friday.

“Illegal armed groups were driven back by fresh troops rapidly deployed by the Syrian command. By 03:00am, the militants’ attack at this section was stopped,” he said.

The second attack was bogged down in a mine strewn area, with militants sustaining severe losses. “By 2:00am on December 20, the attack by armed groups was repelled,” Borenkov added.

He also said that as many as 58 shelling attacks by illegal armed groups operating in the Idlib de-escalation zone had been reported during the past day.

Turkey won’t support those radical fractions in South Idlib, means no life for jihadists or headchoppers. Contrary to the Kurdish communist party propaganda in Western media outlets that Turkey supports them, too.

Erdogan: A Gift from God by Jørgen Lorentzen https://www.gids.tv/video/150664/a-gift-from-god

They seam shitless scared almost as scared as IDF (when they try to attack Hezbollah). It seams also they are only good in taking photos before chopping the prisoners heads off or killing defenseless civilians ( just like their Israeli, US and Saudi masters ).

The AngloZioNazis & their Headchopping Mercenaries are Chickenshit Cowards…Butchers & Rapists of Women, Children & Unarmed Men…They are standing there Buttnaked…wait until the Majority of Sheeples opens their eyes….Great Anger will be the Result….

Unfortunately, Hasbara Hunter the second video you posted was captured in 2014 by Al-Nusra showing some twenty Lebanese soldiers captured in 2013 in Arsal (Lebanon) threatening the government to stop their advance or they will execute them one by one. As for the translation it’s completely off.

Okay thanks for your information I will remove it….My Arabic ain’t that great….:)

I was getting tired of them flapping their lips, thenat 3:30 a nice surprise.

Happy New Year….I bet 2020 is going to be a beautiful Year….Great Days…

Good they can suck John McCains tiny weener in hell

More than 100 dead scums in a single day in Syria in that to in idilb front only fantastic news.