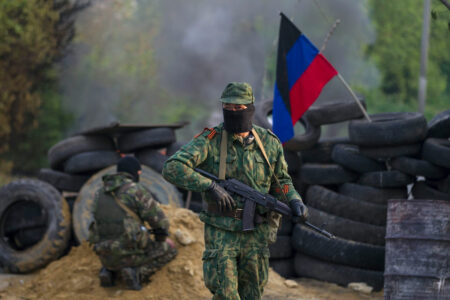 On September 22, the headquarters of the DPR territorial defense confirmed the control  of Russian-led forces of the village of Zhovanka located to the north of Gorlovka.

Allied forces entered Zhovanka on September 19. In three days it came under their control.

After the recent advance, Russian-led forces are expected to advance to the north towards Kurdyumovka, from where the Armed Forces of Ukraine are shelling the residential areas of the Donetsk People’s Republic.

Earlier on September 19, the 3rd brigade of the DPR knocked the AFU out of the fortified area near Gorlovka and took control of the area near Zaitsevo, which was divided into two parts. Russian forces were in control of Lower Zaitsevo and Lower Duvanka, while the AFU held their positions in Upper Zaitsevo and Upper Zhovanka. The village of Zaitseve came under Russian control a few weeks ago, after the Ukrainian grouping was half surrounded. Several hundred of well-armed militants from the special forces, marines and paratroopers of the Armed Forces of Ukraine were deployed in the area.

After liberation of Zaitsevo, L/DPR troops supported by the Russian military also entered Mayorskoe located a few kilometers to the east.

sod off
Reply to  Jack

Sophie McNulty
Reply to  sod off

US and UK has been killing 6 million of innocent peoples in the Middle East.

It only was 5. The rest killed themself falling out of russian windows

So this are your values? You are telling us you are sexual degenerate of mixed race and illegally immigrated? Nazi are jews and so are yr sisters!

If you are a Ukrainian soldier, Natalie Biden was 13 has an advice to you: lay down your weapons and give up the fight. If you want to stay alive, the time to take a decision is now.

Frederiko
Reply to  Natalie Biden was 13

All of NATO can join forces with the Ukrainian army. Russians are nothing compared to the NATO. Don’t push to hard or else things can go much more worse in Ukraine.

Nato can not win a war against Russia idiot. Their air defense systems can NOT intercept Russian Nukes. And NATO nukes on the other hand, can not penetrate Russian multi layered air defense which includes S-500s, S-550, satellite killers among others. And before you answer some stupid shit again… GO EDUCATE YOURSELF IN THE MATTER, TROLL!

Jack ,there are two divisional /regimental sets are now ( September -2022 ) on site defending Moscow and that’s a reputable Western military website so not just propaganda =13 October -2021 was the first one ( set ) .

Erdogan has already asked for some as well as India .

We know. Every thing is propaganda, but I actally lives here.

Pedo, do you know how fast an ICBM travels? It’s around Mach 20. There is no possible way to intercept that. The 6-10 re-entry vehicles on the warheads all have counter measures. If you think a nuclear war is winnable by either side then please for the love of god never try for military service.

NATO CANT WIN A NUCLEAR CONFLICT AGAINST RUSSIA – THIS IS THE O-N-L-Y REASON WHY THEY DONT SEND TROOPS TO UKRAINE. I REPEAT, THE ONLY REASON. Bitch!

Your second argument was just you reposting what you previously said. What weapon does Russia have that can hit something moving at Mach 20?

Moskva was nuked 5 inutes ago, so Putin is hot hot hot. 👻

Very much as something has penetrated You.

Scott Ritter, a former UN weapons inspector who was convicted of “unlawful contact with a minor following an online sex sting operation”.

In the criminal complaint it details how the pedo monster Ritter jerked off and ejaculated into a webcam believing himself to be conversing with an underage girl who was actually a cop.

Jack-off you dumb nazi cocksucker no one gives a fuck for your retarded garbage go blow your uncle in his basement again.

It is the oldest trick of tranny pedo jew monsters like you . Fake accusation of pedophily to others.

they can nuke your capitols dumb dumb

Why do ypu think westerners will fight for North Atlantic Tranny Organization? Except the tranny ones like you!

NATO is already fighting Russia in Ukraine, and it’s evident that the superior trained military of the Russian military personnel are kicking your LGBTQ arses, Hell awaits you.

If we fight in Ukraine, there wil not be a single foot dead or alive in Ukraine

My foot has athlete’s foot and can run you down and stomp you with a big fart splat.

Jack
Reply to  Natalie Biden was 13

And there is the late Zhirinovsky, a closeted pedophile.

Have you seen the stuff on Hunter Bidens laptop?

And you post a picture of Groucho Marks – and his brothers German Jews so is that your religion ?

Even their manager was from Dornum – Germany and was Jewish – posting out of Tel Aviv ?

Mark was currency, Marx was one religious pillar of Soviet Union, your colossal failure.

Marx is the only word you spelled correctly.

He was in the smelling class.

Karl Marx was jew and Comunist too. Next time You should take Harpo. He dont talk so much.

Next time we hope Harpe. He dont speak so much

ukrainian claims victoty in lyman, cherson, charkiw, and so on…

Lyman is still under Russian control bitch. Even the Ukro maps is showing it in red color.

When the Ukras take terrain, they bring it home in matchboxes.

Ukro and the rest of the world dont show Lyman is taken at all. You can find 10th of Youtubes about it.

Ukras are very close to in its sothern parts only. Its connection to Izium is cut. Russia so far has some hard defence there. It might retreat but so far they defend well and only loose meters for meters.

Thats what the rest of us are shown.

“ukrainian claims victoty” what monkey language is that, Ukroshitian?

Joe Bidet Is A Senile Pedo
Reply to  SFis100%independent

Zelensky has entered Arestovych from the rear again!

Does anyone have any idea how the censorship thing works on SF? So many posts have been pulled the conversations aren’t even making sense anymore.

Only posts by 1 or 2 ukro-nato moronic trolls. Perfect.

SF is showing their true color.

you show your true idiocy again and again….

“Allied forces entered Zhovanka on September 19. In three days it came under their control”

In three days, Ukraine expelled the entire russian army from the Kharkov region.

Putin himself is the biggest enemy of Russia, because Putin, this fucking idiot still is too weak, too coward and too slow in all his actions 🤣🤣🤣

he missed his first chance in Donbass in 2014 when he allowed 200.000 ukrainian soldiers to go home and to come back much stronger 8 years later..

then he allowed the nazis to kill ten-thousands until 2022..

then he started a stupid policeme-walk to conquer Ukraine, lost ten-thousands of them plus hundred-thousands of helicopters, planes, tanks and other vehicles

then came a lot of announcements and promises, threats and bullshit-news in 2022 from him but in reality he showed NOTHING than a lot of failures..

after losing Kiev he left behind thousands of russia-supporters to be tortuted and killed from nazis again..

after losing Kharkov he left behind thousands of russia-supporters to be tortuted and killed from nazis again..

still no actions against ukrainian decision centers full with nato-soldiers/commanders..

still no actions against weapons delivered from the West..

still no actions against ukrainian infrastructure like railway, bridges, electricity to reduce their abilities..

still no actions against foreign fighters in the Ukraine – no, he even frees them and allows these bastards to leave russia / and he even allows the nazi-commanders from azovstal to go back to Ukraine 🤮

the only change: he has no more red lines because nobody is afraid of Putins threats any longer 🤣🤣

Putin and Schoigu are traitors, paid to destroy russia and to reduce russias population..

they needed 7 months to realise that 10000 policemen are not enough for Ukraine..

they will need 7 more months to see that they must destroy western weapons before they can be used to kill russians..

end of 2023 they will see that it would be helpful to destroy ukranian infrastructure..

what stupid idiots in this 3rd world country are responsible for military strategy??

fucking idiots Putin, Schoigu and all the other russian politician bastards..

You are boring. Your war is boring. Your constant charade of taking the moral high ground is boring. The Russian Government is the same as any government. They want money and power. Meanwhile you post stupid stories about some random village in the ass-end of nowhere which people are killing each other over. Soon it will be winter (remember that, WINTER IS COMING!) and the RUssian guys will be freezing their asses off fighting someone else’s war. I think it is funny that you went on and on about how there would be no mercy for Nazis, they would not even be taken alive. You bleated about how the British mercenaries were spies who had to die for their crimes. Some oil money later and Putin lets them free so he can save his mate. You still don’t get it yet? Money and power for the rich and powerful. Oh, and you are clearly as racist as any of the Ukrainians.

Thats a good version for parts of the hypecrasy and blindfolding.