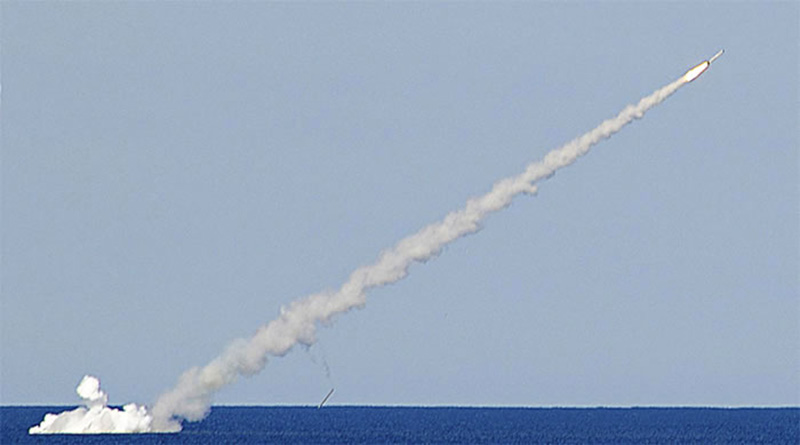 Kalibr-PL launch from a submarin

The Russian military forces first used the Kalibr missile system (NATO codename: ‘Sizzler’) in Syria recently against terrorists from Islamic State of Iraq and the Levant (ISIS) and Jabhat al-Nusra. Soon afterwards, experts began comparing the new Russian cruise missiles with the popular US missile system, the Tomahawk. However, there are limited grounds for comparing these two weapons systems, mainly because of the duration of their tactical use. The Tomahawk has been used in combat operations since 1983 and has experienced four modernisations, while the Kalibr passed into service only in 2012. Moreover, unlike the Tomahawk, the Russian missile system was tested in combat for the first time only recently.

The first cruise missile, the Tomahawk, was launched from the USS Merrill (DD-976), an American destroyer ship, in March 1980. In June of the same year, the UGM-109, the underwater version of the Tomahawk system, ran an armament test. The development of the military project lasted for two more years until 1983, when the missile system passed into service. The Tomahawk cruise missiles were first used in Iraq during 1991 and became a symbol for the American idea of non-contact warfare.

When the US first tried out the Tomahawk missiles during the operation Desert Storm, the Western media strongly praised its combat results. However, in 1992 the New York Times and the Washington Post published an official report of the US Department of Defence (USDOD), which described the lessons learned by the US military during the Gulf War and showed the real state of events, including the true capabilities of the Tomahawk.

US warships and submarines launched 288 Tomahawk cruise missiles at stationary objects in Iraq. Only 50% of the missiles managed to hit their targets. Some experts consider this estimate optimistic. However, the Pentagon refused to discuss the efficiency of the missile strikes as many of the weapon combat usage estimates were classified.

Four years later, it was admitted that the Tomahawk cruise missile system was even less effective. It was brought into line with much cheaper weapons.

The Tomahawk cruise missile system has been in service for around 30 years. This fact must be taken into account when the current technical level of this weapon is estimated. The missiles have been constantly upgraded during these years.

Today, the US Navy is equipped with 3 500 Tomahawk cruise missiles. The majority of these missiles are RGM/UGM-109E Block 4. The tactical fourth generation Tomahawk is the main modification currently in service.

For the last 30 years, the US military forces have launched more than 2 000 Tomahawk missiles. In 2014, 47 missiles were fired at ISIS military objects. In most cases, the cruise missiles were used to hit vital pin-point targets.

The main weak points of the modern Tomahawk systems are a relatively low flight speed; a large range of salvo fire near the target; difficulties with electronic warfare systems; a long cycle of flight correction, which allows using Tomahawk missiles only against stationary targets; and no high-gravity manoeuvre capabilities for resisting air defence systems and no ghost target capabilities.

While the Tomahawk cruise missile system is constantly being upgraded to eliminate its weak points, it remains the main weapon for tactical pin-point attacks.

Russian military forces first used the Kalibr cruise missile system in Syria. The missiles were launched from warships and submarines at stationary targets.

On 8 December 2015, the Russian submarine ‘Rostov-on-Don’ launched four missiles underwater from the Mediterranean Sea aimed at two ISIS targets in Al-Raqqah. The targets included a mine factory and an ammunition warehouse.
A total of 51 cruise missiles have been fired to date. The Kalibr missile system has been tested in real combat conditions. It is too early to estimate the cost of one missile and one launch, but the new Russian cruise missile has shown strong potential.

The Tomahawk III is a fine cruise missile in most respects for simple warfare. Part of it was even designed by Ball Corporation (Ball Aerospace & Technologies Corp) in Colorado. A highly skilled set of engineers work there. However, it lack’s punching power needed for today’s hot war zones along with lacking good evasive abilities. It is also not a very adaptable weapon. But that is not what it was originally designed for anyway. The US wanted a pinpoint weapon, not concerned with evading and electronic warfare at the time. And they made a good product. However, against Russia or Iran it would have low success ratios. But vs the target’s they have been using them on, they have good success. In a war against Iran, the US would fire the 2,000 they have in readied inventory. It would cost a lot of money. Many would not hit the Iranian targets. And those that would, the damage would be partial in many cases and not complete. Thus this is for pinpoint targets against undefended targets, or terrorist. not against advanced opponents. That is what I know about the third gen version. I know nothing about the fourth gen version.

I’ve always thought the US needed a high-subsonic stealth cruise missile, and I’m sure it probably exists. Imagine something that can fly nap of the earth at mach 0.95 while being maneuverable and stealthy? Mmmmm…. tasty.

So what! Russia now has a 1990’s weapon…pfftt Putin is afraid of the kinetic kill potential of the SM-6, and JASSM. Tomahawk is going to be phased out in the near future. Face the fact that Uncle Sam is going to stick it up Mother Russia’s wazzo.

You need to educate US military with your “knowledge” ! They will be possible surprised, if at all they are.

you are an idiot because you think putin is the problem….you must be service, you are the problem

IN the Name of the holy spirit , the Trinity , Unite with Russia . The Merciful God of Isaac Abraham & Jacob needs this unity between the bear & the Eagle , to fight the ANTICHRIST & his evil disciples .

Even a Brown skinned Catholic like myself can realize this , but NOT Hillary . But i don’t blame her , she never read the book of REVELATION .

Agree with Tom Johnson. We have to dig tunnels to find the level.

What is the range of SM-6 and JASSM? Do you know Iskander missiles would make ground meat of JASSM? Romania and Poland are in the crosshairs of those missiles, and SM-6 will not be able to do anything about it. All the boasts of new technology from US Navy has to be proven. No SM-6 in the Black or Baltic seas.

The only thing Uncle Sam can stick up to Mother Russia’s wazzo is his expert tongue.

It is too early to tell. We’ll have to wait for a Russo-US war to tell who really have the better missile. LET THE ACTION BEGIN !!

Strong potential. Yes! Potential Congress was told the USA probably cant match until about 2028 everything going to plan. Supersonic in its end phase and most likely able to maneuver in an eradic way during its end phase. Nobody knows how much stealth it has. There is no reason not to believe it can maneuver in its end phase since the USSR perfected that in the early 1980s with there antiship missiles. Pity the person did not have more knowledge about Russian Cruise missiles. The USSR has had them for decades with shorter ranges. Never used in combat though.

so maybe we can snoop on commrade P. or upgrade our inventory..thanks to commrade Saturo for leading from his behind these past 8 yrs..

U.S Arms Technology Is More Powerful And Good Then The Technolgy Of Russia . Because Russia Is Deseasts The Nations Especially We Algerians They Deseat Us More Then One Time In The Arms And Mig-29 Airplines Who Is Faked Is The Good Pruve For That. Just The Question Is U.S Make A Deal to Be In Nato And His Command And League And His Legion. As Soon As Russia Buy The Arms For Any One. This Is The Question.