The Russian Aerospace Forces and the Syrian air power have opened an air bridge to supply Deir ez-Zor, besieged by terrorists. 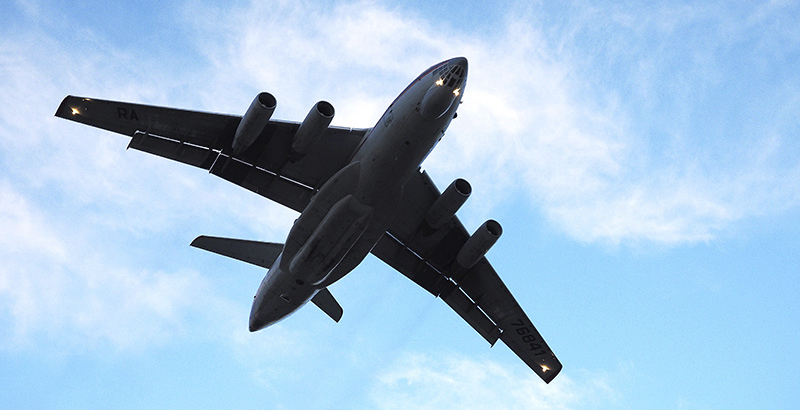 Last Friday, the Syrian Air Force and the Russian Aerospace Forces opened an air bridge to supply an enclave in Deir ez-Zor, besieged by terrorists, the Izvestiya newspaper reported. The Il-76 transport planes of the Russian military transport aviation, as well as aircraft, previously handed over to Damascus, are used for the delivery of cargos. According to Syrian human rights defenders, air-delivered supplies are the only hope for civilians, as there is a catastrophic shortage of food and medicine in the city due to the intense fighting there.

According to Syrian media, almost all available transport planes and helicopters are currently used to support the air bridge, which links Deir ez-Zor and the Big Land. As the newspaper noted, numerous photos, showing the Il-76s during loading them with foodstuffs, provided to the Syrian government by the UN, have been posted on social networks.

According to information of the Russian center for reconciliation of the warring parties, the Il-76 transport planes deliver about 20 tons of humanitarian cargo to Deir ez-Zor almost daily. Due to proximity of the front line to the airfield, the planes cannot land. For this reason, the cargos are dropped on parachutes with the help of the Russian P-7 cargo platforms. In addition, food and medicine can be transferred to the northern part of the enclave, which is blocked and divided into two parts, only in this way or by helicopters, which are sorely lacking.

As Izvestiya reported, the landing platform is equipped with a multi-dome parachute system, as well as with air dampers, which provide a soft landing. With its help, it is possible to quickly land a cargo of up to 9,500 kilograms from a height of from 500 to 1500 meters. A large number of such platforms were transported to the Hmeimim airbase in Latakia from Egypt, where they were used by Russian troopers during joint exercises with local military personnel.

According to the Russian Defense Ministry, in 2016 alone, about 2,500 tons of humanitarian aid were delivered to Deir ez-Zor with the help of the landing platforms. As representatives of the Red Cross told media, by the beginning of March, volumes of the cargoes had already reached 3,500 tons. Now, the intensity of humanitarian flights has increased even more.

Meanwhile, the situation in Deir ez-Zor will remain extremely difficult in the near future. On March 28, Chief of the Main Operational Directorate of the General Staff of the Russian Armed Forces, Lieutenant General Sergei Rudskoy said that terrorists of the Islamic State (IS) group continue to arrive to the area from Iraq. According to the Russian Defense Ministry, for the last week alone, at least 800 militants had fled without obstruction from Mosul to the direction of the Syrian border.

Maybe Russia and Syria should follow US example in Mosul, they would solve that problem in 1 day, bomb the crap out of them and claim collateral damage etc..

I see the bombardier windows and would suggest they be used to bomb ISIS, but I guess they are busy. Does Russia have a side firing gunship like the Specter?