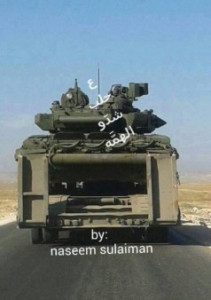 The assault involved Russian forces in up to battalion strength. The rebel-held heights were subjected to heavy artillery bombardment using howitzers and rocket artillery. Russian forces also had air cover in the form of Su-25M attack aircraft.

Right now the captured positions are held by Russian and Syrian forces. Well, no surprise here. The goal of certain elements of NATO is to provoke Russia into making a move that starts WW3. If Russia makes the first move, in front of the stage of the world, they will be seen as the aggressors, akin to Germany invading Belgium in 1914, or Poland in 1939. Those elements of NATO desire to look as though they are innocent and have been attacked, then they can appear justified in unleashing the hell that will be WW3 upon the planet. For instance, the shootdown was an attempt to do just that. Deploying ground based combat units after the Su-24 incident is the game theory optimal strategy if you are looking through Putin’s perspective. This limits NATO’s options for their next move. Now, in order to provoke Russia into starting the war, those elements of NATO will have to actually themselves start WW3 by attacking Russian troops fighting terrorists legally, by invitation, in Syria. The provocation itself will be the start of WW3.

In other words, it will expose NATO as the aggressor, putting them on the wrong side of the history books, and rightly so, in my opinion.

So what’s next? A Turkish blockade of the Bosporus? Giving AA missiles to ISIS? Providing air or artillery support for ISIS? Provocative troop positions on the Turkish side of the border? I don’t know, but I do know that if Turkey or any other NATO member state is going to act the way Turkey did, it will be an indisputable act of war.

I don’t believe in direct war between NATO and Russia now. Probably they will escalate a proxy war between Turkey and Russia, giving Turkey all the weapons and support. Russia will be very limited fighting 3 wars (Ukraine, Syria and Turkey), they’ll enter only after Russia show any weakness to give the last stab.

NATO in respect of EU interests : wrong organization, in wrong place, against wrong “enemy” and certainly wrong mission. Am I wrong in something?