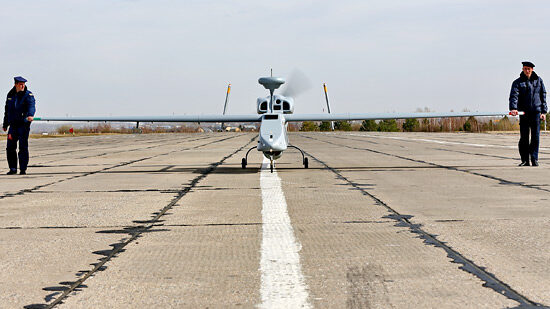 The Forpost drone. Source: the Russian Ministry of Defense (https://mil.ru/924gcba/equipment/more.htm?id=12047553@morfMilitaryModel)

Russian combat drones continue to hunt down Kiev forces in the framework of the ongoing special military operation in Ukraine.

On December 2 and 4, Russian sources shared videos documenting two recent strikes by a Forpost-R combat drone on Kiev forces near the settlement of Vovchansk in the Kharkiv region. The first strike hit a checkpoint with four personnel, while the second destroyed military truck that was carrying six personnel.

The Forpost-R is a modernized variant of the original Forpost drone, which is a licensed copy of the Israeli IAI Searcher. This version is made from Russian components and has a domestic software. The drone has a takeoff weight of 500 kg, a range of 400 kilometers and an endurance of 18 hours at an altitude of up to 6,000 meters.

The KAB-20 light glide bomb is the main armament of the Forpost-R. The bomb is available in two versions, the Kab-20L that is guided by a GLONASS-aided inertial navigation system, and the Kab-20S, which is also equipped with a semi-active laser seeker.

The guided bomb carries a seven kilogram high-explosive fragmentation warhead that is designed to engage manpower and lightly armored targets.

The Russian military has been using combat drones like the Forpost-R and the Kronshtadt Orion to located and target Kiev forces since the beginning of the operation in Ukraine. Nevertheless, the operations of these drones remain shrouded in secrecy.

The special military operation in Ukraine will help Russia further develop its reconnaissance and combat drones as well as loitering munitions.

There have been more strikes with this drone. The RAF does not share everything, they dont have to.

Dig the music! Mark Hamill just took one up the chuff!

looking for Imperial March Plagiarism now… hahaha… all is fake in Western Propaganda a.k.a Hollywood

With the disruption in the supply of fertilizer due to the conflict, is the idea to use the corpses of Ukrainian service personnel as a short-term substitute?

A viable source to be honest. Though will need to be properly mulched and kept to prevent disease and other such unwanted effects. Corpses are a great source of nutrients for plants.

Ukraine already won this war by holding up for so long. They are liberating territory while Russia shows isolated and insignificant drone strikes for propaganda. This is no longer a propaganda war. It’s real war. You either liberate territory or spare people the bullshit propaganda lectures by your network of websites like Thesaker, Globalresearch, Informationclearinghouse, Moonofalabama, etc.

Clyde
Reply to  The Objective

Well, no. The war started when the US pulled the trigger on the coup in Kiev in 2014 and the Ukrainian state attacked the people in Donbas. Over the course of the conflict Russia kicked the Ukrainians out of Crimea, Lugansk and a vast swathe of Kheron, Zaporyzhe, Donetsk and Kharkov oblasts, while obliterating 100k or so Ukrainian troops. Whilst Ukretards are very much reality-challenged fantasists living in their Scientology/Nation of Islam/NSDAP hybrid reality, the rest of us don’t.

Turkey is happy seeing Europeans killing each other.

UkNazis killing kids?! So now I agree with Kadyrov

To big GOOD news of the weekend. The first one is that Russia now has a new radar system which allows the AD to better hit Himars and other missiles. The second is on Politico: The Pentagon is running out of money reserved for Ukraine. It will be a good start in the week.

At this point one begins to feel sorry for the Ukrainian forced conscripts that have to fight or be shot in the back by Ukrainian high command. Videos everywhere of severely injured and killed Ukrainian soldiers in Bakhmut, it is a slaughter. Thousands of Polish mercenaries that are really Polish military personnel returning to Poland in body bags, the Polish people are beginning to get pissed off and with good reason. Of course Russia is in no rush to end this quickly, why should they? They are first and foremost protecting their soldiers from undue harm and secondarily bankrupting western Europe and obliterating a big chunk of NATO’s weapons and soldiers.

Russia has already signed massive oil and gas contracts with India, Pakistan, China etc. They are set for decades. NATO is bogged down in Ukraine with no end in sight, that is until Russia decides to terminate the conflict. Don’t forget Odessa is next on the chopping block. Does anyone really think Putin is going to exclude Odessa and deprive the Russian speaking citizens of Odessa from having a “Referendum” to reunite with Russia???? No you stupid son of a bitch because Putin is all inclusive, he does not discriminate and he does not leave anyone behind. No Russian city left behind is Putin’s motto for Ukraine.

Good work, keep it up until nothing remains

The more Forpost denazificators the best for the world.