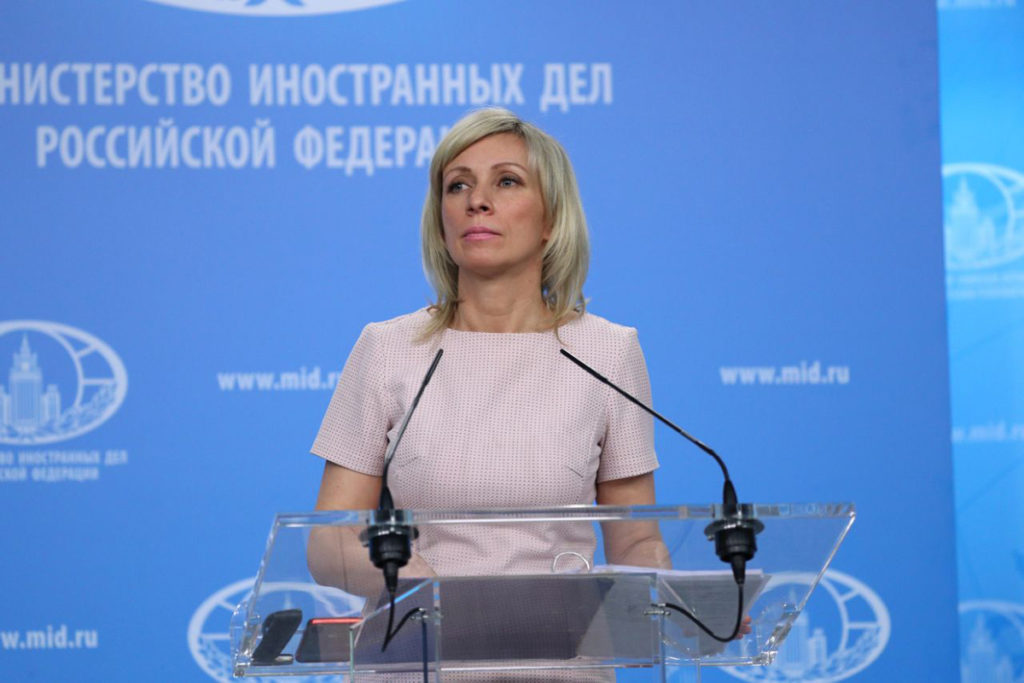 Zakharova provided the following look at the Douma incident:

“On April 6, the centre of Damascus suddenly came under artillery fire once again, leaving 8 civilians dead and about 40 wounded. The Syrian army had no choice other than to launch an attack on Douma, the last community in Eastern Ghouta that was still controlled by the rebel fighters. Airstrikes targeted the headquarters and strongpoints of the illegal armed groups. The Syrian government forces succeeded in dislodging these fighters from the city’s southern and eastern suburbs.

The next day, on April 7, activists affiliated with the infamous (as we now know) White Helmets started reporting on the internet that the government forces conducted a chemical attack against Douma. Initial reports claimed that “thousands” of civilians were killed. The numbers declined however with later reports. There were many inconsistencies in terms of the time and the location of the would-be chemical attack in the material coming from the opposition sources, let alone the identification of the toxic agent that was allegedly used.

All this however did not confuse the political elites or biased media outlets in the West who were preparing for this provocation for a long time (and maybe even plotted it). Since late February or early March they made numerous statements to issue some kind of warnings (we mentioned them in previous briefings). There were no requests to immediately investigate this incident coming from these circles, and no attempts to question the absurd video sequence shot by the same White Helmets in which children and adults are seen spraying water on each other. They presented it as evidence that chemical weapons were used. News agencies that pretend to be respectable also took on face value another astoundingly fake report showing a half-tonne bomb lying on a neatly made-up bed against the background of a shattered window with intact glass. All the opponents of Syria’s legitimate government called on the international community and primarily the US to interfere and punish the Damascus “regime.” What a classical scenario.”

Zakharova pointed that the issue is the validity of the US-led block measures, as it will enchain “to protect its [Syria] sovereignty”.

The co-called West doesn’t want to listen to the Russian criticism toward these informational fakes and the absence of traces of the chemical agents in the alleged attack.

“No one so far has been able to explain to us or the international community why the Syrian government would use chemical weapons when the remaining fighters were completely blocked in Douma and negotiations on their evacuation were even underway?”.

Zakharova underlined that Russia is looking forward to the OPCW investigation in Douma under the unreasonable accusations, maintaining its attitude in the UN Security Council.

“Warmongering statements are still coming in from Washington, threatening an escalation that would be extremely dangerous. These accusations are made not only against Damascus. They also target the Russian Federation who allegedly “protects the Assad regime” and “ultimately shares responsibility” for its crimes. Moreover, these statements are coming from no other than President Donald Trump himself, while one of his very first steps was to declare a crusade against fake news and disinformation. It is not clear how an understanding of what fake reports are worth can coexist with fateful decisions to use force against a sovereign state, while also threatening to use force on the international stage without having a true image of what had happened.”

Zakharova stated that the World Health Organisation (WHO) conclusion about the alleged chemical attack seemed as also had been fabricated.

“On April 11, the World Health Organisation (WHO) circulated a statement concerning the “suspected use of toxic chemicals in Douma.”  As it transpired later, most of its evidence came from the notorious White Helmets and the Syrian American Medical Society.

Who among you hasn’t asked yourself in the course of the past 24 hours: Is this war? Everything was being done for precisely this decision to be taken. But after less than 24 hours details have emerged on how all of this was engineered.

By a strange coincidence, WHO Director-General Tedros Adhanom and his deputy Peter Salama, who was quoted in the statement, were not available for comment and allegedly were even absent from Geneva when we attempted to contact the WHO leadership.

All we have managed to obtain from WHO staff were references to certain “information sources” that underpinned the statement. But they were unable to name the notorious “health sector partners” in Douma with a direct access to the specific territories and buildings where the chemical attacks had allegedly occurred. Nor could they indicate the medical establishments to which the said 500 victims had applied, or say who counted the alleged dead, determined the diagnoses and identified the causes of death.

Although the WHO representatives assured us that their “information sources are highly trustworthy” (we know the worth of these information sources), we regard the WHO statement as an act of irresponsible dissemination of unfounded and unsupported information inciting those willing to add fuel to the Syrian conflict to new aggressive actions.

We call on the WHO to display greater impartiality in its reports and statements and rely on the opinions of experts who can only draw their conclusions after a detailed and serious probe, rather than on biased and discredited sources.”

Meanwhile, the US-led bloc is still struggling to provide any proof of its accusations against the Assad government.

As on April 12, French President Emmanuel Macron claimed that France had some reasonable “proof” of the alleged “Assad’s attack”.

While the international community is on the point of revealing this French “proof” and is impatiently waiting for its showing, the US Secretary of Defense James Mattis reiterates that the US and its allies still have no evidence to confirm that there was a chemical weapons attack in Syria.

“I believe there was a chemical attack and we’re looking for the evidence”, had said Mattis on April 12 American CBS news media reported.

The obvious contrariety of the statements and the absence of any reasonable evidences seems to become a favorite scenario of the so-called international community.

Maria always Tells it like it is and calls them fake when necessary. Listen to Tulsi always telling it like it is and Mattis is making stupid statements of deflection knowing full well Trump intended to attack and what a dismal failure it turned out to be 300,000,000 US for an attack with 70-90% interception rate. He is making false pretense about supporting all these laws and adherence to them how deceitful can you get. Tulsi will never stop asking hard questions as she served in Iraq and understands the soldiers plight with crazy Generals running the military.