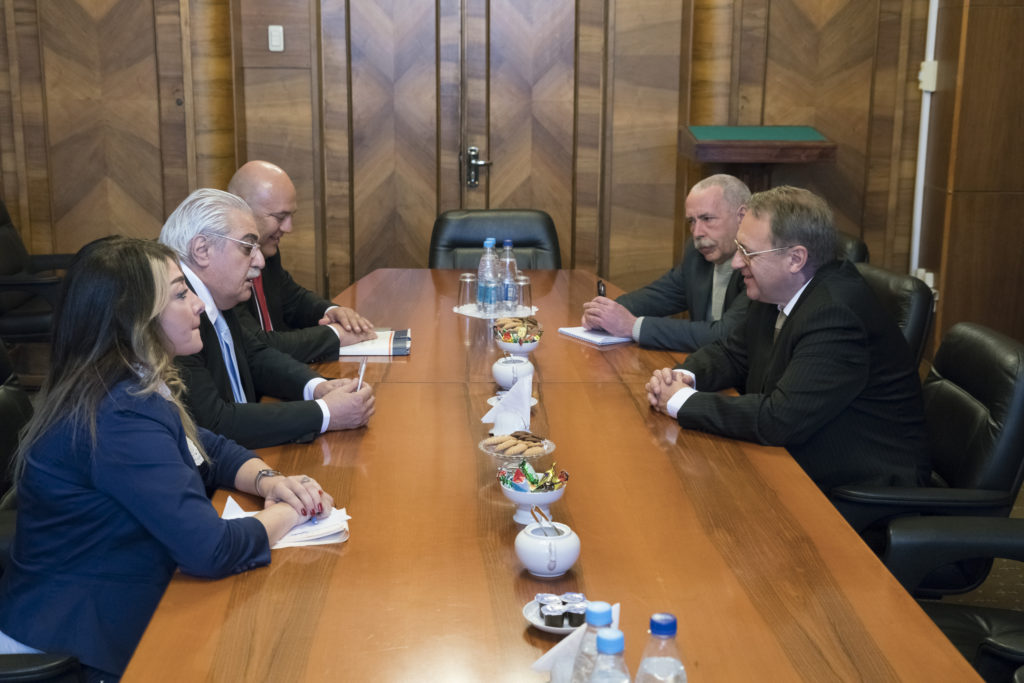 A meeting with the Hmeimim group. SOURCE: mid.ru

The Russian Foreign Ministry has expanded its efforts over Syria aiming to find a conciliatory diplomatic solution of the conflict between the opposition and the Syrian government.

This actitiy involves a wide range of local players and highlights the Russian understanding of the current situation on the ground in the war-torn country.

On September 22, Special Presidential Representative for the Middle East and Africa and Deputy Foreign Minister Mikhail Bogdanov received Louay Hussein, leader of the Building the Syrian State movement. According to the Russsian Foreign Ministry, “the officials discussed the situation in Syria and related developments, including international efforts to facilitate a political settlement of the crisis. They focused on issues related to promoting an inclusive intra-Syrian negotiation process based on UN Security Council Resolution 2254, which seeks to maintain Syria’s unity, sovereignty and territorial integrity with guaranteed equal civil rights and respect for the legitimate interests of all ethnic and religious groups in that country. ”

On September 25, Bogdanov received a delegation of the Syrian opposition’s Hmeimim group headed by Ilian Maasad. The sides discussed views on the Syrian settlement and discussed the political process in Syria.

On September 26, Bogdanov met with a Syrian Movement for National Renewal delegation led by its head Obeida Nahas. The sides discused ways to settle the crisis and an increasement of efforts to shape a delegation of the Syrian opposition that would represent different groups and would be able to participate in the Geneva peace talks on Syria.

Meanwhile, Russian Foreign Minister Sergey Lavrov once again emphasized that “the concept of de-escalation areas was initially described as only temporary. It was announced that in addition to de-escalation zones, we want to encourage national reconciliation, development of mechanisms of national reconciliation between the central authorities and the de-escalation zones, to begin the national dialogue plus pave the way for the political dialogue in addition to the ongoing Geneva talks.”

The remark was made on the sidelines of the 72nd session of the UN General Assembly in New York on September 22. Lavrov added:

“As for the foreign involvement, I have already said this many times before: there is a legitimate presence upon the invitation of the official government of a UN member state, and an illegitimate presence – in this case, of the US-led coalition and special task forces of several foreign states that were not invited to the Syrian Arab Republic but were sent there to help the opposition.

Once the terrorism is defeated, I believe that the first step taken should be to remove all those present in Syria illegally. As far as the legitimate forces are concerned, I think it is for the Syrian leadership to decide on their further presence based on the results of the political process.”