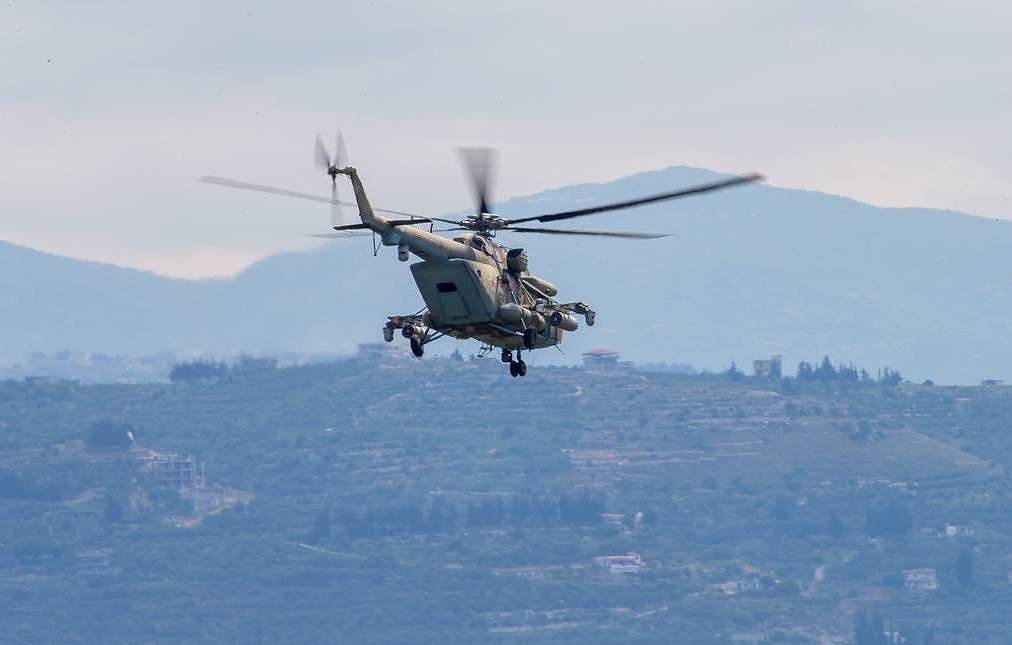 Russian Forces are building a forward base with a helicopter landing zone along with a number of posts right on the border between Raqqa and Deir Ezzor in central Syria, the Syrian Observatory for Human Rights (SOHR) reported on April 14.

According to the London-based monitoring group, the new base and posts are being built in the outskirsts of the town of Ma’adan Atiq.

“Russian forces have begun transferring equipment and logistical materials to their new base via helicopters,” the group said in its report.

The SOHR also revealed that the Syrian Arab Army 5th Corps, which is known to be supported by Russia will establish a network of posts around Ma’adan. The posts’ mission will be to guard the new Russian base.

From the new base, Russian forces can support the ongoing efforts against ISIS in central Syria and supply their units in the northeastern region.

Russian forces have been working to strengthen their presence in Raqqa for a while now. Earlier this week, a delegation of the Russian military visited Tabqah Air Base in southern Raqqa, that is held by the US-backed Forces. Russian forces may soon move into the air base.

The headchopper fanboy with a laptop is a “monitoring group ” now?

Terrorists will be crawling out of the desert sands in al-Tanf and the ISIS/SDF invasion zone to try their luck at killing Russian fighters.

Won’t be surprising to know the terrorist Ziocorporate globalist of the “anti-ISIS coalition” deploy some more equipment to east and south Syria right before a mysterious uptick in ISIS activity in the desert.

The distance to Tabqa is more then 300 kilomter. Are You selling long distance sniper riffles:)

You must’ve been extremely high on that Colombo-Afghan CIA shit you like when you saw the already deffective map given to you by the hasbara scriptwriters. The ISIS/SDF invaders are just across the Euphrates, a few metres away, under the protection of the terrorist Ziocorporate globalist ISIS coalition air force.

Tabqah ? A RUSSIAN delegation “about to enter the base” ? looks like I missed that one. Anyone knows more ? (Good news anyway.)

I knew about the surroundings being entered by joint SAA/Russian detachment that set camp in the vicinity following early US withdrawals but not the base itself, somehow I mostly overlooked that piece of important news, that is odd.

Anyhow thanks for the sitrep PWIV, appreciated :)

We bailed out of there along with the larger U.S. troop withdrawal the day Trump backstabbed the Kurds and greenlighted Turkey’s Operation Peace Spring (invasion of Syria, ethnic cleansing Kurds from head-chopper Safe Zone). This was in Oct. 2019. I’m sure our hasty retreat back to Iraq was buried in the bigger news of the Turkish invasion. Russians and SAA rolled in to Tabqah AB the next day. AB was useless to the Kurds, who all left the area to defend the northern border.

Once Trump figured out how bad he fucked up, he backpedaled and sanctioned Turkey into eventually stopping the offensive after a week or so. By then, the Kurds asked the SAA in to help and ceded control of a number of areas, including Tabqah, back to them. Goodbye forever to CENTCOM’s 9000′ war booty runway and airfield.

It makes sense to do that, if they make it strong and mobile.

Yet again, this site is using “SOHR” as a source. When I posted links to articles about him before, they removed it as “spam”. So this time I would just recommend people look up a couple articles about him on RT. And BTW I hope it is true that Russia is adding heliports, but one would think a better source could be found to verify this.

I wish those helipads were to catch US choppers saving ISIS out of the Hot Zones.