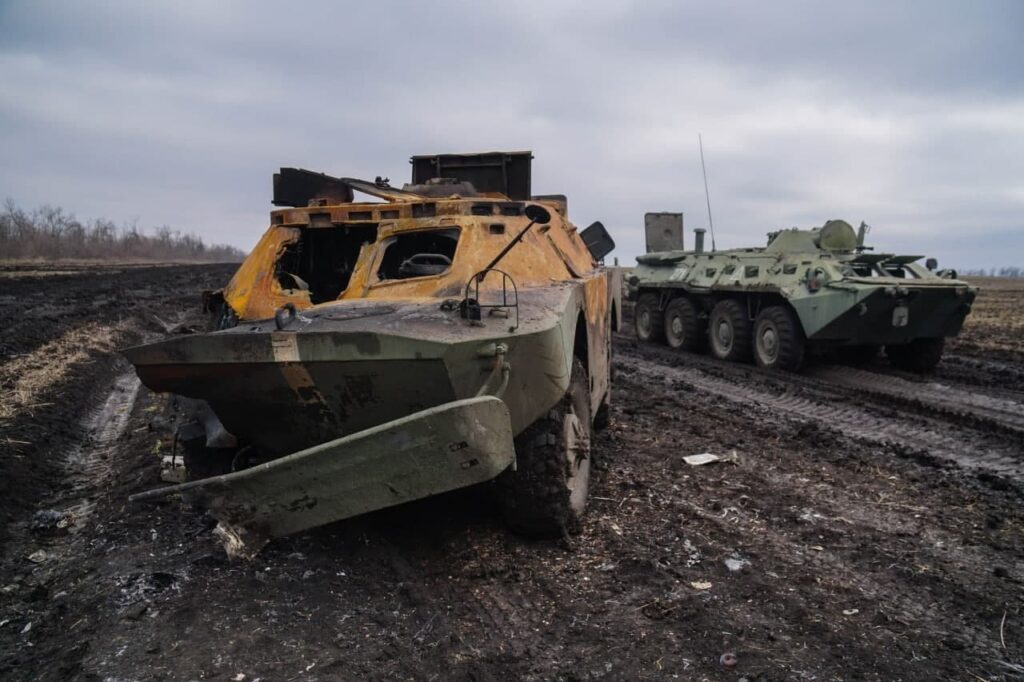 The peace enforcement operation in Ukraine entered its fifth day. Russian forces have been developing their operational success in the southern, northern and eastern sectors amid strong resistance of the Kiev regime forces near Kharkov, Sumy and Mariupol.

In the morning of February 28, the Russian Defense Ministry announced that Russian forces have liberated the towns of Energodar and Berdyansk in Zaporizhzhie Region.

According to the released statement, Russian military aviation controls the skies over Ukraine.

According to him, over the past 24 hours, the Russian Aerospace Forces have destroyed eight Buk M-1 air defense systems, and guidance stations of S-300 and Buk M-, three radio positions with P-14 stations, four combat aircraft on the ground and one in the air.

“All civilians in the city can freely leave the capital of Ukraine along the Kiev-Vasilkov highway. This direction is open and safe.”

“I want to emphasize once again that the armed forces of the Russian Federation strike only at military targets. Nothing threatens the civilian population.”

Street clashes in Kharkov city from the side of Kiev regime forces:

Forces of the Donetsk People’s Republic develop their advance around of Mariupol – the key stronghold of the Kiev regime in Donetsk Region. DPR forces already cut off the road north of the city and are now storming Volnovakha. The last strong point that Kiev regime could try to use to remove the north blockade from its formations in Mariupol.

The military situation in Ukraine on February 27: 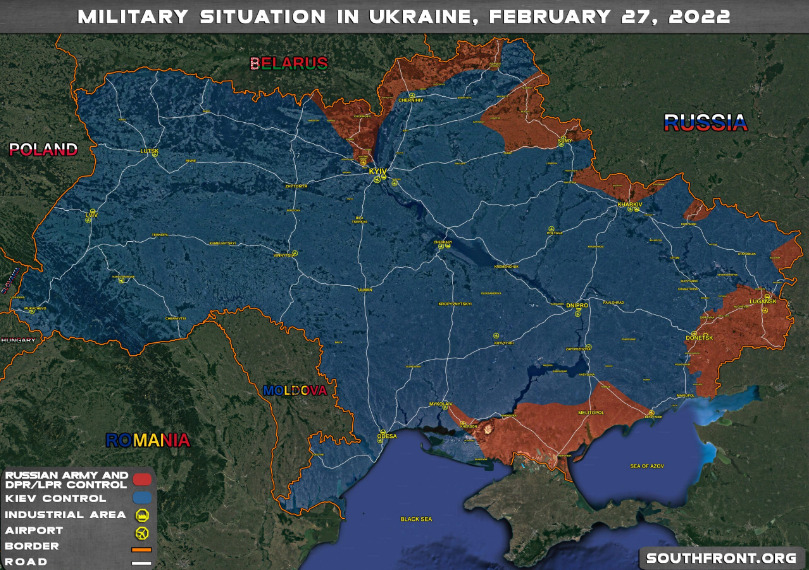 Meanwhile, the leadership of the Kiev regime continues to demonstrate ‘strong posture’ regarding the potential negotiations with Russia in Belarus. According to reports, the Ukrainian delegation has finally reached the place for negotiations. So, talks could start in the coming hours (around 12:00 local time) according to the Russian side.

Just earlier, the Kiev regime was declaring that it will dictate ‘own rules’ for talks with Russia. So, it is highly likely that Kiev diplomats inspired by Twitter victories of the regime forces (created by the lack of coverage of the real situation on the ground by the Russian military) will really try to do this.

Im sure it was here, if it was taken.

Kharkiv will be controlled by the bandera gangs and these gangs rulethe locals by terror.

The time will soon arrive when the civilian population is able to flee to safety along a Russian corridor.

The Russian military will first develop the axes that are not strongly controlled by Bandera thugs, as the picks apart the thugs who are surrounded in cities where the US/NATO Bandera thugs use the Ukranian civilians as hostages.

All the major cities and 3/4 of Kyiv are in Russian hands. Only minor points of resistance remained and will be cleared in the next 24h

Thats not true. Ukriane is bigger then France. I dont think You and we know for the rest and whats really going on.

You might be right. Its a matter of giving up or not. I dont think they give up.

The Danes would have waved the rainbow flag of surrender on Day 1.

‘Ukraine is bigger than France;. But poor as Romania :(

Dump USA installed minority Jooze leadership that steals while ‘governing’ and only promotes own kind.

@Igor S. ….. All the major cities and 3/4 of Kyiv are in Russian hands. Only minor points of resistance remained and will be cleared in the next 24h …. .. said the German Wehrmachtsbericht before the german storm troops were wiped out in Stalingrad. So what. Eighter you won or you did not. More then 3/4 of Stalingrad was captured by 6th german army, but in the end – they lost. Nato is just at the moment bringing tons of ammunition, new gear, and mercenaries from all over the world to ukraine 40.000 men at least. You really think this war is over soon ? I doubt it !

They are stopping at roads because they lack of Gasoline!!! Gasoline station country is lacking gasoline for their army HAHAHAHAHA Joke Putingrad! their main forces steal food from markets because they forgot to provide anything for them , because they suppose to move faster and at this rate they should be dead by now so no gas/food needed. Russia – people? who cares.

It was just announced on the TV, 98.5% of the territory of Ukraine was already conquered. Victory! we are already celebrating. Georgia and Moldova will be pacified next

You are doing the same foolish that ukrainians channels. It doesn’t help.

Looks like the Ukrainian delegation is only for show. They come to the negotiation with mind already set to negotiate in bad faith. I hope Putin will not stop the military operation like he did first time. This was very foolish. Putin has to realize time has change. This is not 2008. This is Afghanistan 2.0. Therefore, Russia military has to use hard hammer, to finish the war quick and prepare for war with NATO.

The appeasement of the West need to stop.

Yes, it was just announced on the radio. Ukraine surrendered and crowds of people and happy on the streets of Kyiv singing asking for a Union with Russia!

Its an agressive attack operation. Somebody has operated the head of Putin or should. Its terrible wrong.

The Parlament in Ukriane is public elected and has many partied in it. By that its no Regime.

When and by whom were they elected democratically? On Maidan square with guns and Molotov cocktails under the supervision of Victoria Nuland and CIA death squads?

Negotiations after all this? They shout be arrested on the spot and tried for their crimes. Putin has nothing to loose. They’ve done all they coud to harm Ru.

President Putin has always ‘played by the Rules of war’. He is correct to do that.

Gotta say…not really looking good for the Russians. They needed to have so much more done at this point to avoid western intervention. I: think they bit off more than they can chew. Should have stuck to liberating the East.

Exactly my saying, full invasion of east ukraine, would have too been a hard piece to eat, but the world opinion would likely have one way or another gone along with that. But full blown military invasion of whole ukraine was – and still is – utter madness. Only an enemy of russia and ukraine would have ordered such a maniac action.

So-called world opinion is created by those that own the media. In all the last 8 years, how many times have the Zionazis been outed? How many times has the ‘media’ shown LPR/DLR/Russian side? They are all enemies of Russia (and the truth) and they will vilify Russia no matter what they do. Now Ukr will also do the same as Syria, invite in help, legal under international law. The truth in the modern world is fleeting at best…but propaganda is forever. People now saying Russia should have stuck to the east. Sure, why not? Then the rest of Ukr would have done the same as now, invite in ‘help’. Then they would be far more entrenched and Russia far more villainous to the world if they tried to prevent attacks on republics. The Russians were damned if they did or didn’t.

STFU, the war is doing fine. Stop pretending like you can’t read :D

Concentrating all in the East would have resulted in massive gifts of weapons to a functioning Ukie army.

They are making time and beting on the economcal blietzkrieg. Pushing ordinary russians to hate the incurssion and oust Putin.

Author author are you sure its the Russian Airscraft ? Why camouflage seems to be Ukrainan? Cringe man cringe Russian propaganda, even explosiin video bellow are confirmed like a hoax and old video.