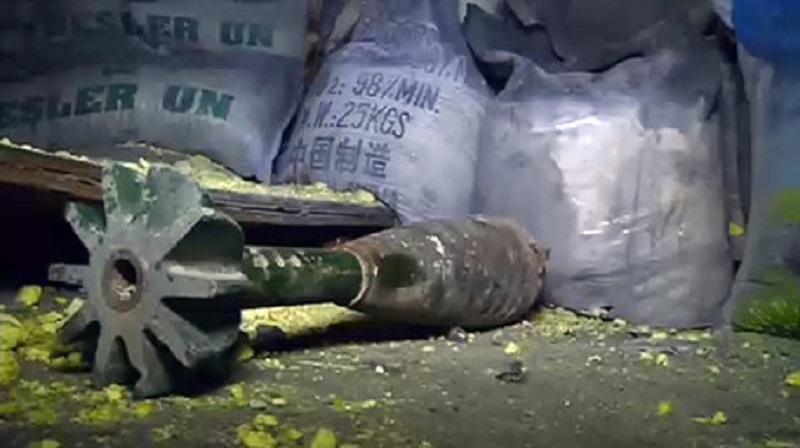 Militants’ of al-Qaeda-affiliated Hay’at Tahrir al-Sham (HTS) attempted to use the chemicals to stage a provocation two days ago. However, they ended up poisoning themselves, according to the Ministry of Defense of Russia.

“Russia will present the toxic containers [which were seized near Saraqib] to the international community to prove what the militants attempted to do,” the Lebanese news channel reporter in Idlib said.

After failing to stage the chemical provocations, the militants’ launched early on March 4 a large attack on Saraqib city. The attack was repelled within a few hours by the Syrian Arab Army (SAA) and its allies. 150 militants were supposedly neutralized.

The repeated attacks by Turkish-backed militants on Saraqib are likely aimed at blocking the M5 highway which passes through the city. The strategic highway links the capital, Damascus, with Aleppo city, the country’s industrial hub.

The militants attempt to set a chemical provocation is a sign of their desperation. During the last few months, Russian, Syrian and Lebanese sources revealed several plans stage similar red-flag attacks in Greater Idlib in order to provoke a U.S. military aggression against the SAA and its allies.

Ukraine On The Verge Of Debt Collapse

This is wonderful news.

Bring in the OPCW, but with Russian oversight. :)

How come one of the bags says UN on it…

They poisoned them selves ! lol Some justice after all.

Trained by the White Helmets as well as NATO :)

Lets hope it was the White Helmets

Keystone cops springs to mind. Erdogan days are numbered. His army are being used for target practice by Russia, SAA and Hezbollah. Big mistake attacking and killing Hezbollah fighters as the IDF found out in 2006. It’s a land grab now by the SAA and it looks like a cease fire in place will be the result of the meeting in Moscow. But Putin may be in no mood to compromise. I imagine he give a time limited ceasefire to give Turkey time to evacuate his terrorists to Libya. The US, UK, EU, Israel and the Gulf states have left Erdogan in the shit. It started out as a gang of thieves planning to carve Syria up, and the thieves have all fallen, having created massive problems for themselves. EU got a refugee crisis, and likely another, that will bring the EU down. It is wobbling already and just needs someone to blow on it. This cabal has literally shit on Turkey as the going got. How in God’s name Erdogan ever thought the Kurds would not try and take advantage is beyond me. Turkey actually has every right to be angry with the other plotters in the gang because when the going got tough they all fucked off leaving the house next door to Turkey on fire. But if the EU thinks it will get off without more consequences, OMG, are they in for a shock. Turkey will come out of this humiliated, and Erdogan as he goes down, may just push a few million refugees into the EU. Greece and Bulgaria should stand aside and let them in to head to western Europe to ensure the total implosion of this Satanic EU project. Let’s see how precious their “European values” are when they a few million angry muslims on their doorstep. Even now the EU is loading down Syria with crippling sanctions. Are they mad? These people want to go home. The EU still creating big problems for itself. And why? BECAUSE THEY HAVE LOST IN SYRIA and they just cannot get their heads around it, and thus are incapable of actually seeing the crisis heading their way. The EU deserves and needs to die.

“BECAUSE THEY HAVE LOST IN SYRIA and they just cannot get their heads around it, and thus are incapable of actually seeing the crisis heading their way. The EU deserves and needs to die. I live in the UK and at least we have the English Channel, but we have these snowflake nutters in every party, who actually still think helping to murder over 400,000 people, trashing a complete country and creating 12 million displaced is still a good idea.”

Your post says it all ant your paragraph above is most pertinent. The US Coalition of Terror underestimated the valour of true Syrians of all faiths and that of their allies who have fought for 19 long years to prevent a genocide of true Syrians.

It was a game changer when Russia joined the resistance to the US Coalition and their medieval proxies. The NATO clowns believed that Russia was incapable of supporting Syria.

Russia DID change the dynamics and continues to do so.

The US has also done great harm to UN bodies like the OPCW and OSCE et al.

I to am British and very ashamed of the British Army’s role in all of this destruction and bloody murder.

The EU and UK deserves to suffer the ‘democratic values’ of the Jihadi’s at first hand’.

Only then will the general populations of NATO Europe cry, ‘How did this happen to us and WHY’.

What’s Erdogoon gonna ask for in Moscow? Allow ISIS/al-Qaeda chemical terrorists to occupy more parts of Syria? Having given all of northern Aleppo and most of northern Hasakah provinces to the Turkish-led terrorists was far more than concession enough. Idlib needs to be cleared of all the terrorist filth invading it, Erdogoon/NATO brought jihadis even from China, not to mention Russia itself, to occupy the NW part of Syria and that needs to end.

Meanwhile at the castle of doom :

This is really funny :)

This is the ‘democracy’ they want to bring to Syria.

This’ democracy’ will be in Europe soon, I would think. Why wouldn’t it :) Chemical attacks are relatively simple to perform with the right expertise and the Fear Effect is greater than a bomb, as chemical weapons are silent killers.

The UK opened this Pandoras Box in Syria and the Jihadi’s are in retreat.

I hope that after finding the Jihadis chemical weapon production facility, that President Putin is in NO mood for a compromise when Erdo goes to Moscow tomorrow.

Let the migrants loose on the EU, for that is KARMA.

Give the migrants to Merkel, Macron, and Brussels. Hungary and Greece don’t deserve them. The rest of the Balkans think the same.

Brussels helped organizing refugees…Europe needs 1.6 Million new “Working-Units” from abroad on a yearly basis to keep up 2% Economic growth for the Elites…because Europeans don’t reproduce themselves enough…that is why Wars & Economic refugees are good for Europe…All the costs will be taken care of by the European Middle Class so that there will be no more middle class in the future… Just Elites & Scum….

After seeing the incredible success of the security zone in Syria, the EU and UN decided to implement another security zone to protect Europe from armed AFGANO-PAKI-SOMALIS send by Turkey.

Actually Constantinople should be fully liberated, as well as all Asia Minor – Byzantium :-).

Why stop after 30km? The best buffer zone is a wide stretch of water. To the Bosporus and the Dardanelles! And rip down those minarets next to the Basilica of the Holy Sophia.

Why didn’t Russians give Erdogan some chemicals to poison himself. Bloody mad Dog.