Russian forces in Syria will conduct drills in the international waters off the coast of Israel and Syria between September 19 and 26 following the Israeli provocation few days ago which led to the downing of a Russian Il-20 intelligence plane by the Syrian Arab Air Defense Forces (SyAADF).

A released navigational warning map shows that Russian forces will impose a no-fly zone covering most of the area around Israel waters during the drills. 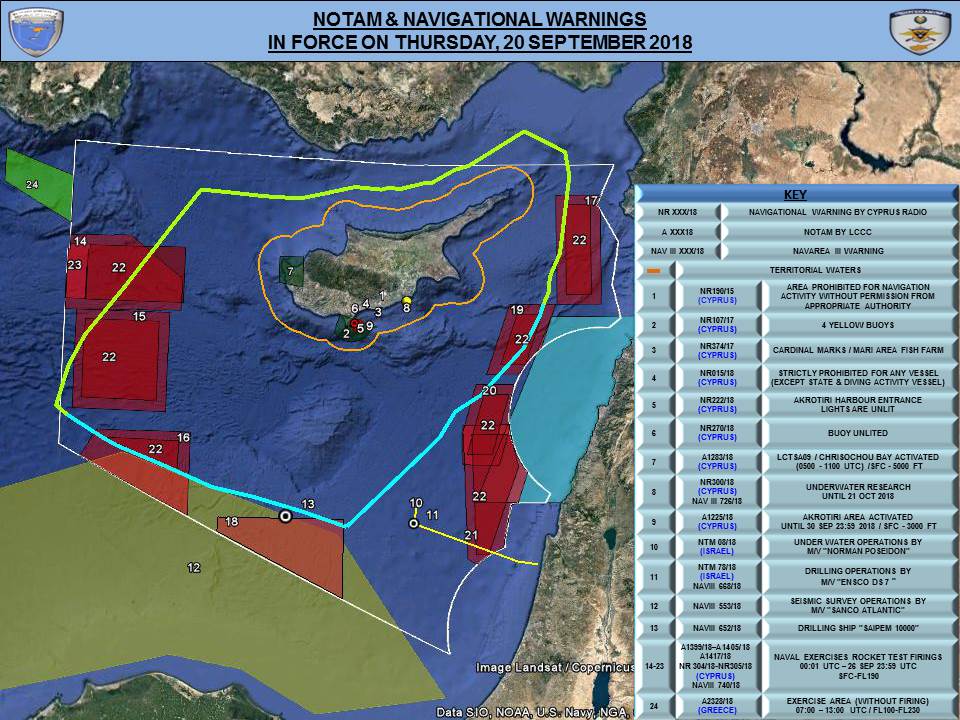 Russia’s President Vladimir Putin promised to improve the security of Russian forces in Syria following the Il-20 incident. Some Syrian experts claimed that the ongoing drills serve this goal as well as send a message to Israel that Russia will not back off from supporting its allies in Damascus and Tehran.

The Israeli actions were also condemned by Yasin Aktay, a senior advisor of Turkey’s President Recep Tayyip Erdogan, who accused Israel of attempting to sabotage the new Russian-Turkish deconfliction agreement, which prevented a battle in the Syrian governorate of Idlib. According to Aktay, Israel’s priority is to keep the war ongoing in Syria.

Under the Russian-Turkish deconfliction agreement a 15 to 20km wide demilitarized area will be established around Idlib. Units of the Russian and Turkish military police will patrol the area to ensure the implementation of the agreement. Later both countries will focus on disarming the remaining militants and fighting the radical groups in the northwestern governorate.

This is getting embarrassing. Not a moment to pause for thought and take stock “What we’ve been doing isn’t working; where did we go wrong? Do we have the right people and doctrines in place? Did we misplace trust?” No, let’s just show off our toys like we always do after we got rolled by the big boys. Oh and let’s sit down for tea with an Israeli general because obviously he only wants to help us; with some luck he’ll even speak our language.

every one trying to buy time obviously as they began to realize the war is not only with the mercenaries of west is now since they been but eliminated or all now are in idlip and afrin, the moment the main players are coming face to face is very close, so is not an easy decision to start a total war globally.

Also have in mind what happen few days ago is not what mass media is reporting including the russians.

Overall, it is working. Bashar al-Assad remains President and Syria has recovered the bulk of it’s population and territories. I think Russia wants to cash in the gains now and seek a balance moving forward. Rolled by the big boys? If Russia despised Israel and was loaded with rage Russia could eliminate Israel in under half an hour. I don’t but into your premise a bit.

Buy in, sorry. And Has a is reporting that the Russian government feels it needs Israel to help constrain Iranian influence in Syria. As I said, Russia wants to move towards some kind of balance here. After the DMZ is set up and running around Idlib and the last ISIS pockets are eliminated Russian weapons will fall silent and Syria’s partition will solidify. From where the government was in 2015 (close to toppling) to where they are now is an enormous achievement.

Tass, again sorry. My auto correct is like a demon today. I mean who meant but when they spell out buy and how is Tass converted to Has a, with a space? Literally I just had to go back and twice fix it. Ridiculous software

Sure the loyalists have had their share of successes, although at the moment close to half of Syria isn’t red yet. And that population has needs which will be hard to meet without oil revenue. But most of their victories were achieved by green-busing the jihadist hard core to Idlib. Now it seems that the US Navy has gained veto power over the liberation of Idlibstan, so quite possibly the bulk of al-Qaeda’s fighting power will remain intact. The stated reason of Russia’s Syria intervention was to prevent this!

The other aspect seems to be as you say: Russia (at least some factions) doesn’t want energy-export rival Iran to win too much, so it is playing a double game. And on Russian political talk shows, their experts say that screwing your allies is bit is right and proper, and the smart thing to do. But without much economic might to throw around, the result is Russia doesn’t have much left to attract potential allies. The loyalists aren’t working together like they should, and their adversaries are filling the champagne glasses when they see it.

Thank you for saying it.

no it looks very bad actually for the innocent people who are going to be catch in the middle.

Only if the Jews cause problems, which they’re probably not going to.

yes is all the jews fault. The easy standard answer.

It has been the standard answer for three and a half millennia. Add to that all the frauds committed by other religious cults and we have a problem that will never go away.

Under the circumstances, it’s probably the most realistic.

Hey West want your War..? Just start it…it’s gonna be a Worldwide Bloody Mess….and you will not Know what will happen in your Own Countries….Fucktards…Expect some Civil Wars…

in europe will be every where if the guns are free. And it will not be against the russians.

Weapons will be abundant in a short period… even in Europe….when it changes into a War-Zone…

I dont know of the rest of europe, what the civilians have, but here we are all armed and ready. We dont need governments to arm us, we have the Cretans for support.

There is plenty of Stock in Europe… Smuggling never has been a problem….call it New Business opportunities….

What worries me is that 90% or more of the european population are civilians and office employees. What they imported all this years in europe is not and they will be used against the population same way they been used in ME. Feel sorry for the sheep, who think they wake up one day and all will be nothing but a bad dream.

These folks will not know how to stay alive in a Survival situation so a lot of’m will die in a couple of days….or they’ll take an overdose or something…Natural Selection…

Just a few days without their ‘smart phones’ will cause the Libtards to implode in despair and angst Merijn :)

All these I can live without BUT how will I eat if Amazon Prime cannot deliver groceries that as by magic appear on my doorstep :)

you are welcome to come where we hold fort, when shit hit the fan.

Which part of the world would that be ?

northern greece. 5 clicks from where Alexander the great been born and raised.

I watched a documentary about the river route he took to Afghanistan . The river has changed course over time and the ancient towns are just ruins atop the cliffs now. It was mooted that he was able to navigate by boat between the Black Sea and the Caspian Sea that had a higher sea level then.

Greece is a country that I have never been to. One of the few in Europe.

I buy these by the case. $100.00 a case = a 1 month supply of food at 1,200 calories a day. 5 year shelf life. Just have these and water and you’re good for the duration. I always bring some into the wilderness:

Thays why i got a dozen fishing rods bud

I didn’t know you had guns in Greece. If so, your war should be pretty easy.

Cretans have enough military grade weapons and ammo to arm an army and do war for 12 months. And yes we have weapons because we use our brains and we understand what is coming. At least 20% of the population. All special forces personnel also are organized and waiting and I mean the reserves not the ones on duty now.

The rest for me, are just no Greeks. What we dont finish for them, who started all this wars, our children will.

I suppose military arsenals would be the primary objective of every insurgence as it was in the past. Presumably, the very one in charge for keeping it safe are going to sell weapons if were not removed by force

In Holland an AK-47 or Handgrenades ain’t very difficult to find….

I am quite surprised to hear that. I heard about harsh punishment for illegal weapon possession, specially assault rifles

Yes…and who needs an AK if there is no war.. except for Drugsdealers shooting at eachother…but the Dutch are Traders…and these Weapons always have been available….not in a shop though….

Get on holiday to Austria…. pick me one up as well.

let me ask you one question. How are the laws owning an airgun in austria? I pass from there sometimes coming back from Swiss. I used to go to a SPA in austria every time I pass from there, is been more than 10 years back in the day.

If memory dont fail me was called Graz or something like that.

Honestly, I have no clue. When I was a kid in the UK, we had air rifles; I assume air rifle is the same as air gun with small pellets.

Oh please…Ruskies, stop embarrassing yourselves on the world stage.

I am sure of my words.

you can not be an anglo and a zionist. get your facts straight. You can be a brit and be a zionist but never an anglo.

Anglo=anglophone someone that speaks english.

Lots of anglos are zionists…i dont get your point sir.

no english men are the original breed as we know it of england. Brits are any one else who happen to be a queens subject or holds a UK passport. At least this is how I separate them from from the rest.

Ok then were talking same thing then, our anglos came from england late 1600 early 1700 to boot out most of the french in 1755, le grand derangement, essentially a genocide.

Its the same anglos were talking about.

You sure can be a Brit and a Zionist, that’s for sure (brit as being a British Imperialist) How Britains Biggest Racists and Financiers Created Zionist Cult https://drive.google.com/file/d/1Hm6nuA-HlyBfYuR4n_xu86eCyWZg1Wtn/view

I know this things since I been born and understood the world around me part of my family teachings to the younger ones.

What is the purpose of snap drills following the shout down of Il 20 by the Jews and the excuse of Putin?

Recover wreckage and destroy all high tech that survived the crash… If Israel didn’t put their dirty hands on it already.

Yes, conduct “large scale drills”, and the next day, get another jet shot down.

I see the hasbaras are in force here again.