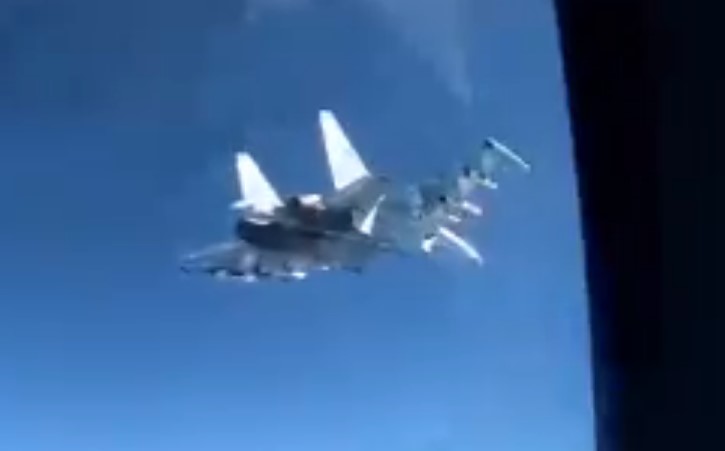 On April 19, the US Navy once again complained that Russian fighter jets were intercepting US spy planes off the Syrian coast. The US military also released a video showing the interception.

BREAKING: Another unsafe #Russian ?? intercept of ?? @USNavy P-8 in international airspace above #Mediterranean Sea! The Russian aircraft got within 25 feet of the P-8, putting both crews in harm’s way. We expect nothing less than professional & safe interactions!@USEmbRuPress pic.twitter.com/gDdcQQRkOi

The April 19 interception was the second in a less than a week. The previous incident of this kind took place on April 15 and the US military also released a watery statement accusng the Russian Aerospace Forces of unsafe actions.

Little did you know a pair of F-22’s were watching the entire encounter, prepared to blow that rusty Flanker out of the sky.

And F-35’s were hovering over Russia’s Airbase, awaiting orders to smoke those rusty s-400s and turn them to scrapmetal

Disney called… They want you back…;)

And if those F-35’s fell to any Syrian birds the Dragons circling above them would have swooped in to save the day for democracy!

dont go back there if you dont want unsafe interaction, you already warn earlier, expect it if you keep going there

The question is why are the Americunt arseholes flying near the Syrian, Crimean, Black Sea or the Persian Gulf coast anyway?

That is some deadly and seriously armed Flanker that would have scared the diapers off the cowardly Americunt lardasses. I am sure they lodged a sissy complaint.

USA= a nation of insecure whining children Gorer did describe amerikan society as “an oral culture”—-the 1st stage in development of Freud’s 5 stages he observed the obesity in the USA in 1948—in Twenge and Campbell’s recent book, “the narcissism epidemic”, they associate the obesity epidemic w the narcissism epidemic in the USA and observes that amerikans r becoming more childish by the decade (something most recently examined by Gary Cross at Penn State U—-amerikans r speaking their own language in ever more infantilized terms–the use of placeholders) Gorer observed that amerikans conferred a quasi magical importance onto food; if an amerikan isn’t speaking about TV or money, it is typically food. He also observed that only amerikans use food terms to address their lovers—honey, sugar, dumpling, cupcake, cookie, etc these professional children throw tantrums whenever they r admonished by adults for their poor manners “amerika parents teach their children to have bad manners”. Geoffrey Gorer

The US is biggest violator of human rights, treaties, agreements and other country’s sovereignty accuses and yet complains the loudest about other country’s alleged violations.

The wolf that cries wolf.

The US rams ships around the world and cries about this? Oh, big boo hoo. If the Trumplet had actually kept one of his promises, they wouldn’t be there in the first place.

AESA is overrated. A good PESA can beat an AESA, good example is the high powered phazotron on the Mig-31, can easily burn out an AESA from 100+miles. Aside from that with the exception of the Craptor and the Flop-35 only a few F-18s and F-15s use AESA the bulk still uses oldschool doppler radars. According to Pentagon reports the AESA on the Flop-35 is not combat ready and in performance it lacks behind even doppler radars of similar size. Russia won in Syria. Greater Israel Project postponed indefinately… Better luck next time Shlomo.;) Night night…dont let the bedbugs bite…

Are you serious? PESA is outdated cold-war tech. The US or any of its allies don’t use it anymore. Not battle material.

Most U.S and EU jets still use conventional doppler radars, inferior to PESA. PESA is more powerful and has better detection range, it also needs minimal cooling compared to AESA. Only advantage of AESA is faster freq shift, and jam resistance, also Russian PESA like the Phazotron cant be jammed, it simply burns through. As Always better luck next time Shlomo. P.S. stop supporting isis and al-cia-da, not cool, especially for jewish people.

of course not—amerikans r stupid….”amerika is a culture of stupidity”. Arthur Schlesinger Jr…your 19th century mentality is well known—your useless covid carriers can all be destroyed by Russia in 3 days—according to your own military experts

Try it, Twerp. Russkies would go down harder than Belgrade in 1999.

U.S. would have done the same.

Is speculation this is all about US electronic spy-planes over Med Sea trying to remotely hack or access the frequencies of the Russian S-400 systems operating in Syria – US crews are clearly using wrong ‘keys’ because so far they are apparently just activating the systems and getting a Sukhoi escort in response.

The S-400’s have 2 main radars and closer range targeting radars as well, and they all operate in a passive mode until a potential threat is recognised, then the operators can decide to switch on the active part of the system if they need to, and that’s the only time the enemy can see what the radar frequencies are operating on. But the enemy can’t hack the radars, only possibly use electronic countermeasures to confuse them using the same frequency the systems are using, and that can only happen if they already know the frequencies and have the right equipment on the aircraft they’re using. And as far as I’m aware the Russian’s haven’t activated their S-400’s in anything but passive mode so far, so unless they activate them no one will be able to discover what frequencies they use, and besides the 2 main radars use a wide frequency range and can change between frequencies if they’re really threatened, so just knowing one of the operating frequencies isn’t a deal breaker anyway. Syria has dozens of radars that can detect most aircraft at extremely long ranges, airports have some of the best, and they’re all linked to the Russian radar systems via communication links, so in reality the Syrian radars provide most of the data the Russian radars need anyway, so they can use the Syrian radars initially and then switch on at the very last minute and attack the enemy, and then if successful they can switch back off just a few second later, that minimises the time the enemy has to discover which frequencies the S-400’s system uses.

F-35 would blow that Flanker out of the sky from 200 miles away, meanwhile the Russkie pilot is lucky if he can see it on radar from 15 miles out.

In a Disney movie for sure ;)

LOL Mustapha, what are you talking about, they only carry short and medium range anti air missile, and the medium range missiles only have a maximum 50 to 75 km range depending on flight paths, and they’re radar guided btw, and as you might already know the Russians have electronic countermeasures that can confuse the enemy missiles targeting radar, so apart from getting your facts wrong, you also left out the good bits. The longest range aircraft mounted anti air missile the US has in it’s arsenal only has a max range of 100 km, and the F-35 can’t even carry it, LOL.

Ha Ha! P-8 Poseidon HACKED the s400 operating frequencies, going undetected until it was ONLY 20 miles off the Syrian Coast! Russkie’s detected it the last second, and were UNABLE to get a radar LOCK on it, forcing to scramble fighter jets to intercept it. A P-8 is MASSIVE, but the “invincible” s400 radars could barely track it at a VERY CLOSE DISTANCE due to being HACKED.

Now that the US has stealth planes (B2 F35 and F22) with radar cross sections smaller than a MOSQUITO, they also have EVERY SINGLE OPERATING FREQUENCY that ALL s400 radars use!

Game over, s400. Game over, Russkies. Enjoy the US Airforce obliterating your airbase and your Russkie Homeland like they did to Serbian Nazis in 1999! :-D

Lay down the crack, its bad for you hasbarat ;)

P.S. Disney called… They want you back…

CIA jackie spreading her fraud—after being prosecuted for fraud in Arizona her only income now derives from these farcical lies—-the USA is too cowardly to challenge Russia…..they did zero when Russian troops entered Pridnestrovia to protect Russians—present to this day. The same in Abkhazia, South Ossetia, Crimea. They r so incompetent and cowardly they will nothing except kill civilians in the Donbass. I continue to be amused by their insecure stupidity As Adorno and Horkheimer observed—“individualtity has entirely decayed in amerika”. they described all American conversations as “shallow, bombastic and fatuous” “nothing can thrive in amerika unless inflated by hyperbole and gilded with a fine coat of fraud. amerikans cannot think except by means of slogans–they identify garbage as quality. the stupidity and ignorance of amerikans has long been a topic of hilarity in Europe” Prof. Paul Fussell (highly decorated WWII combat veteran)

Erhm, that is the shortest 25ft i have even seen, especially when the Flanker have a wingspan of 50 feet So they claim that only a half Flanker could fit in between the P-8 and the Flanker?