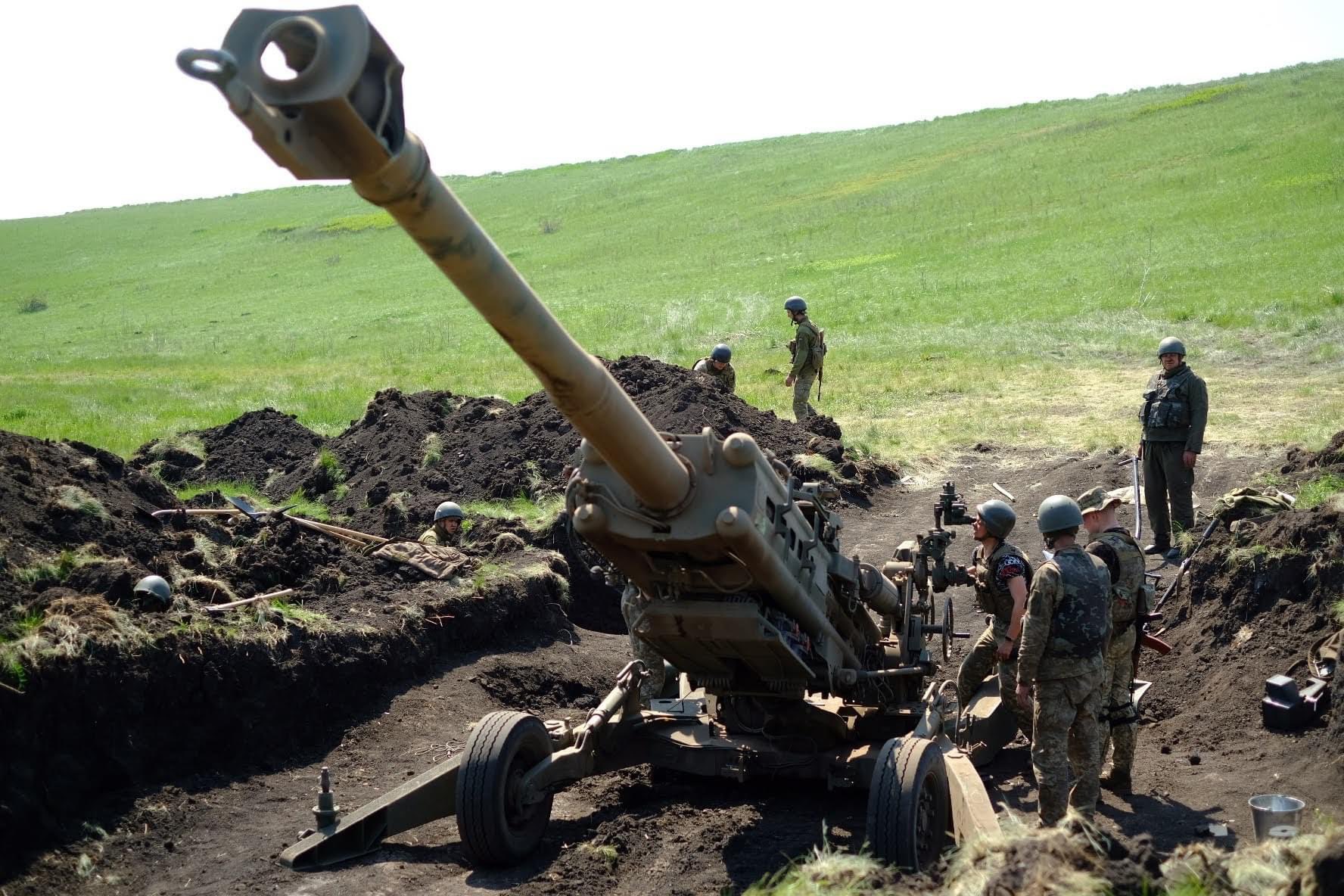 Ukrainian service members firing a M777 howitzer on an unspecified front in the Donbass region. Source: the Ukrainian Ministry of Defense.

On November 5, the RIA Novosti news agency released footage documenting a pinpoint strike with a Lancet loitering munition on an M777 howitzers of the AFU on Nikolaev front.

The strike was carried out with the improved version of the Lancet-3, which has an endurance of an hour and is armed with a warhead weighting five kilograms. It is also equipped with an elector-optical system that allows it to detect, track and lock on static and moving targets.

On November 6, Russian sources shared another video showing the destruction of two more M777 howitzers of the AFU, this time on Donetsk front.

The howitzers were apparently located by an Orlan-10 drone, which has a flight duration of 16 hours and a range of 140 kilometers. The drone can be equipped with several types of sensors to carry out different missions including reconnaissance, 3D-mapping, electronic warfare and communication relay.

The M777 howitzer has a maximum rate of fire of seven rounds per minute with a range of up to 40 kilometers when firing Excalibur precision-guided rounds.

The AFU received 162 howitzers of this type after the beginning of the Russian special military operation in Ukraine. The United States provided 152, while Canada provided four and Australia six. All howitzers were reportedly delivered between May and October.

The Russian military has already destroyed or damaged many of Ukraine’s newly-acquired M777 howitzers, in most cases with drones and artillery fire.

Ukrainian forces are still outgunned by the Russian artillery. The U.S. and its allies in the West don not apparently have the resources to solve Kiev’s artillery problem.

Those howitzers are sitting ducks. Russia is thoroughly degrading NATOs ability to wage war. Looks like a bunch of amateurs are running NATO now since they’re allowing their most advanced weapons systems to be blown to bits in a piecemeal fashion.

Nobody said less than a week retard. Btw, how is your monkey pox treatment going?

Ukrainianism is a cancerous tumor and Russia should destroy it cell by cell.

Russia is the only hope for Europe.

Pooland and the Baltic States might come to their senses after the rest of the Europe cuts their USA induced crap and start doing good business with the good Russian businessmen in a real currency like the ruble is.

Wait for the marshal russian Winter when all foliage is gone. Russians destroyed far more ukrap ‘technic’ by an average of 7 to 8. But the toilet paper money mill is printing…..and they will keep coming. Without cutting the supply lines in a way or another, this war of ‘mobile attrition’ will continue indecisively. There are a few options for the russians to cut murican transport: 1. A Belarus joint offensive throw Lvov -viable but have many unpredictable factors. 2. A big in depth bombardment campaign of related infrastructure -very viable but need huge amount of precision missiles which Russia now must delegate on other parts of the frontline 3. A short constant very aggressive bombardment of energy grid till complete destruction -the most viable one and the best one, especially having multiple ‘collateral damage; over banderist nazi bastards. 4. A great luck for a Taiwan starting war -same very good but it’s about time and timing; So, I wait for the Putin tuesday meeting with the Council when in the very good tradition of denazification, MoD will felicitate Kiev faggot whores with another batch of electricity off greeting card.

USA is a shithole, EU is becoming one
Reply to  Khohol cannon fodder

Russia is not convinced yet to get rough on ordinary Ukrainians. Otherwise it would be logic to level flat Ukronazy cities, town and villages, destroy their infrastructure than move in with great force, even temporary retreating forces from other theaters like Syria, bringing African, Chinese, Indians and North Korean fighters etc. Chinese might find a better living on the front than in their permanent futile covid lockdowns. There might be tens of thousands, hundreds of thousands ans even millions of young people all over the world ready to take a gun for a retirement fund and a petch of land in Russia, eventually in the Ukraine they conquer 🥳

Fake
Reply to  USA is a shithole, EU is becoming one

No one wants to move to Russia Shithole. So, no one will do what you said in the second part. As for the first part: how is Russia supposed to fracture NATO if it moves militarily as fast as you say it should. How will it consolidate OPEC under it if it wins the war tomorrow? How will Russia encourage more nationalistic ideological thinking in its youth without a nationalistic struggle today? “War is the continuation of politics by other means” – An old German Guy, whose dick measured 1.8L, 1.2W, 34 degrees yaw (or the angle of the shaft)

USA is a shithole, EU is becoming one
Reply to  Fake

I would move to Russia if given land with forest. I do not know the language and I am from a NATO country so they would not let me in. I would rather die for Mother Russia than work for NATO scum.

How many former citiznes of the failed Ukrainian CIA project have moved to Russia since 2014?

US and UK have been killing and genocide 6 million of innocent peoples in The Middle East lol.

NATO terrorists
Reply to  USA is a shithole, EU is becoming one

Outdated weapons. So far I don’t see the US with Hypersonic weapons. Talk about lagging behind the competition. Which shows me that your comments are coming out of your ass

I just personally want to see about 60 A-10s enter Ukrainian service. I just think it would be cool to watch them eat Russian artillery positions alive. Or it would be cool to see what an S-400 can do against an aircraft that was built in the last 60 years anyway. I haven’t seen a war this boring since WW1. That’s totally working in Russia’s favor but it’s so boring. Do you think Russia forces could hold up to 120 Apache helicopters hunting them. IDK. But damn it would be cool to find out. Let’s be honest no one is sending their best and brightest off to this war are they? When did the last rich kid die in Ukraine? The soldiers are scum and they need to be gotten rid of, can we at least make it entertaining please?

Kool and boring maybe you should volunteer and join your fellow Nazi scum and find out.

Well, that’s not the side I’m on though is it?

This isn’t call of duty buddy

No doubt, so what about those Apache’s though? I’d like to watch the gun footage on those things hammering Russian columns with 30mm! That’s what the war is about after all right? Who has the bigger dick and the best equip? Let’s see some of the big stuff go out the door. Toss in some NATO troops and techs, who cares? The elephant in the room here is can Russia stand up to NATO? So, let’s find out. Why play just the tip? Just make one nice change to everyone’s nuclear doctrine of no civilian targets. Other than that, kill away. Kill each others leaders, kill each others armies, kill each others aristocracy and we will all just sit and watch. If you’re in the army you agreed to this shit. Have fun. Same for the politicians. The world looks on and doesn’t care.

USA is a shithole, EU is becoming one
Reply to  Fake

NATO troops like those French guys who cut their throats with scissors in Bucharest hotels? 😅 And complain how terrible is life at Cincu, where they are in camping conditions better than the living standards of 60% of the Romanians they exploit for USA benefit?!

The Leclerc tanks lost on the way, Americunts keep partying around… Now that’s an army! A drugged, LGBT, Call of Duty trained army!

Last edited 3 months ago by USA is a shithole, EU is becoming one
-3
Reply

i wonder
Reply to  Fake

russia shoots down about 30 mlrs on a daily basis on top of the aircrafts drones and helicopters. enemy attack helicopters wil have a higher priority, so more assets are assigned then the rag tag army on a hobscots armored car offensives that have been happening. the range of the s series is such that multiple systems would be engaging from all around ukraine. the newer systems even have the ability to find and take down low flying craft

Putin bitches tears taste like heaven
Reply to  i wonder

Dave
Reply to  i wonder

Sure. Russia has already destroyed the entire NATO military three times over. Seriously. They may well have their successes, but unless that is measured against their losses, all such talk is meaningless.

this war has turned into a stalemate

why not try and find that batteries commander. probably the only person who knows how to do the calculations. if they run out of those willing to go tho the ukraine they will stop sending the guns

There is about 60,000 Russian reserves on the front now. Donbass is getting a good push but notice they will just go a steady pace and wait and see what the US midterms presents. Germany may headed in a more different direction after accepting they are nothing more than a nutured US vassal. Russia can sit back and watch this geopolitical mess unfold.

USA is a shithole, EU is becoming one
Reply to  Kbm

I want Annalena burned at the stake in front of Brandenburg gate. 🥳

Just love to watch USSN tax cattle IOU fiat filth Saudi Mercan petro dollah $crip siZZle, flare and burn as these wilting titanium shit sticks and their rat basturd crews get reduced to smoke and ash. Is it just me?

Z and more Z until the evil angloZionaZi empire of shit is permanently flUShed.

Russia must be suffering tremendeous losses. Why else would they be silent about it? They advertise any hit against Ukrainian forces but are totally silent about their own losses. If things were so great, they’d be more open. Nah, Russia is going down.