In August 2020, the diplomatic relations between the EU and Russia appear to be deteriorating.

Early on in the month, Slovakia expelled three Russian diplomats for “a serious crime”, with local media reporting a possible link to the murder of a former Chechen rebel in a Berlin in 2019.

“I can confirm that a decision has been taken to expel three employees of the Russian Federation embassy in Slovakia,” Juraj Tomaga, head of the foreign ministry’s press service, told AFP. “According to information from the Slovak intelligence services, their activities were in conflict with the Vienna Convention on Diplomatic Relations,” he said.

Tomaga also said that a visa issued by the Slovak consulate in St. Petersburg, Russia had been misappropriated, claiming that “a serious crime” had been committed on the territory of another NATO and EU member state.

In response, the Russian Foreign Ministry, according to local media, said Moscow would react to the expulsions “in a similar way.”

According to Slovak media, the Slovak consulate in St. Petersburg issued visas last year allowing entry into the European Union of a Russian citizen later suspected of having killed Zelimkhan Khangoshvili, a Georgian of Chechen origin, in Berlin’s Kleiner Tiergarten park.

German police arrested a suspect shortly after the shooting, and in June this year prosecutors accused Russia of ordering the murder.

Moscow denied having any relation to the murder. Regardless, even before that in December 2019, Germany expelled two Russian diplomats, and Russia expelled two German diplomats in response.

On August 17th, 2020, the Charge d’Affaires of the Netherlands in Russia D.Bakker-Kühling was summoned to the Russian Foreign Ministry.

A strong protest was expressed to the Dutch side in connection with the discovery of tracking equipment in the service car of the assistant to the Russian military attaché in the Netherlands.

The Dutch diplomat was told that it is necessary to immediately take comprehensive measures to prevent such incidents, which run counter to the provisions of the Vienna Convention on Diplomatic Relations.

Earlier, Russian Foreign Ministry spokeswoman Maria Zakharova said that the Dutch authorities are using Russia to create an image of an enemy instead of fighting common problems.

The diplomat spoke about the anti-espionage memo issued by the Dutch intelligence and security service. Zakharova noted that the document contains information about the Russian and Chinese special services, allegedly operating in the country.

“Spy hysteria is entering a new round,” she said.

Finally, on August 24th, Austria has for the first time declared a Russian diplomat to be a “persona non grata”. He has to leave Austria by September 1st.

This is the first result of a new spy hysteria, which the local authorities consider to be particularly serious.

The Russian diplomat has allegedly carried out industrial espionage in a high-tech company for years with the support of an Austrian citizen.

Austria already had controversial affairs with Russia in 2020.

Moscow was accused of being behind an alleged massive cyber attack on the Ministry of Foreign Affairs, which “skimmed off” its IT systems.

Then there was Salzburg trial of an army officer accused of spying.

Finally, the death of Mamichan U. alias Martin B., who was was shot dead on company premises on the B7 in Gerasdorf not far from the Vienna city limits in July.

He was a very voiced critic of Chechen leader Ramzan Kadyrov online.

Although the 43-year-old expressly refused personal protection, his apartment in Vienna-Donaustadt was observed. His consent was not needed for him to be under surveillance, and it still didn’t lead to anything since he died and it is unclear who killed him.

Austrians were always bootlickers.
Its worth to mention that if not for Russia, Austria wouldnt exist today.
They helped them in 1849, and in 1945.
Unthankful bastards.
Sacher cake is delicious tho…

I’m a Kaiserschmarnn fan (shredded pancakes with powdered sugar and fruit). Yes Oesterreich is just a small speck (~ 9 million souls) caught in the middle of the Russia vs. NATO/EU/Washington idiots war of endless provocations and intimidation. They have to do what they can to survive. Unfortunately for them, Austrian presidents and chancellors can’t shake off the pants suit Merkel’s influence next door despite their collective disastrous history in two world wars. As a member of the EU and eurozone, they have lost a large part of their sovereignty.

watch your words. the last thing the world needs right now is an angry Austrian. we all know how it usually ends.

Oy gevalt…
You are right ?

Merkel is Polish – not Austrian…

Schleicher was German, that didn’t stop the Austrian

Putzi Hanfstaengel was American, Hjalmar Schacht was Rothschild.
Most of the other were Frankist Jews – didn’t stop anything either…

For some money doesn’t smell

AM Hants
Reply to  Sauron

Yep, Russia sends them back to Berlin, looking stupid.

He was killed by a globalist…

Not. Gavrilo Princip was a Bosnia-Serbia nationalist. Wanted to get rid of an Austrian occupation force.
“”I am a Yugoslav nationalist, aiming for the unification of all Yugoslavs, and I do not care what form of state, but it must be freed from Austria.”

He was a marxist anarchist aka globalist.

Russia has been lenient with these puny EU quislings for far too long, it is time to expel all their spies who operate in the guise of media, NGO’s, diplomats, academics, students and tourists.

I knew it. I knew and I said Putin would also interfere in Austria’s democratic election. Why?
Because Putin hate democracy and envy our democratic values that WE have in the West and what Russia dont have.
Therefore Putin has his big grabs down where he should not have them, breaking all International usury rules of order. 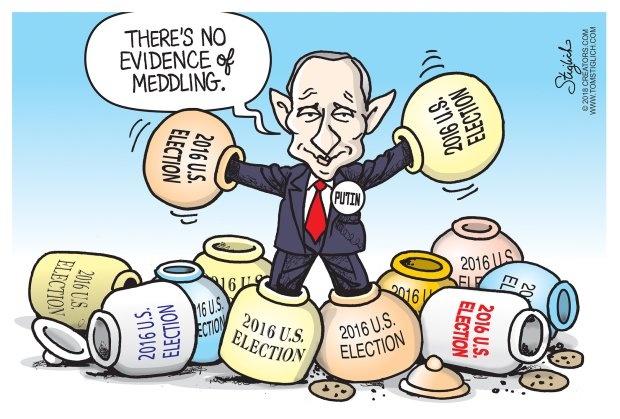 Im not sure everyone will understand your sarcasm…

Thats why in a federation a subject should not be allowed to conduct any foreign relation. Otherwise anywhere a guy like Ramzan can mess it up for the whole federation

Same old same old,notice its always the West who instigate the trouble.

Thats all the thanks Russia gets for liberating Austria in the War from the Nazis,oh wait, many of them WERE Nazis.

If Russia sells weapons to Iran, then we need to kick out every Russian diplomat from Israel.

You have already “neutralised” a Chinese Ambassador.
Im sure the many Russian Oligarch billionaires in Israel can save Russian diplomats from the same fate yes?

Maybe they can, but they can not bribe the people’s feelings.

The murky world of diplomacy and espionage – like the Cold War – except this is not the Cold War: that is the miscalculation of those who think this crisis will automatically end the same way. Russia has no significant buffer zone: there is nowhere to go but fight. The warnings of history are being ignored.
https://www.ghostsofhistory.wordpress.com/

Sound like another fake news narrative of the kweers,why? Because the dead were pro zio teorrists!