Russian Deputy Foreign Minister Sergei Vershinin made an important statement signaling that the Syrian-Iranian-Russian alliance is going to deal with militant groups  in southern Syria using a military option.

According to Vershinin, over 40% of the so-called southwestern de-escalation zone is controlled by terrorists. The statement clearly justifies a military operation of the Syrian Army in the area and comes amid already ongoing clashes southeast of Daraa.

Over 40% of Syria’s southwestern de-escalation zone are still controlled by terrorist groups. Nevertheless, ceasefire talks are underway with those groups that distant themselves from terrorists, Russian Deputy Foreign Minister Sergei Vershinin said on Monday at the UN Security Council debate on the situation in the Middle East and North Africa.

“I listened attentively and respectfully to all who spoke before me, including esteemed representatives of the United Kingdom and the United States who voiced their concern about what is going on in the southwestern de-escalation zone,” he said. “Ceasefire talks are underway in this area with those opposition groups that distant themselves from terrorists. War on terrorists continues.”

“However, we regret to say that more than 40% of the territory of this zone are still controlled by Jabhat al-Nusra and Islamic State groups (both outlawed in Russia as terrorist organizations,” he noted, adding “uncompromised fight on terrorists in Syria must be continued until they are completely exterminated.”

“Russia, like other Astana process guarantor nations, has made a really weighty contribution to the stabilization of the situation in Syria,” Vershinin said. “I would like to stress that Russia is firmly committed to its liabilities, including in what concerns cessation of combat operations.”

He stressed that now it was time to “focus on the United Nations-brokered political process in Geneva, for which ends constructive efforts of all external players will be needed.”

“No one has done more to stop hostilities and bring down violence in Syria than Russia and its Astana process partners. At least, not those countries that are helping illegal arms groups, providing them with weapons and money,” the Russian diplomat noted. “Despite its obligations, the United States has done nothing to support anti-terrorism efforts over the year that has elapsed since the establishment of a de-escalation zone in southwestern Syria.”.

Your Yahoo article is fake news, for Syria does not drop barrow
bombs on residential areas.

Two links from 2015, your the one playing pranks.

Were all trolls here.

Ok so what if he did drop barrel bombs it was an all out do or die military emergency had to hit the enemy whenever possible. Given the circumstances civilian casulties were acceptable. If were being honest.

My turn to rephrase you are an ASSHAT !!!

#FAKE NEWS, story has no truth to it but claims of FSA and terrorists using chlorine and “Hell cannons” for their delivery are true on civilian and SAA soldiers!!

I hope not, who would drop a large burial mound on people that explode!!??

wait a sec, you probably just gave the CIA and the pentagon a new propaganda weapon.

dropping clusters of dead bodies from planes and then accusing the SAA (or whoever) to kill civilians. I’m positive that it’s something that has at least passed through, and probably stayed in, some of the brightest minds at Langley.

Nah leave him, he nothing more than white helmet who screaming about nonsense propaganda including unlimited last hospital

Yahoo is compromised. They lost all their users data.

“Russian Deputy Foreign Minister: Over 40% Of Syrian Southwestern De-Escalation Zone Controlled By Terrorists”
…. And 1/3 on NE Syria, under the umbrella of US troops there.. But the Russki may not add this, because of the Bibi-Putin newest love-story

Empire USA is beloved and worshiped by all the world,
for it is taking humanity to heights of power and glory
where no man has gone before.

I love the ongoing pathetic attempts at Bibi-Putin-lovefest gaslighting. Nettanyahu walking a pace behind Putin during his visit told me all I wanted to know about their ‘relationship’. I would imagine their most recent ‘date’ in Moscow went something like this:

Putin no doubt sat there during their meeting ‘date’ pressing his fingertips together like he always does during an unpleasant meeting, staring at Nettanyahu and politely listened to every last damn thing the bastard had to say. The slimy Nettanyahu would have kept badering Putin with confirmations in order to ‘close the deal’ and have him make some ridiculous agreement regarding Syria. Putin – if history is any indication – would have ignored the questions and instead turned it right back on Nettanyahu, imploring him to ‘explain further’ or asking him what he would do or what the Americans really think. Nettanyahu wouldn’t be able to resist the opportunity to keep talking. He likes to do that. Talk… and to wave his hands around to emphasize his anger and exasperation at the rest of the world. He would have grown increasingly agitated at his failure to get Putin’s agreement on something. Anything.

Granted, Nettanyahu’s arguments are compelling to most low-life politicians in other countries. Bibi is like a famous but degenerate used-car salesman… and he’s backed by a particularly violent and ruthless mafia. It’s easy to just agree with him. Trouble is that that he was sitting across the table from a former KGB lawyer – one that resented the years he had to spend in East Germany looking over the shoulders of the thoroughly-Khazarian-ized spineless STASI two-bit mobsters and their pathetic eavesdropping program on their own citizens. Putin wouldn’t have been intimidated, but rather nauseated with Nettanyahu’s yammering. I don’t think worrying about Israeli threats ever keeps Putin up at night either. He has plenty of capable muscle backing him – muscle that would make Mossad punks pee their pants (if they ever saw it coming, but they wouldn’t).

So the Moscow meeting date between these lovers probably ended abruptly with Putin standing up, cutting him off and announcing to a surprised, blubbering Nettanyahu that they have talked enough and he understands Nettanyahu’s position thoroughly. On the way out the door, Putin pats his bewildered sweetheart – Nettanyahu – gently on the back and whispers in his ear, “Russian planes will soon be bombing Daraa and Russian troops will be there accompanying the Tigers, Hezbollah, the Ayatollah himself or anyone else we God damn please. I understand you object to this, but you understand that I will protect them at any cost from your shitty little country… honey. You wouldn’t want to make me angry, would you? Now go back home and be a nice, quiet little bitch. Russia is not Gaza – don’t fuck with us.”

Ahhh… everyone enjoys a good love story with a happy ending.

Putin below [thinking to himself]: “Jesus… this idiot just WILL NOT stop TALKING. I though he already left – how did he get back in? Maybe I should Judo chop that fucker in the neck? Nyet… that would probably be rude. Note to self: bring more opioids to next Nettanyahu meeting. A LOT more – the pain is excruciating.” 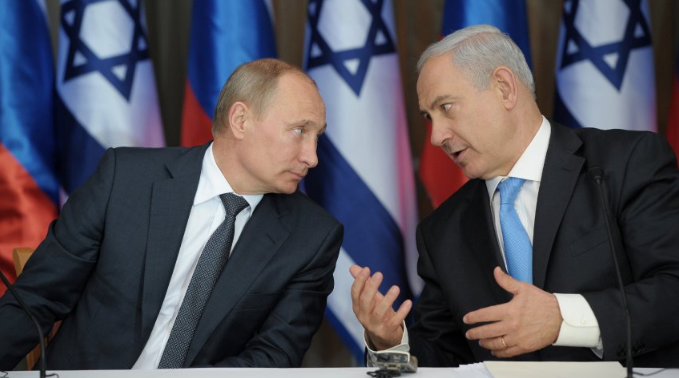 Lol! Those KGB old school nails consider pain to be just another type of fuel (energetically speaking) and should not be avoided but used to finish objectives. Pain killers are needed for mossad and cia. :)
On the serious side – when I saw Bibi walking in Immortal Regiment surrounded by million of people that he hates it was very telling. Bibi was visibly scared but kept walking. Despite what Jew media say to western sheeple, Bibi actually knows who saved their sorry a$$ from ovens in 1940s and may be he hopes that Russians will do it again. Many say that Israel is ruling US and while this is true in many ways but lets not forget that Israel itself is under strictest supranational governing and it is doomed – they will be wasted once again. Rumors are that next holocaust will be the last. Bibi knows that he leads his people to slaughter but no one is asking his opinion. Global predictor is moving centers of power concentration from US/UK to China/Iran – if that assumption is true (lets ponder this) than what would be fate of Israel?

YES! Agrees. Putin is NOT working with ‘israel’. I don’t know why some people would even contemplate such folly.

The couple-month old troll campaign appeals to people with a simple-minded view of foreign relations. They can’t possibly understand all the moving pieces in Syria, and how Russia got stuck cleaning up the impossibly fucked up situation the US created there and continued to make worse. Magnier explains Russia/Putin’s role best in this great article:

Russia is in the Middle East to Stop the War, Not to Participate in the Conflict Between Iran and Israel

Magnier’s take on it of course, but it all seems pretty reasonable. This pisses off the otherwise simple-minded, who are confused by “Why doesn’t Russia start f’king WWIII to protect Syria from Israel and the US? Putin sold out Syria!”

(Not picking on you specifically, Siegfried. It’s just how I feel about “Bibi-Putin newest love-story” nonsense. You’re certainly entitled to your opinion otherwise.)

“thoroughly-Khazarian-ized spineless STASI two-bit mobsters” Is this an antisemite slur?

Why would you read what I wrote and think that all Semitic peoples are Khazarian or mobsters? Why would you think all Khazarian mobsters are necessarily Jewish (if that’s what you’re implying)? I have an understanding of the psychopaths that constituted the STAZI in its final years and the oligarchs that currently infest power structures in my country (the US) and Russia. I find Khazarian mobsters aptly descriptive.

Their psychosis disappears when compared to the one suffered by the CIA and Mossad.

When did you stop beating your wife?

“thoroughly-Khazarian-ized spineless STASI two-bit mobsters” Is this an antisemite slur?

you guys are not able to be satisfied, no matter how big the progress is. Think about the success if the SAA can liberate the Southwest without triggering the western propaganda, the discussions at the security council, US bombing and maybe a world war…

he is just anti-Putin anti-Russia troll
any excuse to say anything bad against Putin or Russia is what he likes the most.

Bla, bla, bla Russki, bla, bla, bla Putin-Bibi love stories, meanwhile your dreams of news and olds annexations are going to the trash, and you will have, more a couple of years, to return the Golans to Syria

As Empire USA is the most violent of the terrorist organizations in Syria,
why is it that no one is throwing a bullet their way? First things first,
that’s what I always say.

Only if NATO forces were embedded with them other than that it only applies to it’s homeland and not anywhere else or the US bases. So technically Russia could attack but the US would rely on old scaremongering tactics like they always do eg: “bad_____”( insert country here), or like when they punch you then run and cry about you hitting them, oldest tactic in the game never buy it from a bully but people and world leaders are an embarrassment to their countries in the west and fall for it easily.

because the pentagon is literally begging for their provocations to succeed.