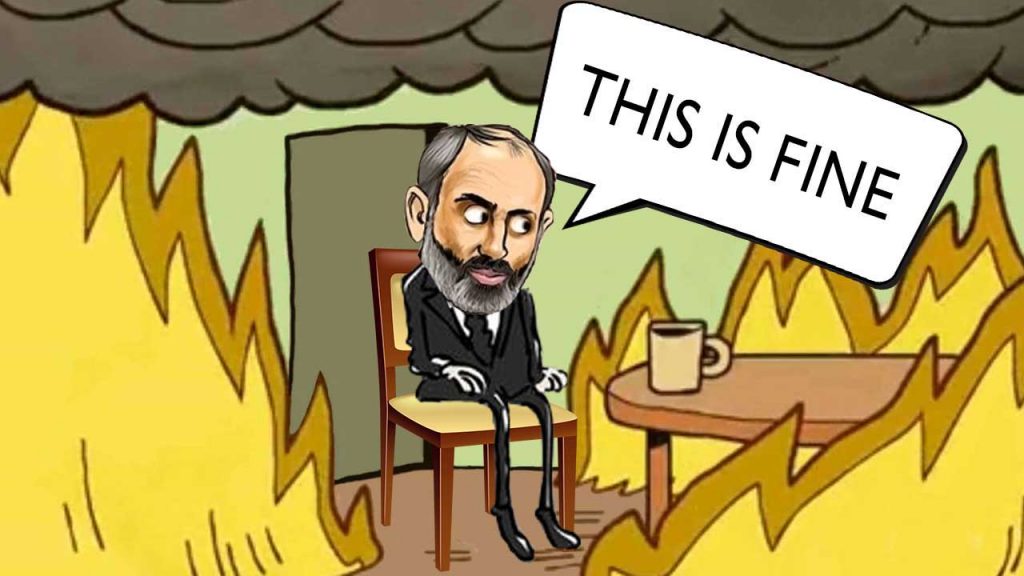 Since the morning of February 25, Prime Minister of Armenia Nikol Pashinyan has been fiercely fighting with his own General Staff in a fierce attempt to keep the power.

The entire story stared after Panshinyan tried to fire the deputy chief of the General Staff because he had slammed Pashinyan’s nonsense remarks about not working Iskander missiles during the 2020 war. Pashinyan, who was in a permanent search of execuses for his own failed policies that led to the 2020 disaster, recently found one more – ‘not working’ Iskander missiles (that were not even used, or according to Armenian social media – was used once).

In response, the General Staff, tired by the leadership of the de-facto traitor of Armenia, called on the Prime Minister to resign and rejected the decision of Pashinyan.

The Pashinyan clique even described the call of the General Staff as the ‘military coup attempt’.

Ironically, the Pashihyan government was even publicly supported by the Turkish foreign ministry that warned against coup attempts. It is interesting to observe how Pashinyan supporters missed this interesting signal about the real posture of their leader.

By the evening the situation has reached the point when the Russian Defense Ministry had to comment on the situation:

The Russian Defense Ministry, with bewilderment and surprise, got acquainted with the statement of Prime Minister of the Republic of Armenia Nikol Pashinyan that Iskander missiles used in Nagorno-Karabakh by the Armenian Armed Forces “did not explode or only exploded by 10%.”

According to the objective and reliable information, also confirmed by the objective control system, none of missile systems of this type were used during the conflict in Nagorno-Karabakh.

All missiles remain in the warehouses of the Armed Forces of the Republic of Armenia.

Apparently, Prime Minister of the Republic of Armenia Mr. Nikol Pashinyan was misled, as a result he used inaccurate information.

The 9K720-E (Iskander-E) operational-tactical missile system has been tested and successfully used many times against international terrorist groups in combat conditions in the Syrian Arab Republic.

This gives us a full reason to assert that the 9K720-E Iskander-E missile system produced in Russia is the best in its class in the world.

This is recognized by everyone.

After this statement, Pashinyan immediately phoned Russian President Vladimir Putin. According to the Kremlin, the sides discussed the situation in Armenia and Putin “spoke in favor of maintaining order and tranquility in Armenia, resolving the situation within the framework of the law”.

However, the Russian leader did not declare support to the current Armenian government, which has been consistently providing a provocative anti-Russian policy. This policy already undermined the regional position of Armenia as they almost broke relations with the guarantor of its existence and the key ally, led to the disaster in Nagorno-Karabkah and triggered the permanent political crisis in Armenia. Despite this, the pro-Western Pashinyan-branded clique continues to struggle for its power pushing the country towards the collapse.

If Russia weren’t so entangled in business and partnership with the terrorist Ziocorporate globalists, they would’ve helped design a coup to take out Pashinyan regardless of the consequences and EU/US/NATO terrorists’ sanctions or whatever.

Turkey is not buying much Russian gas, and Russia will soon have an answer for that. Erdogan is buying gas from other sources.

He is stealing oil from Syria.

That doesn’t excuse cia/soros now does it,Putin is too smart for satanic low iq degenerates! You think it’s easy to give life away and not live up to promises made,Eurasian stocks up!

Nothing’s as easy as the bullshit coming to the tip of your fingers to shill for Ziocorporatism.

To show Pashynian if Iskanders work, Armenian armed forces should fire such a missile targeting Pashynian and his entourage.

Seriously, the Armenians have to be the worst bottom feeders on the planet. This Soros and Jew installed cowardly idiot Pashinyan presided over the worst military defeat in recent history, compared to the Egyptian rout in 1967, even they killed their “Field Marshall” Abdel Hakim Amer (suicide officially). The Armenian cowards did not even mobilize to fight, they just dropped their weapons and did a Caucasian sprint faster than Usain Bolt without firing a shot. Armenia does not deserve to be a country or Russian protection. Disgraceful a$$holes.

Jesus
Reply to  Just Me

Russia is in Armenia to thwart Turkish influence in Caucasus, and be in a position to interdict any Turkish pipelines transporting natural gas and oil from Central Asia and Azeri.

To a people who are used to play checkers, sure..

CIA/checkers* Indeed. Thankfully we have adults in the room too to keep the Crumbling satanic pedo empire in check.

The Russians have been under the world government since the collapse of the Soviet Union.

Iskander is like the best (short-range) missile, in all aspects, especially cause it’s almost impossible to intercept

he is better than Erdogan

Iskander is the first missile in history to be certified hypersonic, the rest of the world looks at it with envy, even today, after 15 years of honorable service, the enemies are still unable to build a competitor.

Nato has a new secret weapon that will defeat all Iskander’s . NATO’s secret weapon is most of its general population who believe all the shite that their cyber warriors spew out.

NATO will WIN in the eyes of their ‘blind’ populations and that’s all that seems to matter these days. Especially as most NATO citizens have the attention span of a knat.

Too bad it’s sponsors are now in their own self destruct quagmired fkfest,bring on Eurasia!

Well well well… CIA vs FSB agents acusing eachother of treason, I think both are right.