The Russian Defense Ministry has commented on the statement of the US Department of State and explained ‘radical differences’ between situations in Aleppo and Mosul. 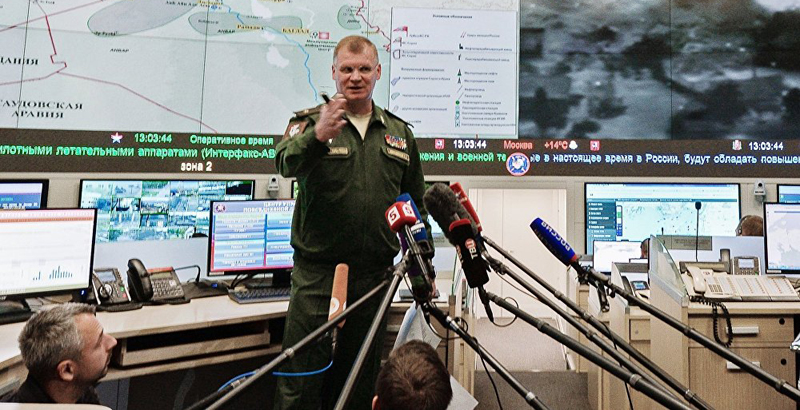 The Russian Defense Ministry has commented on the statement of spokesman for the US Department of State, John Kirby, about “radical differences between the situation in Aleppo and the operation in Mosul,” the RIA Novosti news agency reported.

“Radical differences between the situation in the Syrian [city of] Aleppo and the operation to storm the Iraqi [city of] Mosul really exist. And we are ready to particularize them for Admiral John Kirby,” spokesman for the Russian Defense Ministry, Major General Igor Konashenkov, said.

“The Russian Aerospace Forces and the Syrian air power do not operate in Aleppo for more than two weeks, while Mosul is daily struck by the US B-52H strategical bombers, as well as by the F/A-18 combat jets and the Rafale M aircraft from the Dwight Eisenhower and Charles de Gaulle aircraft carriers. Only during the past day, the coalition conducted 25 sorties, carrying out 21 strikes on Mosul and its suburbs,” Konashenkov noted.

In addition, “in Aleppo, Russia and the Syrian authorities organized six humanitarian corridors for civilians, who are ready to leave the city, but cannot do this because of mine-laying of the approaches and shelling by militants.”

“In Mosul, we hear about a forthcoming ‘storm’ of urban quarters, inhabited by civilians, with vague, but extremely worrying consequences due to massive victims,” Konashenkov said, adding that in this case “they [Americans] are not talking about any humanitarian corridors like the millionth city is inhabited only by terrorists.”

Also, the coalition declares an ‘iron ring’ in Mosul, while there still are 2 corridors for the exit of militants in Aleppo.

And, finally, representatives of the UN, the Red Crescent and other international organizations, as well as journalists work in Aleppo, while “by a strange coincidence, there are no journalists, no activists, no volunteers of ‘white’ or other rainbow colors ‘helmets’ in Mosul. There is nobody,” the general stressed.

“All that American and European media can afford is sprightly censored reports about extraordinary successes of the coalition and the forthcoming great victory over terrorists, not confirmed by real footage,” he added.

“And, after this, insulted John Kirby claims that in contrast to Aleppo, the operation in Mosul is held in strict accordance with the international humanitarian law,” Konashenkov concluded.

John Kirby= looks like the biggest liars on earth. Shame for Americans to have a spokes man like him. Mr John should be sent to siberia to teach Dolphin …. how to speak English.

Don’t forget those 9,000 ISIS terrorists that were transferred into Syria just before the storm began, all with Saudi help and US omission.

Be a good idea for those countries that are victims of US regime change and proxy wars to do the same on US territory, then lets see how they like it. Wouldn’t be difficult to establish.

One of the main differences is that ISIL won’t try to break the siege of Mosul because they don’t have resources to do so. Also the proportion of troopers in Aleppo is very similar among the factions, but in Mosul, Daesh is largely outnumbered